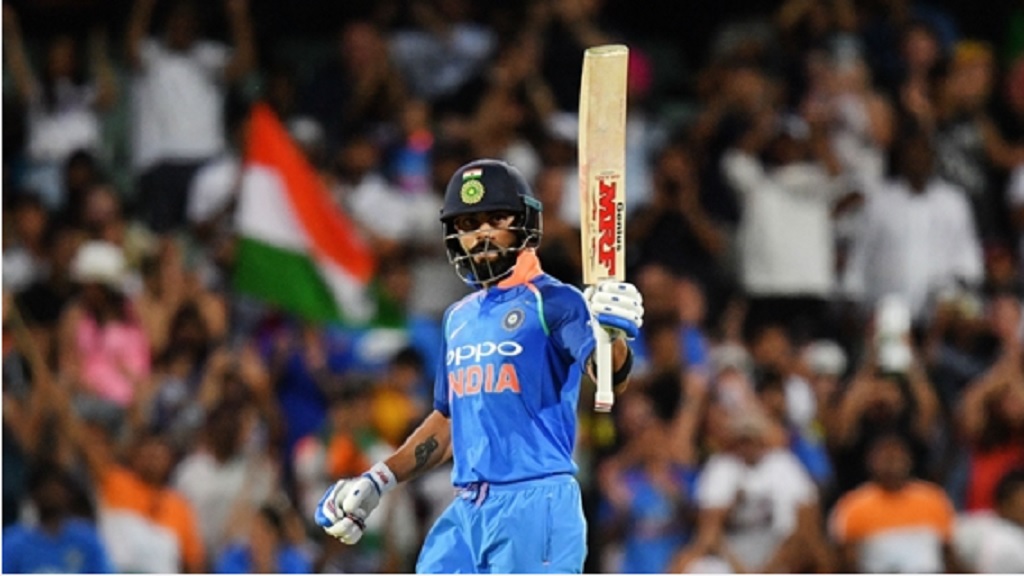 Virat Kohli produced another masterclass as he made his 39th ODI century in Adelaide to help India record a six-wicket win over Australia, levelling the three-match series at 1-1.

Kohli's sublime 104 anchored India's response in Adelaide after Shaun Marsh hit a magnificent hundred of his own to give Australia hope of securing a first ODI series win in two years.

Marsh was dropped for the upcoming Test series against Sri Lanka, but followed up his half-century at the SCG with a brilliant 131 from only 123 balls in Australia's 298-9.

India set up a decider at the MCG on Friday with a superb run chase, Kohli and finisher MS Dhoni (55 not out) getting the tourists home in the final over after receiving treatment as the searing heat appeared to take its toll.

Aaron Finch (6) failed again after winning the toss and opting to bat first, before fellow opener Alex Carey was removed by Mohammed Shami (3-58) in the next over.

Marsh and Usman Khawaja (21) steadied the ship in a third-wicket stand of 56, but a direct hit from Ravindra Jadeja dismissed the latter after he was dropped by Dhoni off Kuldeep Yadav.

The powerful Marsh continued to pounce on anything short, striking debutant Mohammed Siraj for two boundaries in an over and reaching 50 before Peter Handscomb was well stumped by Dhoni.

Marcus Stoinis (29) hit Shami for back-to-back boundaries but the seamer had the last laugh when he was caught behind, leaving Marsh and Glenn Maxwell (48) to step on the accelerator.

Marsh reached three figures in the 42nd over and Kuldeep was dispatched over the ropes by both batsmen as Australia started to motor, the centurion also hitting Shami and Bhuvneshwar Kumar for six.

Maxwell and Marsh both fell in the 48th over from Bhuvneshwar, but big hitting from Nathan Lyon helped lift them towards 300.

Shikhar Dhawan (32) was looking ominous before he was taken by Khawaja, and India were 101-2 in the 18th over after Stoinis saw the back of Rohit Sharma for a patient 43.

Kohli batted responsibly, content to rotate the strike in a third-wicket partnership of 59 with Ambati Rayudu, who appeared to feel the pressure when he holed out to Maxwell.

The skipper went on the attack after reaching his half-century, smashing Jason Behrendorff for six over long-on and using his feet superbly to give himself room to launch Lyon for a maximum.

Although the runs dried up for Kohli and Dhoni as the Australia bowlers put the brakes on, the captain moved on to three figures from 108 balls with two off Peter Siddle, then struck Jhye Richardson to Maxwell at deep midwicket.

India needed 57 off 38 balls when Kohli departed and they got home in the final over, Dhoni - who needed treatment late in the run chase - hitting his second six to reach 50 and winning it with a single after Dinesh Karthik (25no) provided great support.