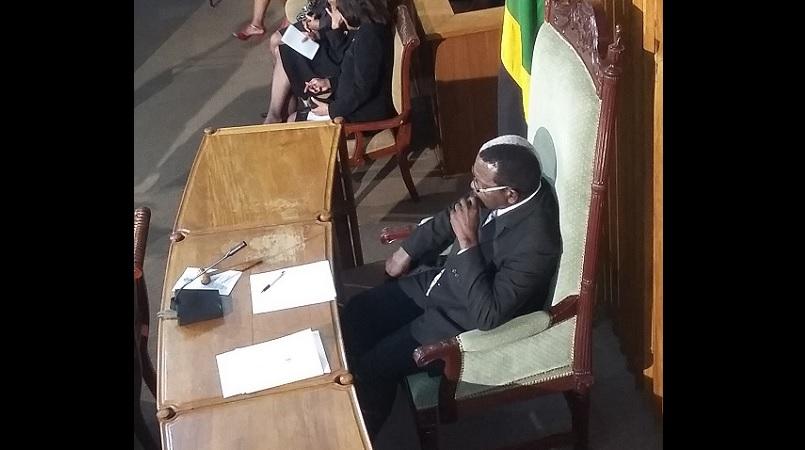 A censure motion has been moved against Speaker of the House of Representatives, Pearnel Charles, over his handling of the tabling of the damning Auditor General’s Report on the Caribbean Maritime University (CMU).

The motion was moved by Opposition Member of Parliament (MP) for South East St Andrew, Julian Robinson, who is also General Secretary of the Opposition People’s National Party (PNP), during Tuesday’s contentious sitting of the House.

Moving the motion, Robinson argued that Charles had brought the office of speaker into disrepute.

And, as the CMU scandal continues to take new twists and turns, it has emerged that the AG’s report was received by Parliament prior to the January 14 sitting of the House, when Charles indicated that he would not be tabling the document. He also suggested on that day, when asked by Dr Morais Guy, Leader of Opposition Business in the House, that he had not yet received the document.

Although Charles bowed to pressure after he was widely criticised in the media, and had the document tabled during Tuesday’s sitting of the House, the two dozen copies that were divided between Government and Opposition MPs were not tabled until approximately 4.50 pm.

That was after Government and Opposition MPs clashed on several occasions during the sitting, with the Opposition at one time appearing to be on the verge of a walkout.

Whereas the Auditor General’s Report on the state of affairs at the Caribbean Maritime University was delivered to the House of Representatives prior to Tuesday, January 14, 2020.

And whereas on receiving the report, the speaker had an unconditional duty under section 122 (2) of the Constitution and under section 29 (2) of the Financial Administration and Audit Act, to cause the Report to be laid before the House.

And whereas the speaker… during the sitting of the House on Tuesday, January 14, 2020, and in response to a query from the Leader of Opposition Business in the House as to whether the report would be tabled in the House in that sitting, stated that he would table the report once he received it, thereby misleading the House by erroneously and unequivocally suggesting that he had not received the report.

And whereas the speaker, during the said sitting of the House, thereafter told the Leader of Government Business in the House (quote), ‘Mi nah lay it tiday…”, which remarks were picked up by an open microphone and reported on in the media.

And whereas the speaker thereby committed an egregious breach of the established rules of conduct and conventions of the House by misleading the House on a matter of great national importance.

And whereas the speaker thereby brought the high and noble office of the speaker into disrepute, be it resolved that the Member for North Central Clarendon be censured for the aforementioned conduct.

And be it further resolved that this matter be, and is hereby referred to the House’s Committee of Privileges, for its immediate determination prior to the next sitting of the House and that there be an appropriate sanction against the member… by way of censure for his aforementioned conduct.

And be it further resolved that the speaker recuses himself from the hearing of this matter…, given the clear conflict of interest that his presence would involve.