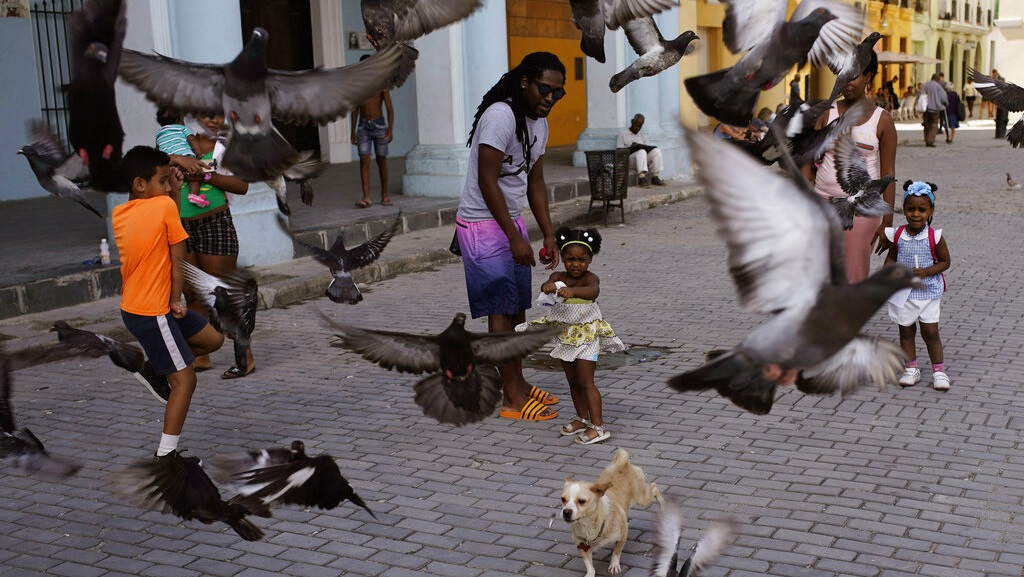 A girl and her father feed the pigeons as their dog runs amid the birds at a public square in Havana, Cuba, Wednesday, April 10, 2019. Communist Party leader Raúl Castro warned Cubans on Wednesday that they should brace for worsening shortages due to Trump administration policies, but said the island won't return to the extreme deprivation of the post-Soviet period. (AP Photo/Ramon Espinosa)

Communist Party leader Raúl Castro warned Cubans on Wednesday that they should brace for worsening shortages due to Trump administration policies, but said the island won't return to the extreme deprivation of the post-Soviet period.

In his first speech to the nation in more than three months, Castro said that U.S. pressure on Venezuela and Cuba could lead to serious shortages increasing sharply in coming months.

It has become hard to find basic goods such as chicken, cooking oil, eggs and flour throughout Cuba this year, due largely to a lack of hard currency to buy imported goods or equipment to process domestic products. State-run newspapers cut their page count last week due to shortages of newsprint, and Castro indicated that the government would engage in further cutbacks due to cash shortfalls.

"We've taken a series of decision to focus the development of the economy, and to resist and overcome the new obstacles imposed by the hardening of the economic siege," Castro said. "We need to be aware of growing problems, and the situation could grow worse in the next few months."

Cuba's centrally planned economy has lost hundreds of millions of dollars in income in recent months due to problems in deals with leftist allies and former allies. Brazil's new right-wing President Jair Bolsonaro canceled a contract employing thousands of Cuban doctors late last year. The collapse of Venezuela's economy is believed to have cost an additional hundreds of millions in cutbacks to aid to Cuba, although neither country releases figures.

Castro spoke at a ceremony in which a new constitution, approved in a February referendum, went into effect. The National Assembly is now expected to pass a series of laws updating elements of the Cuban state, ranging from the electoral system to the family code. Cuban officials say there are no major economic reforms pending for one of the world's last Soviet-style systems, despite the increasingly tough situation.

While he warned of worsening shortages, Castro said that the hunger and desperation that hit Cuba after the fall of its Soviet patron in 1991 would not return, thanks to Cuba's diversified economy — with nearly 5 million tourists a year and direct investment from Europe, Asia and Latin America.

"It's not about returning to the harshest phase of the Special Period of the '90s," Castro said. "Today it's a different scenario in terms of the diversification of the economy, although we do have to be prepared for the worst."

Along with sanctions on Venezuela, Cuba's closest ally and economic patron, the Trump administration has made it harder to visit Cuba and has threatened to allow U.S. lawsuits against foreign investors here.

Despite the pressure, Castro said Cuba would not abandon President Nicolás Maduro and his administration.

"We will never abandon our duty to act in solidarity with Venezuela, or renounce a single one of our principles, and we energetically reject all pressure and blackmail," Castro said.

Cubans complain about US visa restrictions