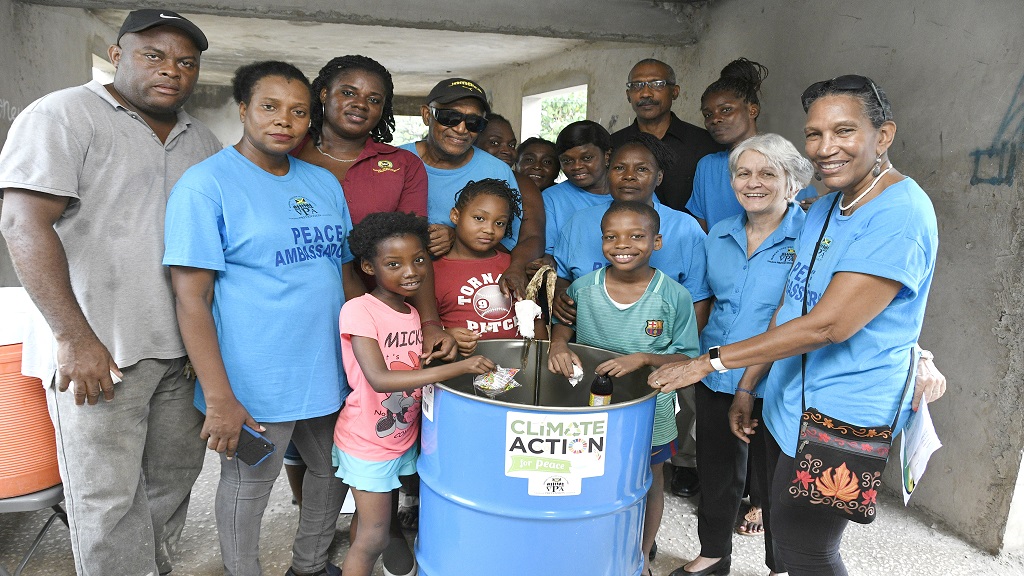 Members of the Violence Prevention Alliance (VPA) present drums to the community of Cassava Piece in St Andrew as part of their International Peace Day activities recently. Some 21 drums were donated to the community to assist with waste disposal in the community.

With the delivery of some 21 drums to store garbage across the community courtesy of the Violence Prevention Alliance (VPA) and Island Dairies Limited, residents of Cassava Piece in St Andrew have realized one of five priorities highlighted for action in its ongoing community development plan, spearheaded by the Social Development Commission (SDC).

Members of the community as well as from the VPA, SDC and other sectors gathered recently on International Peace Day to officially hand over the drums, which were placed strategically across the community.

According to Sasheena Johnson Boyd, SDC’s community development officer, the collaboration with the VPA and Island Dairies Limited to assist with the drums came out of priority planning discussion that the SDC had been having with the community.

“The VPA was invited to be a part of the discussion because of their continued presence and purpose in the community. One of the priority issues that came out of one of our weekly discussions was the matter of the poor management of garbage, not only the collection of it but also how the residents disposed of garbage,” she explained.

Johnson Boyd said that the weekly meetings, which commenced in August of this year, aimed at finding solutions to ongoing problems, which are documented in a priority plan for the community. In fact, out of these discussions, it was determined by the community that there were five priorities, among them poor parenting at number one, school retention and crime and violence.

On hand at the handing over was VPA’s chair, Dr Elizabeth Ward, who stated that cleaning up the community was important for building peace in the community while noting that the bins would be branded “Climate Action for Peace”.

“We also have partnerships with not only Island Dairies Limited but also with Jamaica Public Service Company, Metropolitan Parks and Markets, who are key in collecting and clearing the garbage from the community, surrounding churches, schools and community members in the area,” she disclosed. Other partners include the police.

Residents, who were instrumental in the process expressed deep satisfaction with the initiative.   For Sanjean Roberts, a long-time resident of Cassava Piece, and a staunch member of SDC weekly hosted a community meeting, the garbage bins were deeply appreciated. Keeping the community clean as well as the gully, which runs through it, garbage-free, she said, was a necessity.

“The garbage pile- up in the gully cannot work.  It not only looks disgusting and distasteful but it is causing our mosquito problems,” she lamented.

“We are looking forward to more drums. The persons in the community love what is going on and are really excited. We are going also have our parenting forums which are set to start in October,” she divulged.

Beverley Edwards Saddler, principal of the Lalyce Gray Basic School, which is located in the community, was equally pleased with the turn of events. Saddler, who is not a resident of the community but sits on of the SDC related Community Development Committee said that her school had a role in the initiative.

“We are teaching the students how to dispose of garbage properly. We are also teaching them to separate the garbage, so we store the bottles at the school differently from the papers at school,” she said.

VPA urges schools to register for Trees for Peace Competition