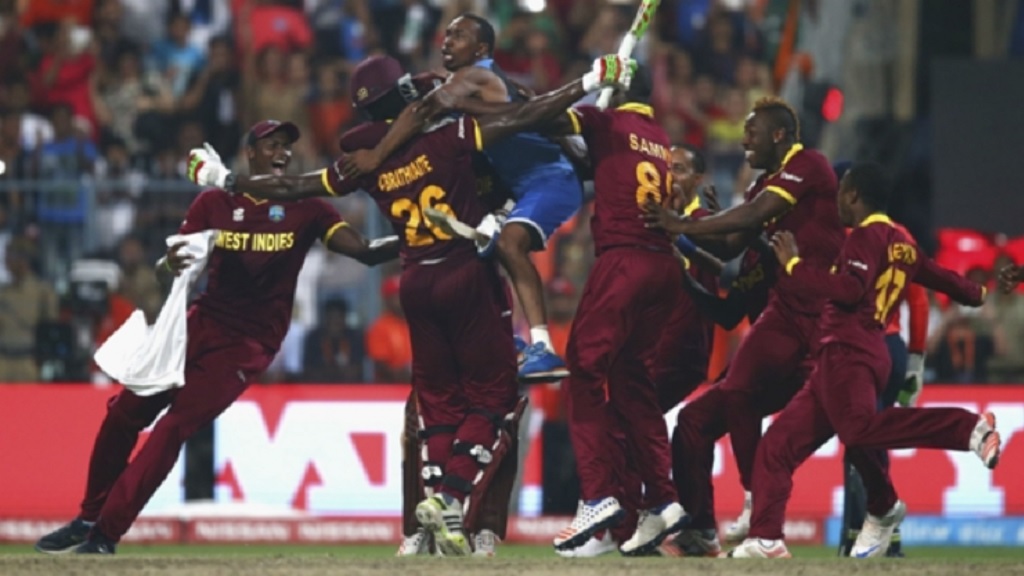 Carlos Brathwaite is mobbed by team-mates after his heroics sunk England.

It is April 3, 2016. Carlos Brathwaite is on strike and there is one over to go in the ICC World Twenty20 final in Calcutta.

West Indies require 19 runs to win a see-saw final that has ebbed and flowed like the nearby Hooghly River. Having recovered from a shocking start, England have a first limited-overs international trophy seemingly within touching distance.

They battled back from 23-3 to post 155-9. Having top-scored with 54, Joe Root claimed two of three early wicket to fall in West Indies' reply with his occasional off-spin.

Marlon Samuels and Dwayne Bravo put on a 73 for the fourth wicket, yet when Andre Russell and Darren Sammy both fell to David Willey in the space of three deliveries, England were the team in charge.

After Chris Jordan managed to deny the well-set Samuels from claiming the strike at the end of the penultimate over, Ben Stokes was tasked with seeing the job through.

His previous two overs in the game had gone for eight and nine runs respectively – combine those two together and it would still be enough for Eoin Morgan’s side to be crowned champions.

Brathwaite, however, has other ideas…

BALL ONE: WHAT A START!

When you need so many off so few, an early maximum quickly heaps the pressure back on the bowler.

Stokes appears to aim for a yorker but only serves up a half-volley instead, one he's shoved down leg so far that Brathwaite simply has to help the ball on its way, depositing it over the boundary at backward square leg with a flick of the wrists.

A gift. An absolute gift. Stokes should have sent it down with a bow on. West Indies now need just 13 from five.

Straighter – but still in the slot from Stokes. Brathwaite manoeuvres his front foot out of the way to clear space for the bat to come through and send this one much straighter down the ground – and several metres back into a now delirious crowd inside Eden Gardens.

Stokes pulls a face in response to suggest he either feels he was not too far off target or he's just eaten something that's way too hot. Either way, he's hurting. The once-taxing equation is now down to a seriously manageable sum of seven from off four.

Can England somehow claw this back?

No. Braithwaite does it again as the noise levels inside the ground rise even higher.

It's a similar stroke to the last maximum, only this time the right-hander manages to send his home run over long off. There is a brief moment after it departs the bat that you wonder if it is going to clear the fielder, like a golfer who initially fears he's taken the wrong club and could end up in the water. In the end, though, the man in the deep just watches it sail over him.

West Indies require just one to win and the rest of the squad are now off their feet out of the dugout and ready to start celebrating.

Forget knocking it into a gap to pinch a single. Brathwaite winds up again as he gets another ball on his pads, allowing him to finish the job in style.

As it sails into the sky to such an extent towards mid-wicket that air traffic control may need to get involved to help find a landing spot, the hero of the over stretches out his arms as team-mates rush out to the middle. What initially seemed a seriously tough challenge completed with room to spare.

"Carlos Brathwaite ​– remember the name!" Ian Bishop booms on commentary. Few who have witnessed it – whether live at the ground or on television – will forget it, least of all poor Stokes.

West Indies complete one of the most stunning heists in limited-overs cricket to be crowned T20 champions for a second time.