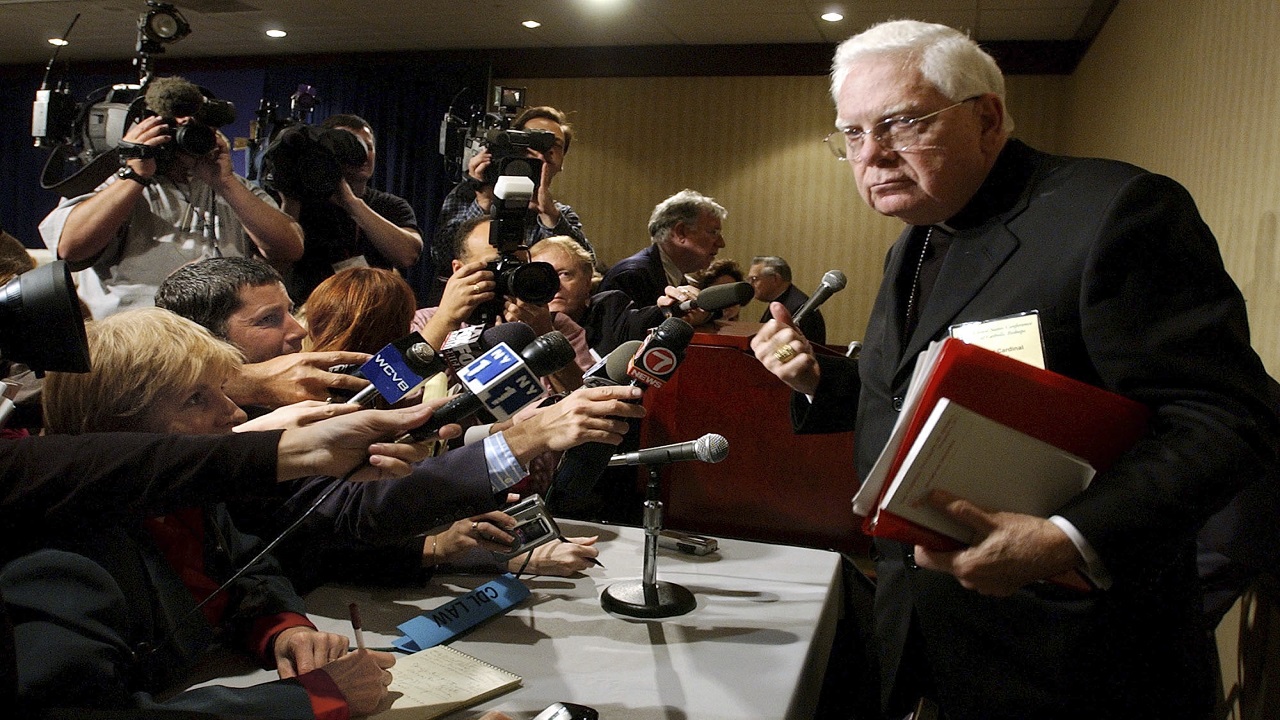 In this Tuesday, Nov. 12, 2002 file photo, Cardinal Bernard Law, right, departs a news conference during the second day of the U.S. Conference of Catholic Bishops annual meeting in Washington.

Cardinal Bernard Law, the disgraced former archbishop of Boston whose failures to stop child molesters in the priesthood sparked what would become the worst crisis in American Catholicism, died early Wednesday, the Vatican said. He was 86.

Law had been sick and was recently hospitalized in Rome.

Law was once one of the most important leaders in the U.S. church. He broadly influenced Vatican appointments to American dioceses, helped set priorities for the nation's bishops and was favored by Pope John Paul II.

But in January 2002, The Boston Globe began a series of reports that used church records to reveal that Law had transferred abusive clergy among parish assignments for years without alerting parents or police. Within months, Catholics around the country demanded to know whether their bishops had done the same, a scandal that was recounted in detail by the Oscar-winning film "Spotlight."

Law's successor as archbishop, Cardinal Sean O'Malley, said Wednesday it was a "sad reality" that Law's legacy will forever be tied to the abuse scandal since he led the Boston archdiocese at a time "when the church seriously failed" in its job to care for its flock and protect children.

"I offer my sincere apologies for the harm they suffered, my continued prayers and my promise that the archdiocese will support them in their effort to achieve healing," O'Malley said in a statement.

Law tried to manage the mushrooming scandal in his own archdiocese by first refusing to comment, then apologizing and promising reform. But thousands more church records were released describing new cases of how Law and others expressed more care for accused priests than for victims.

Amid a groundswell against the cardinal, including rare public rebukes from some of his own priests, Law asked to resign and the pope said yes.

"It is my fervent prayer that this action may help the archdiocese of Boston to experience the healing, reconciliation and unity which are so desperately needed," Law said when he stepped down as head of the Boston archdiocese in December 2002. "To all those who have suffered from my shortcomings and mistakes, I both apologize and from them beg forgiveness."

It was a stunning fall from grace for Law and a rare step for the church, which deeply resists public pressure but could no longer hold out given the scope of the crisis. Since 1950, more than 6,500, or about 6 percent of U.S. priests, have been accused of molesting children, and the American church has paid more than $3 billion in settlements to victims, according to studies commissioned by the U.S. bishops and media reports. As the leader of the archdiocese at the epicenter of the scandal, Law remained throughout his life, and now in death, a symbol of the church's widespread failures to protect children.

Still, Law retained some support in the Vatican. In 2004, he was appointed archpriest of the Basilica of St. Mary Major, one of four principal basilicas in Rome. When John Paul died the next year, Law was among bishops who presided at a memorial Mass for the pontiff in St. Peter's Basilica. Law also continued for several years to serve in Vatican dicasteries, or policy-making committees, including the Congregation for Bishops, which recommends appointments to the pope. Advocates for victims saw the posts as a tone-deaf sign of favor for Law by church officials unrepentant about abused children.

"Cardinal Law's soft landing in Rome, after his Boston disgrace, reminds us that prelate privilege remains the rule in Catholicism," said Terence McKiernan, of BishopAccountability.org, an online database of the global church sex abuse scandal and the bishops who enabled it.

And even today, 15 years after the scandal broke in Boston, the question of holding bishops accountable for their failures to protect children remains a pressing issue for the church. Pope Francis had promised to go after these negligent bishops, but he backed off a proposed Vatican tribunal to prosecute them and opted instead to use existing measures, leading survivors to question his commitment to the task.

Mitchell Garabedian, a Boston attorney who has represented dozens of people who say they were sexually abused by priests, said Law's death has reopened old wounds.

"Many victims are reminded of the pain of being sexually abused upon hearing of Cardinal Law passing away," Garabedian said. "Cardinal Law turned his back on innocent children and allowed them to be sexually abused and then received a promotion in Rome."

Alexa MacPherson, who says she was a victim of clergy sex abuse for six years as a small child, had no words of sorrow at the news of Law's death.

"Good riddance to bad rubbish. I hope the gates of hell are swinging wide to allow him entrance," she told The Associated Press.

MacPherson's mother Barbara Sidorowicz, whose two sons were also abused, also was not mourning him.

"I'm a person, I cannot ever turn my back on my faith, but I can't find it in my heart to forgive," she said. "I cry over what happened to my children, but I can't cry over him. I can't even get myself to say a prayer for him. He should have been in jail."

Francis, who met with Law briefly the day after he was elected pope when he went to pray at St. Mary Major, made no comment about Law's passing during his weekly general audience Wednesday.

In a letter of condolences later, he made no mention of Law's tenure in Boston and referred only to his position as the retired archpriest of St. Mary Major.

"I raise prayers for the repose of his soul, that the Lord, God who is rich in mercy, may welcome him in His eternal peace, and I send my apostolic blessing to those who share in mourning the passing of the cardinal," Francis wrote.

Francis is due to preside over the funeral rites at a Mass celebrated Thursday at 3:30 p.m. (1430GMT) in St. Peter's Basilica, an honor accorded to all Rome-based cardinals. The dean of the College of Cardinals, Cardinal Angelo Sodano, will be the lead celebrant.

SNAP, the main U.S. advocacy group for survivors of abuse, urged Francis to keep survivors in mind during the funeral, saying Law didn't deserve the pomp and circumstance he enjoyed in life and shouldn't have it in death.

"This celebratory focus on abuse enablers like Law must end," said SNAP's Joelle Casteix. "It is time for the Vatican to refocus on change: protecting children and those who have been hurt."

Law had been expected to leave a far different mark on the church.

Born Nov. 4, 1931, in Torreon, Mexico, Law was the only child of a U.S. Air Force colonel and a mother who was a Presbyterian convert to Catholicism. He was educated throughout North and South America and the Virgin Islands before graduating in 1953 from Harvard University. He was ordained in 1961 and campaigned for civil rights in Mississippi, sometimes traveling in the trunks of cars for safety. After a post with the national bishops' conference, he was named bishop of the Diocese of Springfield-Cape Girardeau in Missouri, then archbishop of Boston in 1984, a prominent appointment to the country's fourth-largest diocese.

Law was a prominent voice in Massachusetts and beyond, especially on abortion. He publicly challenged public officials such as Gov. William Weld and Lt. Gov. Paul Cellucci over their support for abortion rights. The cardinal was among a chorus of bishops sharply critical of Geraldine Ferraro, the 1984 Democratic nominee for vice president and a Catholic over her support for abortion rights. Under President George W. Bush, Law was a regular visitor to the White House.

Within the church, he was devoted to building Catholic-Jewish relations, including leading a delegation of Jewish and other Massachusetts leaders in a 1986 visit to the Auschwitz death camp in Poland. He worked closely with church leaders in Latin America, acting as an unofficial envoy of the pope to Cuba and revolutionary leader Fidel Castro.

However, Law's legacy has been overshadowed by the scandal.

In the notorious case that started the 2002 crisis, as recounted in the move "Spotlight," the Globe reported that Law and two of his predecessors as Boston archbishop had transferred former priest John Geoghan among parish assignments despite knowing he molested children.

More than 130 people eventually came forward to say Geoghan abused them. The archdiocese paid $10 million in settlements with 86 of his victims and their relatives as Law was clinging to his job. It was nowhere near enough to ease the growing anger.

As he announced he would leave, Law asked Boston Catholics, "Please keep me in your prayers."