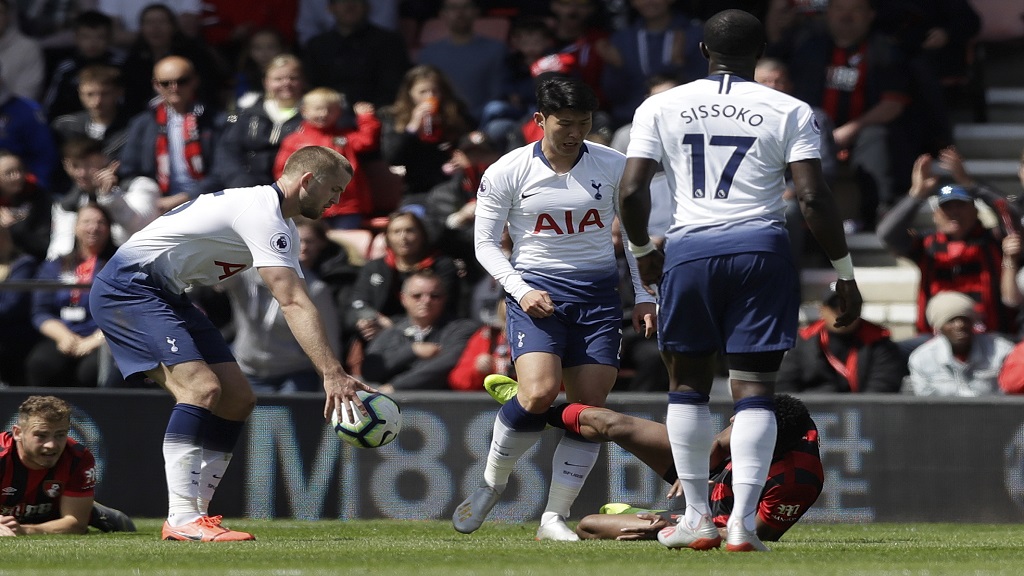 Tottenham's Son Heung-Min, centre, scuffles with Bournemouth's Jefferson Lerma, on the ground, during the English Premier League football match at the Vitality Stadium in Bournemouth, England, Saturday May 4, 2019. Son was shown a red card by Referee Craig Pawson.

There'll be no last-day battle for survival in the English Premier League, with Cardiff becoming the third and final team to be relegated on Saturday.

What looks to be going to the wire, however, is the race for Champions League qualification.

Tottenham had two men sent off, including Son Heung-min for shoving an opponent to the ground and conceded an injury-time goal in losing at Bournemouth 1-0.

The defeat kept Spurs in third place and gave their three top-four rivals — Chelsea, Arsenal, and Manchester United — renewed hope of catching Mauricio Pochettino's team. Five points separate the four teams, with Tottenham the only one of them to have just one game left.

It's all over for Cardiff, though.

A 3-2 home loss against Crystal Palace consigned the Welsh team to relegation after just a season back in the top flight and meant fourth-to-last Brighton — the only other side threatened with the drop heading into the final two games of the season — can celebrate another year in the Premier League.

Fulham and Huddersfield have already been demoted.

Liverpool can ensure the title race with Manchester City goes to the last weekend by beating Newcastle in a rare Saturday night game in the Premier League. Liverpool are one point behind City with two games left for each team. City host Leicester on Monday.

In Saturday's other games, Wolverhampton Wanderers beat Fulham 1-0 to virtually seal a seventh-place finish, which could earn a berth in next season's Europa League, and West Ham eased past Southampton 3-0.

Liverpool don't have time to think about Barcelona now - Klopp

Liverpool fans petition to get Messi banned for 'punching' Fabinho