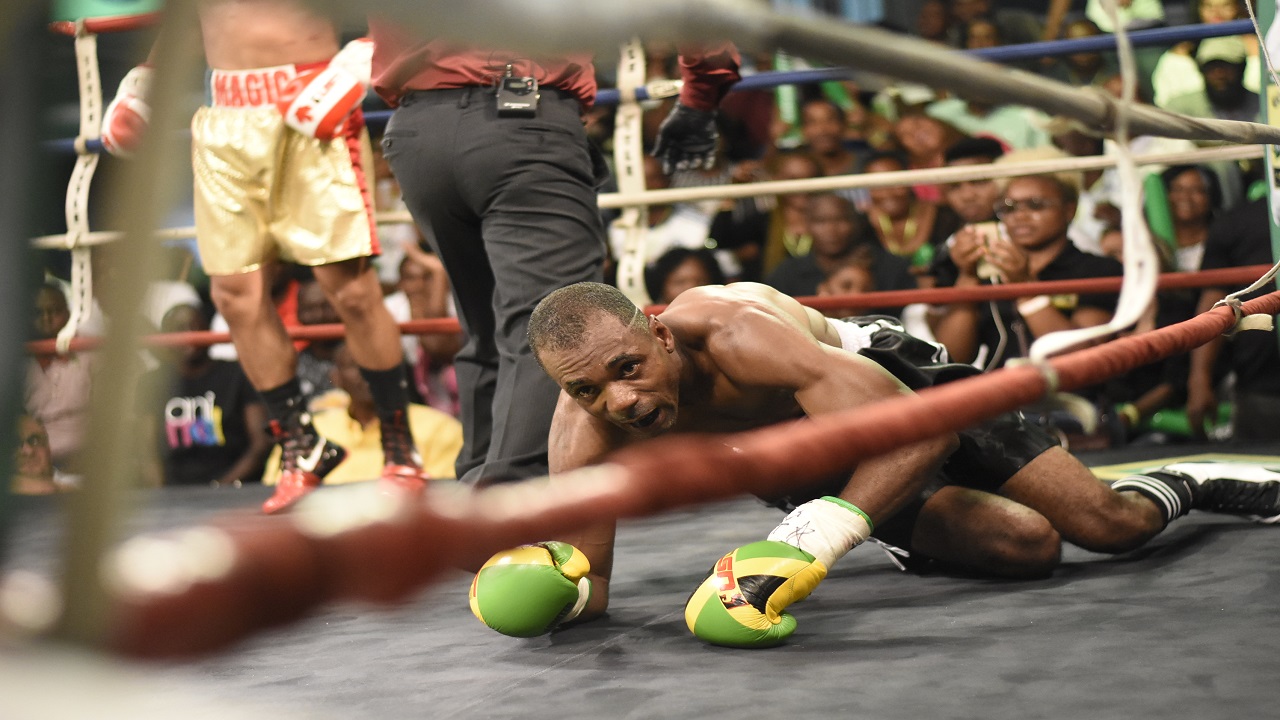 Jamaican debutant Sean-Antonie Johnson falls to the turf in the first round of his Wray & Nephew Contender Series welterweight bout against Canada's Ricardo Salas, at the Chinese Benevolent Association on Wednesday night, (PHOTO: Marlon Reid).

Season 8 of the Wray & Nephew Contender welterweight series hit high gear on Wednesday night as Canada cut Jamaica's lead to 4-3 going into the final bout in the preliminary round.

The 21-year-old Salas stamped his authority against Johnson from the opening round of the five-round bout by knocking the Jamaican to the canvas twice.

The Jamaican received a battering in the fourth round until referee Eion Jardine intervened and called the contest off. The end came 50 seconds into the round.

With the victory, Salas moved into the quarter-finals. His record has improved to eight wins with seven knockouts and a defeat.

The Canadian other victory in the series came on April 18 when Waseem ‘The Surgeon’ El Sinawi scored a technical knockout victory over Ramel ‘Sub Zero’ Lewis.

That first victory came in the third week of the series after Richard Holmes and Nico Yeyo had put Jamaica 2-0 up in the eight-fight preliminary series. Devon Moncrieffe and Michael  Gardener won the other fights for Team Jamaica.

Holmes scored a unanimous decision victory over Lloyd Reyes in the opening bout on April 4 , Yeyo upset Canada’s number one seed Mayron Zeferino in a sensational 21-second bout on April 11, Moncrieffe scored a fourth-round technical knockout victory over Tyler Wilson on April 25 and Gardener, the big favourite to win the series,  scored an emphatic first-round technical knockout win over Jay Kelly on May 2.

The final bout in the preliminary round takes place next Wednesday with Jamaica's Fabian Tucker taking on Canada's Jeff Tabrizi.