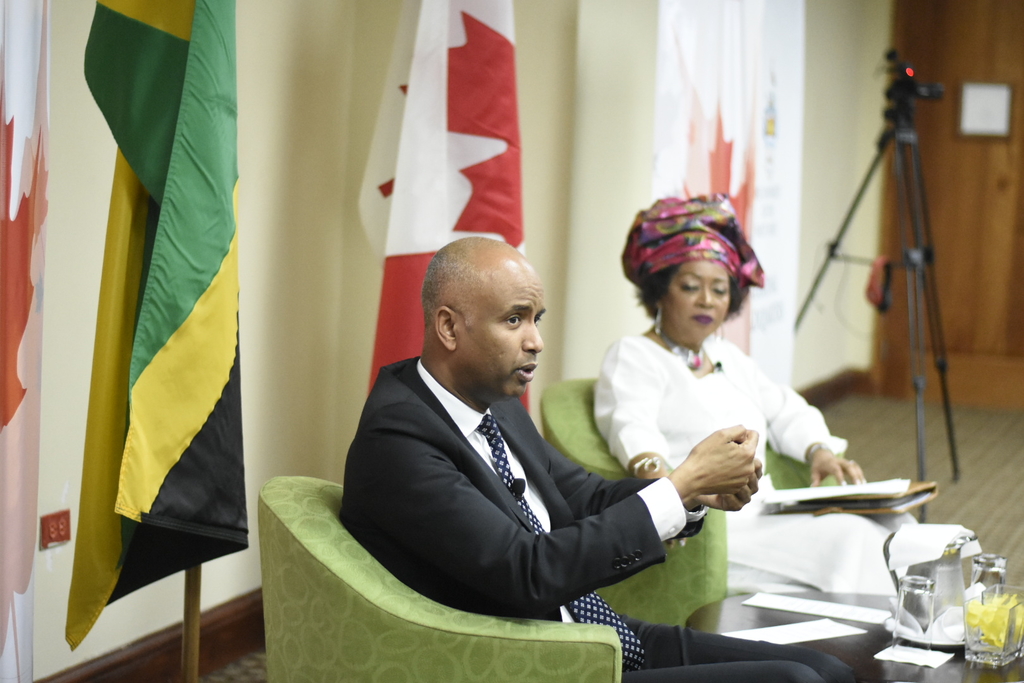 Canada’s Minister of Immigration, Refugee and Citizenship, Ahmed Hussen speaking at a forum organised by the Canadian High Commission to Jamaica and The University of the West Indies. Also pictured is Professor Professor Verene Shepherd. (Photo: Marlon Reid)

Canada is seeking to engage more Jamaicans to work in non-traditional areas, which will add to the current seasonal agricultural workers arrangement [farm work programme] that the island shares with the North American country.

The world power is keen on welcoming workers in fields such as research, education and home care, according to Canada’s Minister of Immigration, Refugee and Citizenship, Ahmed Hussen.

Hussen, however, made it clear, that despite the need for labour in those areas, Canada isn’t looking to perpetuate Jamaica’s brain drain, but rather, seeks to arrive at a mutually beneficial arrangement for both countries.

“At least from Canada’s perspective the need is there, but at the same time, we are a government that is sensitive to the issues around brain drain, so we don’t want Canada’s gain to be Jamaica’s loss. We want it to be a win-win,” Hussen said.

Therefore, both countries would have to look at fields that have a surplus of skilled workers in Jamaica, and sectors in Canada that require additional workers with certain requisite skills and expertise.

Hussen was speaking at a forum on immigration and refugees issues at the University of the West Indies Regional Headquarters in Mona on Monday. The discussion was organised by the Canadian High Commission in Jamaica and The UWI.

“It is a delicate balance and it would need for us to engage a little bit more with the Jamaican government to determine which sectors or which skill sets are available for that circle of migration,” Hussen said.

He further revealed that persons could work under the programme without a permit.

He said: “It doesn’t have to be a zero-sum game, for example, if there is a research expert in Jamaica, who is researching on robotics, for example, we have the global skill strategy, which will enable that researcher to come to Canada and work by themselves or collaborate in our research ecosystem for up 120 days without a work permit."

“That researcher may not have an ecosystem in Jamaica that is as developed as the one in Canada and so they coming to Canada and building up their skills set to the next level and then coming back to Jamaica, is a benefit for Jamaica and Canada,” Hussen said.

Hussen said Canada’s ageing population has resulted in the country encouraging workers from other countries to emigrate there.

Jamaica already has an advantage because of the Seasonal Agriculture Workers’ Programme (SAWP) also called farm work programme in Canada.

According to the Canadian minister, the partnership between both countries is working well, with a number of Jamaicans remitting money back home, and contributing to the island’s economy.

“How can we expand that to other categories? Other types of workers and industries come into the mix. How can we do that?

“I think in the Canadian and Jamaican example it is a no brainer because Jamaica has a similar system to Canada. [Jamaica is an] English-speaking country, [with a] young dynamic population. We should be doing this way more. It should not just be the seasonal agricultural worker programme”.