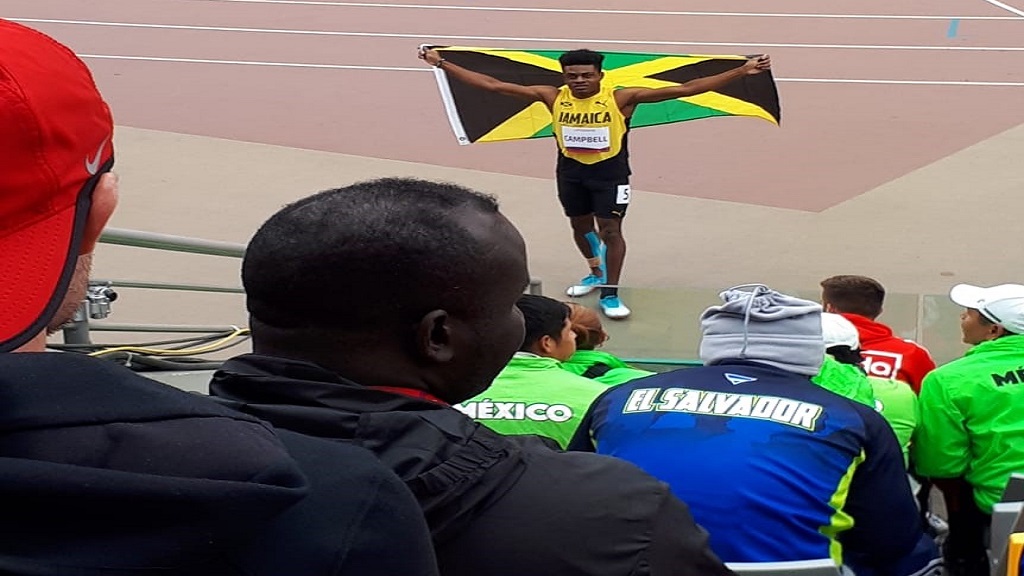 Team captain, Chadwick Campbell celebrates with the Jamaica flag following his silver medal in the T13 100m at the 2019 Parapan American Games in Lima, Peru on Monday, August 26, 2019.

Team captain, Chadwick Campbell, got into the blocks at the starting line at approximately 3:43 p.m. on Monday for the final of the 2019 Parapan American Games T13 100m, a location with which he is familiar at international games, having been there at the 2017 London World Para Athletics Championships.

The line-up was not what he wanted in Lima, Peru as there was not a full field, owing primarily to ineligibility arising from non-classification of athletes. However, Campbell remained focused in his first Parapan American Games experience and it proved inspirational as he crossed the finish line as the silver medallist in 11.66 seconds.

The gold medal went to Brazilian Arnaldo DaSilva and the bronze to Honduran Elgin Castellanos.

Commenting after the race, the Jamaica team captain demonstrated leadership.

"You win some and you are humble in victory, and you lose some but you are never defeated. You win a medal and celebrate and you come out without a medal, but you are still a winner. This is what the Paralympic spirit teaches you - humility and never say die. I am celebrating," he said.

The Fitz Coleman protégé goes back into the athletic studio, where he hopes to record a "blockbuster" for the Dubai World Para Athletics Championships later this year in November.

"Rarely do you find an athlete so composed and very grounded  in handling success as part of life's experiences and in building character. Chad has it down pat," said Samuda.

On Sunday, Santana Campbell could only manage sixth in the women's F55 shot put despite establishing a new national record 6.96m.

Mexican Rosa Guerrero won the gold medal with a throw of 8.11m.  Maria Mardones of Chile with 7.67m and American Sebastian Arellano Lopez with 7.63m secured the silver and bronze medals, all with personal best throws,

"It was great and I am grateful for this opportunity to represent my country. It's a feeling that you cannot possibly describe," said Campbell, who now look towards her pet event - the women’s F56 javelin - in which she is the regional record holder.

Hudson in the preliminary heats posted 51.01 after a slow start for third and had the punters' predictions for the final in a spin.

The final came in the evening and he was not able to come into the medal frame as he placed sixth in 51.17. However, two athletes who had placed ahead of Hudson were disqualified and the Jamaican was elevated to fourth position.

He now turns his attention to IPC's World Para Athletics Championships in Dubai in November, where he is the 2017 London silver medalist in the event.