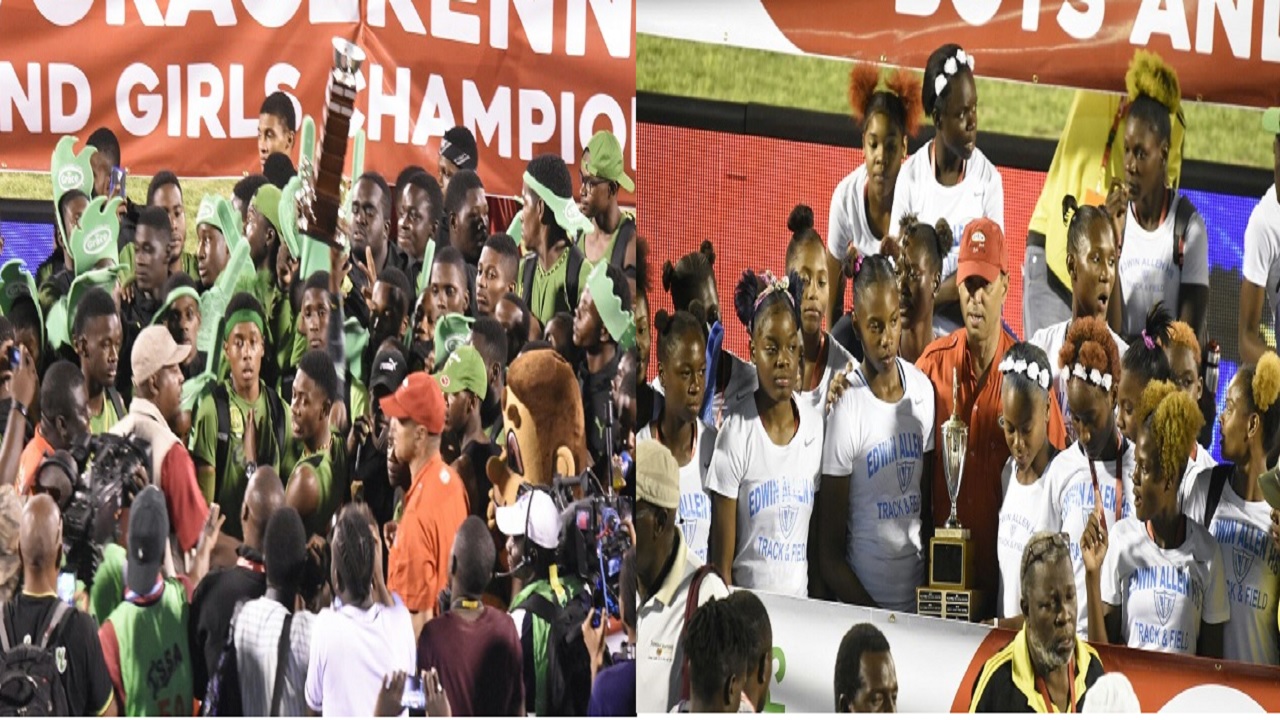 The combination of pictures show Calabar High and Edwin Allen High posing with their championship trophies after they retained their titles at the 2018 ISSA/GraceKennedy Boys and Girls' Athletics Championships at the National Stadium, on Saturday night. (PHOTO: Marlon Reid).

Calabar High and Edwin Allen High on Saturday night retained their respective titles at the 2018 ISSA/GraceKennedy Boys and Girls' Athletics Championships at the National Stadium.

Calabar, which entered the fifth and final day on 161 points, 34 ahead of KC, ended the championships with  368.50 points after the 42 finals were scored for their seventh straight title and 28th overall. They beat second-place KC by 90.50 points. KC finished with 278 points.

Edwin Allen High, which entered the final day on 148 points, 39 points ahead of Holmwood Technical, took the girls' championships with 324  points after the 46 finals were scored, 35 ahead of second-place Hydel High, for their fifth straight victory and sixth overall. 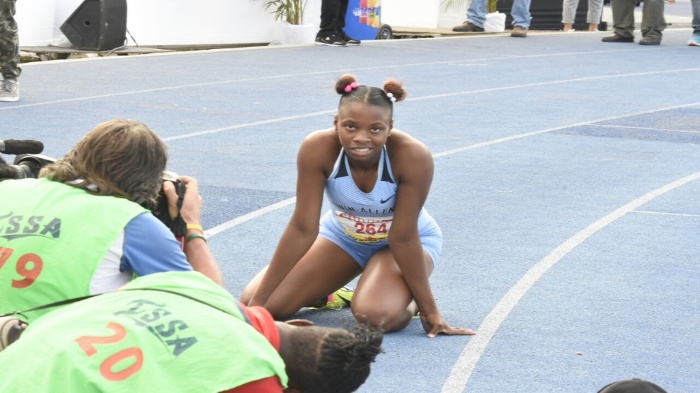 Kevona Davis of Edwin Allen cools down on the track after her record victory in the Girls' Class 2 200m final on Saturday. (PHOTOS: Marlon Reid).

The championships ended in disappointing fashion for Calabar High as they were disqualified, based on ISSA Rule 5b, after scoring an emphatic victory to break the record in the Boys' 4x400-metre relay open.  Petersfield High, which had finished second in 3:10.64, were awarded first place.

Calabar High, with Christopher Taylor on the anchor leg, had completed the victory in 3:05.60 to erase the previous record of 3:06.76 they  set in 2015. However, the record will remain following the disqualification, which was announced 45 minutes later when Calabar were still celebrating their big victory over main rival KC.

Hydel High also had their number taken down after closing the championship with victory in the Girls' 4x400-metre relay open. However, following an objection, the result was reinstated to its original position, 45 minutes later.

During that scenario, Holmwood Technical had moved from third place to second in the championship and ahead of Hydel High.

Rodgers who won the event last year very easily was stalked all the way by Venson, who stepped up to the event this year.  Both athletes were paced together entering the final lap, but when Venson kicked for home coming off the final bend, Rodgers - who was bumped around repeatedly in the race - failed to respond as the troubled trip he had taken its toll.

The victory handed Venson the 1500m-5000m double. Venson, on Friday, scored an impressive victory in the Boys' Class 2 1500 metres when leading home his teammate Rivaldo Marshall. Last season he won the 1500-metre title by beating Rodgers, who this year skipped the event for the 2000-metre steeplechase open, which the Ugandan easily won on Thursday night.

Among the highlights on the track were Kevona Davis' record run in the Girls' Class 2 200 metres final and Dejour Russell's impressive victory in the Boys' Class 1 110-metre hurdles, also in record time.

Davis, Edwin Allen standout sprinter, clocked 22.72 seconds to erase the 22.92  she achieved on Thursday in the semi-finals when breaking the 23.13, which Anneisha McLaughlin of Holmwood Technical set 16 years ago.

The time was also a new national youth record.

Davis had earlier that day clocked 11.35 seconds in the opening heat of the semi-finals to better the previous record of 11.40 set by St Jago's Kimone Shaw in 2016. 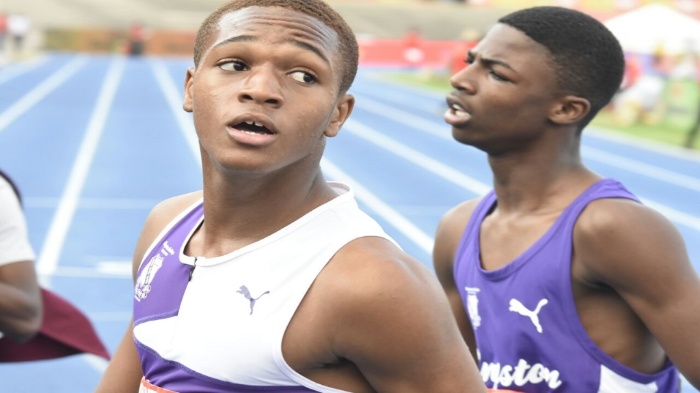 The KC pair of Adrian Kerr (left) and Nkrumie Bouwahjgie after finishing first and second in the Boys' Class 2 200m final on Saturday.

There was another record in the 200 metres as Kingston College's (KC) Adrian Kerr clocked 21.69 seconds to win the Boys' Class 2 final. Kerr beat the previous record of 21.72 seconds set by Tyreke Wilson of Calabar High in 2014.

It was a one-two finish for KC as the 100-metre winner in record time, Nkrumie Bouwahjgie finished second in 21.74 seconds.

It was a one-two finish for Calabar High as Orlando Bennett won the battle for second with 13.30 seconds. 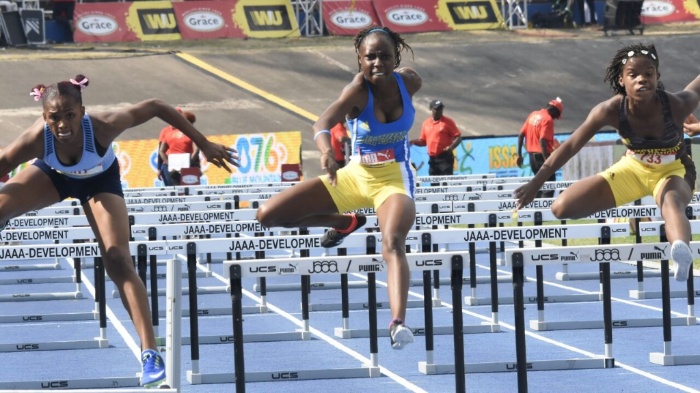 Gabrielle Matthew of Hydel High (centre) moves ahead of Janela Spencer (right) of Manchester High and Salieci Myles of Edwin Allen to win the Girls' Class 3 80m hurdles on Saturday.

The other sprint hurdles record came from St Jago's Vascianna Vashaun who clocked 13.35 seconds to beat the previous best of 13.45 set by Calabar's Michael O'Hara in 2013.

Morris did not disappoint his many supporters as he turned back the challenge of Calabar High's Anthony Carpenter and Chevannie Hanson of Edwin Allen to cross the line in 45.09 seconds.

It was the third time this season that Morris had stopped Carpenter, whom Calabar had put all their faith in after pulling Christopher Taylor from the event.

Morris had emerged as a main contender for the title after clocking 45.93 seconds  in the Corporate Area Championships on March 10, the second regional meet of the Digicel Grand Prix Series, to place a close second to Taylor (45.84) and then returned to easily beat  Carpenter at the CARIFTA Trials.

KC also secured another famous victory over Calabar High, this time in the Boys' 1600-metre sprint medley, also in a meet record time.

The quartet of Colin Rowe, Javad Black, Kevin McPherson and Kenneil Dewar completed the course in 3:24.22 seconds to erase the previous record of 3:25.78 they set in 2014.

In the field, Edwin Allen High's Fiona Richards made up for her surprising defeat on Wednesday in the Girls' Class 1 discus throw by taking the shot put title with a record throw of 14.93 metres, which erased the previous mark of 14.46 metres set by Janell Fullerton of St Jago High.

Aiko Jones of Wolmer's Girls finished second with a throw of 14.07 metres, while St Jago High's Gabrielle Bailey, who upset Richards on the Class 1 discus, finished third with an effort of 13.94 metres.

The Boys' Class 2 discus throw also produced a new meet record. Romaine Beckford of Buff Bay High won with a throw of 55.70 metres, which beat the previous mark of 53.41 achieved by Daniel Cope of Petersfield High in 2016.

KC's Ralford Mullings finish second with a throw of 54.85 metres, which also bettered the previous record.

The Hydel pair of Alana Reid and Shiann Salmon also closed out double on the day.