The combination of photos show Holmwood Technical and Edwin Allen battling for honours (at left) and Calabar's top sprinter Christopher Taylor is all alone at the finish line in the Boys' Under 20 400m final at the Digicel Grand Prix Finale at the National Stadium on March 10. (PHOTOS: Marlon Reid).

After months of preparations, the most anticipated high school track and field meet, the ISSA/GraceKennedy Boys and Girls' Athletics Championships, over five days, starts on Tuesday at 1:00 pm at the National Stadium with Calabar High and Edwin Allen highly fancied to retain their titles.

Calabar High will be searching for their seventh straight titles and 28th overall; while Edwin Allen will be hunting their fifth straight and sixth overall.

Both reigning champions have done everything asked of them so far this season and based on the 2018 Digicel Grand Prix Athletics Championships, which comprised four regional meets and a Grand Finale and the other build-up meets, Calabar High look set to tick off a commanding victory, while Edwin Allen will receive a two-pronged attack from  10-time champions Holmwood Technical and Hydel High, which are searching for their first girls’ title. 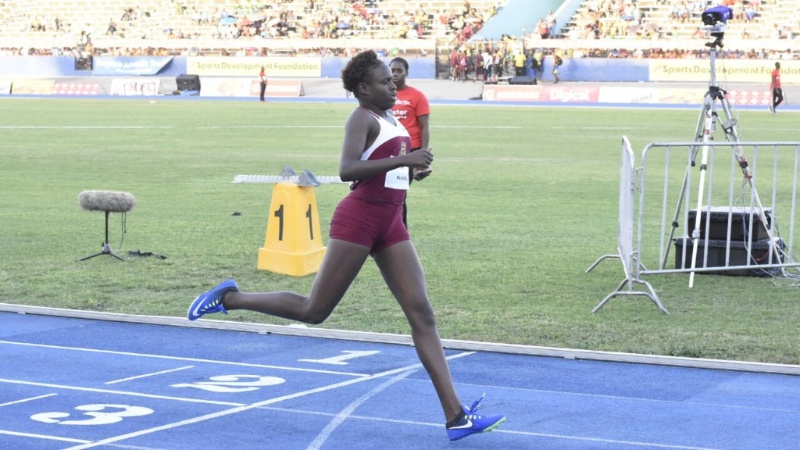 Holmwood Technical, which won the last of their 10 girls’ title in 2013, and Hydel High have both been very competitive against Edwin Allen this season, while Calabar have totally dominated action against the boys because their main rivals over the years Kingston College (KC) have been keeping a very low profile this season.

As a result of KC’s tactics this season, an interesting battle looms for the boys’ title, although the results this season are overwhelmingly in Calabar’s favour.

KC may have employed different tactics this year as a result of what transpired last season when they were expected to win by over 50 points after dominating the warm-up meets but suffered a number of mishaps and Calabar won a lucky title by three points.

The coaching staff of Calabar wasn’t expecting victory last season and leading up to the championships the school tried desperately to prevent KC’s Ugandan athlete Arymanya Rodgers from competing at the championships.

Calabar used up most of the last two weeks that season to protest a decision by the Inter-Secondary School Sports Association (ISSA) to allow Rodgers to compete.

This follows controversy that has been brewing about whether Rodgers, who was new at KC at the time, completed his transfer in time to compete.

Calabar have been competing at full strength during the build-up meets this season, but once again the school was caught up in controversy by boycotting the 42nd staging of the Gibson McCook Relays, a meet organised by the KC Old Boys.

That decision angered track and field fans who had flocked to the National Stadium to see Calabar’s record breaking 4x400-metre quartet in action. 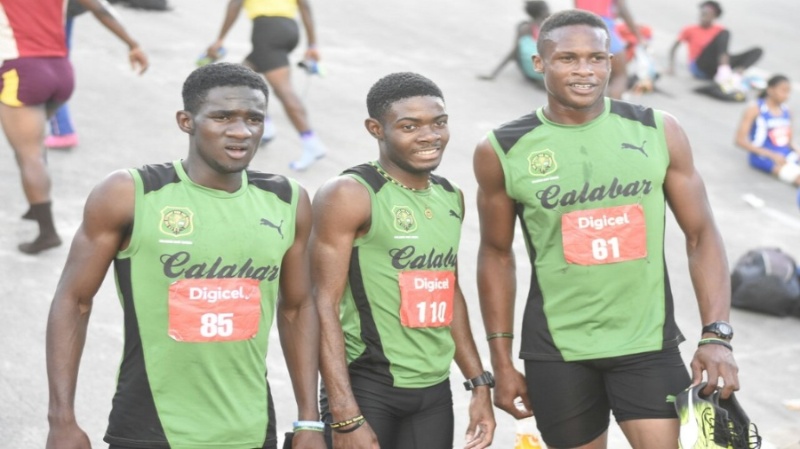 Three members of Calabar High's 4x400m relay team, which clocked the fastest ever time recorded by a Jamaican High School team at the Digicel Corporate Area Championships at the National Stadium on February 16. They are (from left) Malik James-King, Christopher Taylor and Shemar Chambers. Missing is Anthony Carpenter.

However, all eyes will again be on Calabar’s 4x400-metre relay team, which is expected to break the meet record of 3:06.76 it set in 2015, after the team clocked the fastest ever time recorded by a Jamaican High School team at the Corporate Area Championships, the second regional meet of the Digicel Grand Prix Series on February 16.

The quartet of Anthony Carpenter, Christopher Taylor, Shemar Chambers and Malik James-King clocked an eye-popping 3:05.04 seconds to erase  the previous best of 3:06.56 seconds set 21 years ago.

Calabar’s 4x400-metre team also has the second fastest time recorded by a Jamaican High School team this year after clocking a 3:06.37 at the Digicel Grand Prix Finale – G C Foster Classics – on March 10 at the National Stadium.

KC also have a strong 4x400-metre team as the quartet of Nathaniel Bann, Tyreke Bryan, Shanthamoi Brown and Chemar Marshall clocked 3:09.9 seconds to outclass the field at the Gibson McCook Relays.

Another interesting event will be the Class 1 Boys’ 400 metres where Christopher Taylor of Calabar High is the big favourite.

However, KC’s Deshawn Morris also has a big shot at the title after clocking 45.93 seconds  in the Corporate Area Championships on March 10, the second regional meet of the Digicel Grand Prix Series, to place a close second to Taylor (45.84) and then returned to easily beat Calabar's other main quarter-miler Anthony Carpenter at the CARIFTA Trials.

That clash was expected last season but did not materialise  after Mattherson suffered a devastating hamstring injury in the 100m semi-finals, one of the mishaps, which denied KC of the title.

Mattherson has sparingly compete this season but once in top shape will not be beaten.

Calabar are expected to score heavily in the sprint relays after sweeping the three titles at the Digicel Corporate Area Championships and in the process relegated KC to second place each time.

The Michael Clarke-coached Calabar have a star-studded squad and other athletes which the school will be depending on to score heavily are  Michael Stephens in the Class 1 100m,  De'Jour Russell in the Class 1 110m hurdles, Evaldo Whitehorne in the Class 2 400m, Kai Chang in the Class 1 discus throw and Rivaldo Mitchell and Kevroy Venson in the middle distance races. 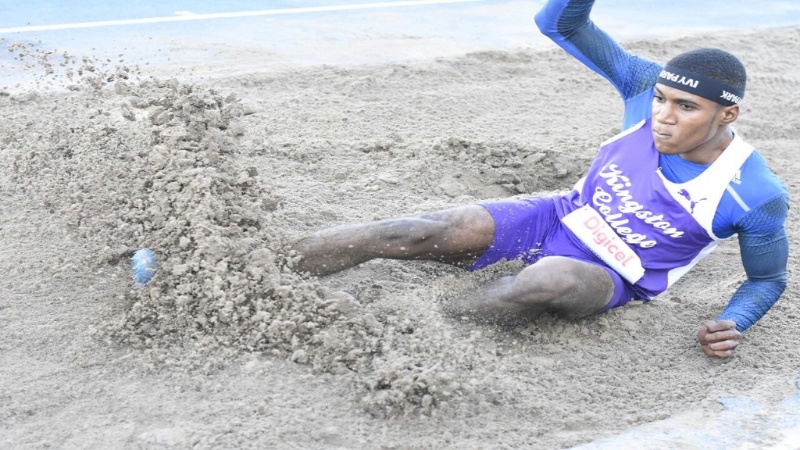 Kingston College's Wayne Pinnock competes in the Boys' Under 20 long  jump final at the Digicel Grand Prix Finale - G C Foster Classic - at the National Stadium on March 10. Pinnock won the event in a new championship record of 7.99m, which is better than the 7.87m Champs' record set in 1993 by Vere Technical's Leon Gordon.

KC will be relying of top athletes such as  Mattherson in the Class 1 100m and 200m;  Shanthamoi Brown in the Class 2 400-metre hurdles; Christopher Seaton and Anthony Willis in the Class 3 high jump; the impressive Wayne Pinnock and Shacquille Lowe in the Class 1 long jump and Arymanya Rodgers in the 5000m.

At the Western Championships, Watson got the better of Dennis. Both athletes were credited with the same time - a record 21.24 seconds, which erased the previous best of 21.50 done by Darrion Bent of Mannings in 2006.

Holmwood Technical should also scored heavily through Chrissani May in the Class 1 middle distance races, Rickiann Russell in Class 2.