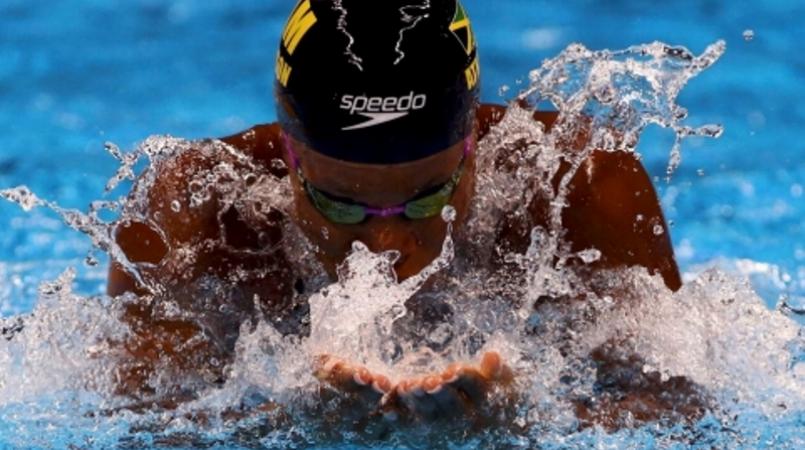 Alia Atkinson has a lot to smile about at this Central American and Caribbean (CAC) Games in Barranquilla, Colombia.. The reigning RJR/Gleaner Sportswoman of the Year is none other than captain of Jamaica women’s team at this, the 23rd renewal of the regional sporting extravaganza.

“It’s pretty remarkable. I think this is the first time I’ve ever been captain of a team. It’s been a while since a group of swimmers are at one competition. … for a while it’s been myself and the same thing for Yona, it’s been himself as well, so it’s the first time we’ve actually had a whole collective of aquatics swimmers and water polo should be joining us as well,” observed Atkinson at the Athletes’ Village, as she readied herself to plunge into competition.

“So to be captain of the swimmers and but in addition to that, co-captain of the whole CAC delegation, is truly remarkable because it shows my maturity in the sports; there’s a lot of experiences and knowIedge that I can share. It’s great to see other people in the delegation knowing that and wanting to harness that and use it for the youth,” she added.

The captain and her swim-mates appear buoyed by each other’s presence and she noted it has provided more energy to bounce around.

“It’s pretty cool. Usually I’m very high spirited, I’m very positive and when I’m by myself it’s wasted, you can only pump up yourself so much. So when I have somebody else to feed off, and to energise, when I see somebody else in need or being pessimistic or down it’s a lot easier for me to jump into gear and get them ready and get them energised to go and in doing so it energises me as well,” admitted Atkinson.

As a matter of fact, so good is the vibe that she is not weighed down by the pressure of expectation.

“Not really,” she responded to a query about feeling pressure. “I think the spectacular part of the CAC Games is that it’s not only the Caribbean, but the Central Americans as well, so you get that interaction of having a Caribbean feel, but with our Hispanic neighbours and because of that it’s a lot of family, it’s still very Caribbean-like, it’s still very nostalgic and I like that feeling.”

Speaking to the surroundings in the Athletes’ Village, she added: “They have dancing every day, every night so it’s that same type of fun environment that makes a Caribbean meet so special and it’s surrounding us right now. So it’s kind of hard to be nervous when you’re having so much fun.”