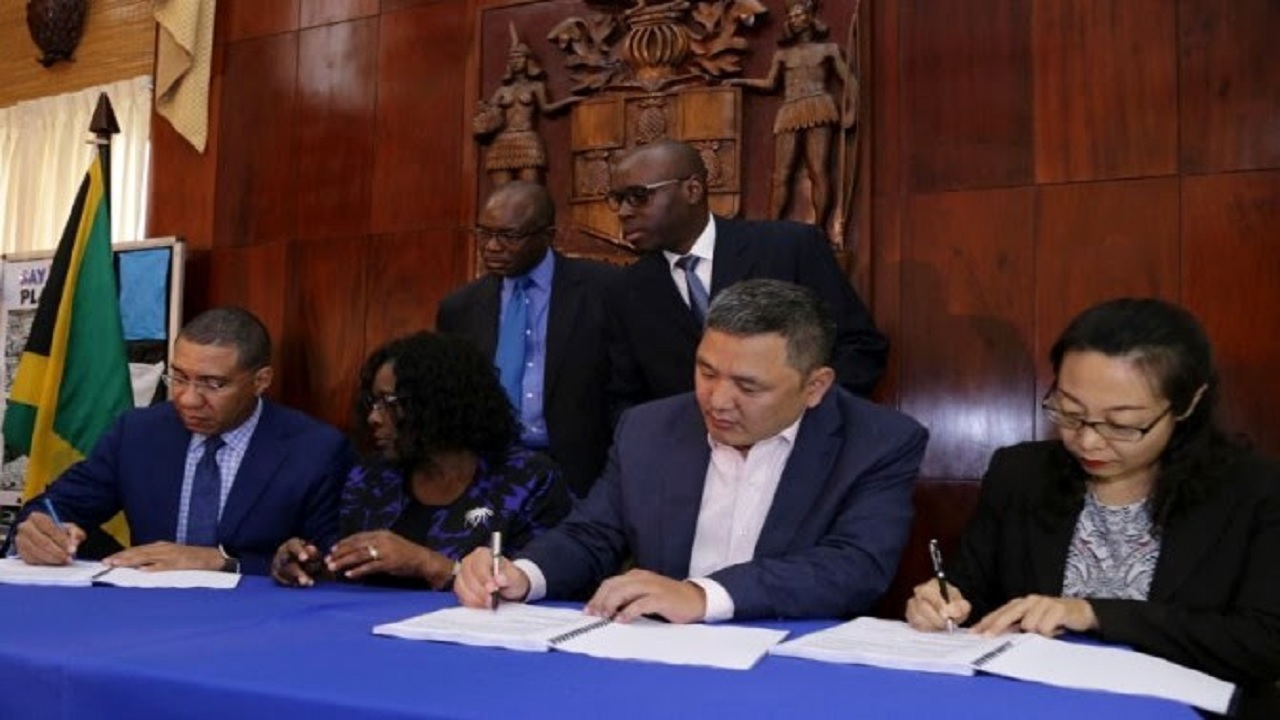 Prime Minister Andrew Holness signs a contract agreement with China Harbour Engineering Company (CHEC) for the construction of a new road to bypass the Three Miles area valued at US$1 million. (PHOTO: OPM)

A new road is being built in Kingston to alleviate traffic congestion on Spanish Town Road in the vicinity of the Three Miles area, Prime Minister Andrew Holness announced Monday.

Holness, at a media briefing held at Jamaica House, said the road was slated to come on stream at a later date, but he said the project was now necessary given the construction and roadwork underway in the Three Miles Area which has caused congestion.

“The construction of this road will create a dedicated access route to Marcus Garvey Drive for traffic coming from the Mandela Highway. This road will be especially useful to members of the business sector who are involved in the movement of containers,” said Holness, explaining also that the move is a part of the Government’s plan to build out Caymanas as a multi-purpose, light industrial, commercial and residential Special Economic Zone.

During the media briefing, the Prime Minister signed the contract agreement with China Harbour Engineering Company (CHEC) for the construction of the new road valued at US$1 million.

Completion is expected within four to five weeks.

The move comes as the Government faces criticism over the planning of the major road improvement excercise, with severe bottlenecks across the Corporate Area as a number of projects are taking place simultaneously along some of the island's busiest thoroughfare.

Holness added that Government is exploring introducing a one-way system along the new route as, he said, his administration strives to ensure that it maximizes efficiencies from the investment.

“Our traffic counts show that some 80,000 vehicles use the Mandela Highway on a daily basis. Four thousand vehicles use this corridor during the morning peak with 60 per cent of these heading towards the Portia Simpson Miller Square and the remainder using Washington Boulevard,” Holness said.

He added: “We therefore expect that this 60 per cent of the vehicles will use this new road to get to Marcus Garvey Drive and on to their destination. We will therefore be in a position to save a considerable amount of travel time.”

- Drainage improvement: the installation of pipe culverts along the route including behind Red Stripe and the end of Chesterfield Drive.

- The Installation of temporary traffic signal at the Marcus Garvey Drive intersection with the new link road.

Holness appealed to the public to cooperate during the transition phase.

“I am asking for and expect the full cooperation of local residents and motorists during this period of temporary adjustment and transition towards the greater good-which in this case, is good roads,” said Prime Minister Holness.

The Prime Minister also apologised for the traffic delays being experienced by motorists.