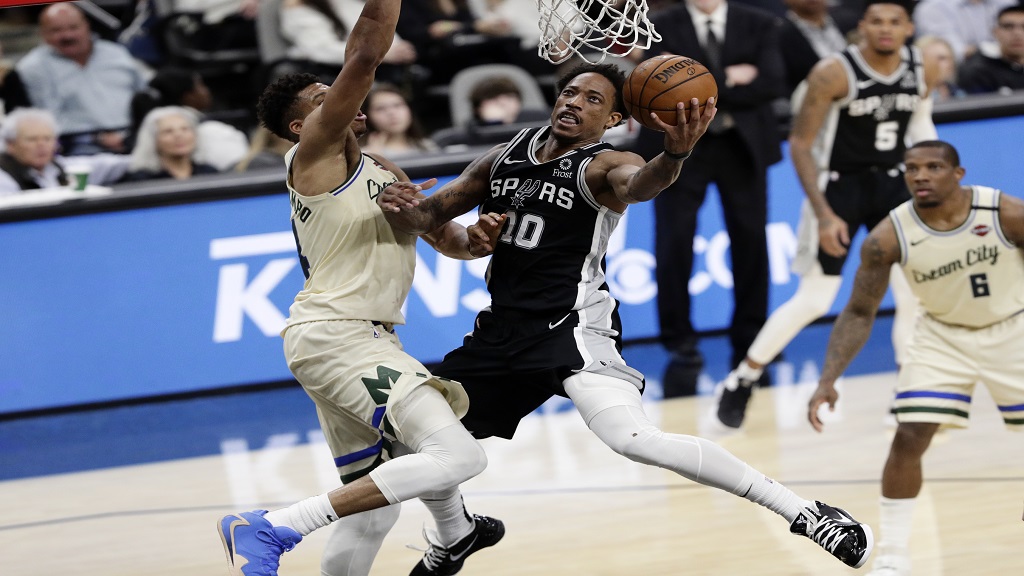 San Antonio used a season-high 19 three-pointers to upstage Milwaukee, who had their five-game winning streak snapped.

DeMar DeRozan posted 25 points for the Spurs (15-20) and team-mate Patty Mills added 21 points – including six for 10 from beyond the arc.

The high-flying Bucks (32-6) were led by reigning MVP Giannis Antetokounmpo and his 24 points, 12 rebounds and eight assists on the road.

In Philadelphia, the 76ers returned to winning ways thanks to a 120-113 victory at home to the Oklahoma City Thunder.

Luka Doncic recorded his 11th triple-double of the season as the Dallas Mavericks beat the Chicago Bulls 118-110. He scored 21 of his 38 points in the third quarter, collected 11 rebounds and tallied 10 assists.

Markelle Fultz – the number one pick in the 2017 NBA Draft by the 76ers – had a career-high 25 points to lead the Orlando Magic past the Brooklyn Nets 101-89. Team-mate Nikola Vucevic added 11 points and 24 rebounds.

Nikola Jokic was red-hot in the Denver Nuggets' 123-115 triumph at the Atlanta Hawks. He had a career-best 47 points with no turnovers.

Ish Smith put up a game-high 27 points as the Washington Wizards shocked the Boston Celtics 99-94.

Bogan Bogdanovic's 35 points led the Utah Jazz to a 128-126 victory against the New Orleans Pelicans and a sixth straight win.

Taurean Prince was two of 11 from the field and two of nine from three-point range for six points in 29 minutes. His Nets team-mate Garrett Temple did not fare much better, posting nine points on two of 13 shooting and one of eight from beyond the arc.

The Charlotte Hornets lost 115-104 to the Indiana Pacers and PJ Washington struggled. While Washington collected nine rebounds, he only made three of his 12 shots from the field, while he missed all five of his three-point attempts.

The lowly New York Knicks (10-26) make the trip to Staples Center on Tuesday. The Western Conference-leading Los Angeles Lakers (29-7) will look to extend their winning streak to six games.