From the brink of death: Cayman man revived after hearts stops beating 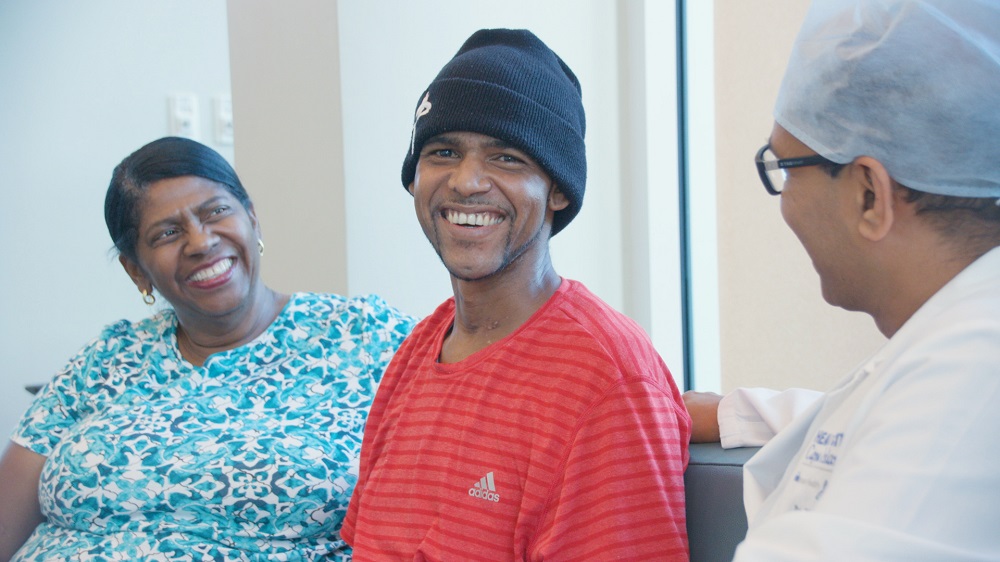 A 33-year-old Caymanian man along with his family are singing high praises for the medical team at Health City Cayman Islands, after he was successfully resuscitated after his heart stopped beating.

Relieved at having a second chance at life, Bjorn Ebanks had only high praises for his surgeon and for the Health City Cayman team.

“Dr Binoy is a good doctor. He is one of the best I would say. Most doctors would probably have given up and said ‘alright I’m gone. I’m just grateful that I am here and I can have another chance to see my family, “said  Ebanks

Ebanks went into cardiac arrest, while on route to the hospital’s facility in East End.

Resuscitation efforts got underway while Ebanks was in the ambulance and as he was being brought into Health City triage.

Though the hospital emergency staff refused to give up on resuscitation attempts, it was not until the intervention of  Dr. Binoy Chattuparambil, affectionately called Dr. Binoy, that Ebanks  showed  progress.

According to the hospital staff, Ebanks’ heart had stopped twice, with doctors performing CPR for close to 90 minutes before Ebanks it was decided that Ebanks would be placed on advanced life support.

“We went on for close to 90 minutes. He did come back two times and then we sort of lost [him] so we continued the cardiopulmonary resuscitation and Dr. Binoy walked in and he decided that we should try the ECMO,” said Dr. Dhruva Krishnan, who helped in resuscitation efforts.

Extracorporeal cardiopulmonary resuscitation (ECPR) is a method of resuscitation (CPR) that puts the patient's blood through an external device, which oxygenate the blood supply.

A portable extracorporeal membrane oxygenation (ECMO) device is used as a supplementary method to standard CPR.

While Dr. Binoy Chattuparambil suggestion saved Ebanks’ life, many, including staff at the hospital were cautiously optimistic about the procedure, due to its level of difficult.

It is such a tedious procedure that Health City Cayman estimates that fewer than 20 hospitals in the world are likely to have attempted it.

“I told them, if you are not doing it, it’s 100 percent death, if you are doing it then maybe one percent … for that patient it’s the only chance,” said Dr. Binoy as  he addressed concerns raised by his colleagues.

“With all hands on deck and team members performing heart massage to keep the patient alive during the procedure,” said Dr.Binoy, as he recounted the adrenaline-charged experience.

“You should have seen the whole team … everyone is up in there doing the massage on one side while we instituted the ECMO to the groin, which took me about 20 minutes,” he added.

“With the ECMO he was getting better, he stabilized and I shifted him to the ICU,”said Binoy.

After consultation with Ebanks’ girlfriend it was revealed that for the last two weeks Ebanks had experienced shortness of breath, which had deteriorated to the point where they had to call for an ambulance.

This quick consultation along with details about Ebanks' medical history, Dr. Binoy ordered a CT scan, which revealed that blood clots were completely blocking both lung arteries.

“There was absolutely no blood going to the lungs. So there was only one option: surgery again. From the CT scan room we took him immediately to the operating room ... this surgery took almost 10 hours,” the surgeon explained

The emergency surgery to remove the blood clots is a complicated procedure called a pulmonary endarterectomy, and involves putting the patient on a heart and lung machine.

“We had to cool the body to 20 degrees centigrade. I had to drain all the blood from the body, open both lung arteries and remove the clots from both sides,” Dr. Binoy recalled.

“But after five to six days he was perfect, there was no neurological deficit and he started walking after six days ... lung pressure returned to normal, his heart became normal. And after two weeks we sent him home,” recounted Dr. Binoy.

Dr. Binoy explained that the delicate and rare pulmonary endarterectomy procedure involves the use of very fine instruments for incisions and the removal of tiny clots from the lungs.

“The learning curve for this procedure is very long. That’s why there are only 10 to 20 hospitals where it has been done in the entire world. But the surgery is so gratifying,” he said.

The medical team was also emotional and overjoyed at Ebanks’ near miraculous recovery.

“Bjorn is extra special for us because we sort of pulled him out of nowhere…And he is a fighter, he came out of it. And I think it makes us very happy, to see people like him walk out of ICU and walk out of the hospital,” Dr Dhruva said.