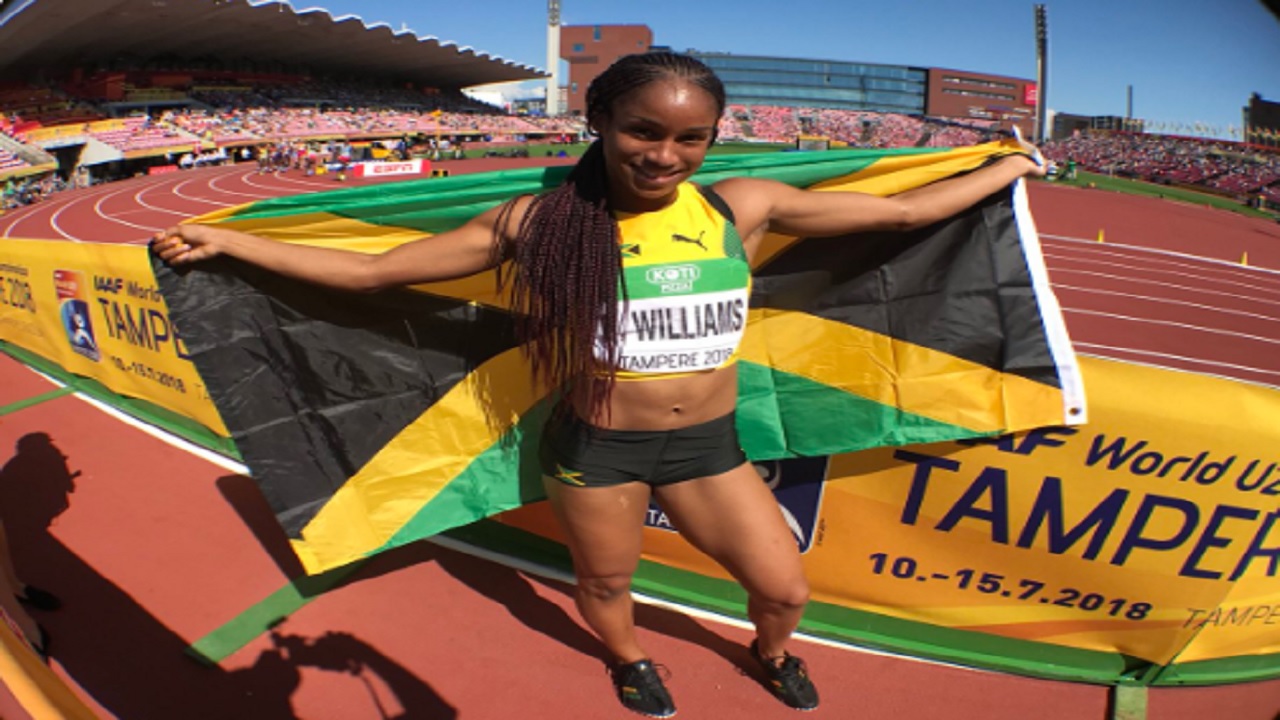 Jamaican Briana Williams celebrates after winning the gold medal in the women's 200m to take the sprint double on Saturday's fourth and penultimate day of the IAAF World Under-20 Championships in Tampere, Finland.

Jamaican Briana Williams secured the women's sprint double on Saturday's fourth and penultimate day of the IAAF World Under-20 Championships in Tampere, Finland by taking the 200 metres in a championship record time and new personal best of 22.50 seconds.

Favourite Lauren Rain Williams of the United States finished a distant second in 23.09 with Poland’s Martyna Kotwila taking bronze in  23.21, a national U20 record for Poland, over authorised neutral athlete Polina Miller, who clocked 23.32.

Just three months and few days past her 16th birthday, Williams arrived in Tampere as the youngest entrant, but will likely leave as its most memorable star as her blistering 22.50 planted her at the No. 11 spot on the all-time U20 200m list.

Lauren Rain Williams led at the bend seemingly positioned to finally take a gold medal that has so far eluded the USA at these championships. Again, the USA, by far the winningest nation in the history of the World U20 Championships, would be denied.

The Jamaican had a narrow but clear lead off the turn, and stretched it with each passing stride, coming home than half a second ahead of her US rival. The winning margin was 0.59, the second biggest ever.

"I was a bit tired and nervous before the race," said Williams, who arrived in Tampere with a 23.11 lifetime best, set when winning her age group at the Carifta Games in early April. Now, her ambitions are clearly expanding.

"In the future, I want to be the youngest Olympic medalist in Tokyo 2020, but there are a lot of chances to succeed before then as well."

Two days ago Williams became the youngest to win the 100m crown which today makes her the youngest to claim the 100/200m title. That's notable enough in and of itself, but such an achievement is rare, too. Williams is just the fourth to claim the dash double in the championships' 17 editions, following Jamaican Veronica Campbell-Brown (2000), Bulgaria's Tezdzhan Naimova (2006) and Bahamian Anthonique Strachan (2012).

Jamaica's medal tally comprises three gold, three silver and two bronze; while Kenya have secured four gold and a bronze for a tally of five.

Briana Williams sails through 200m heats at World U20 Championships