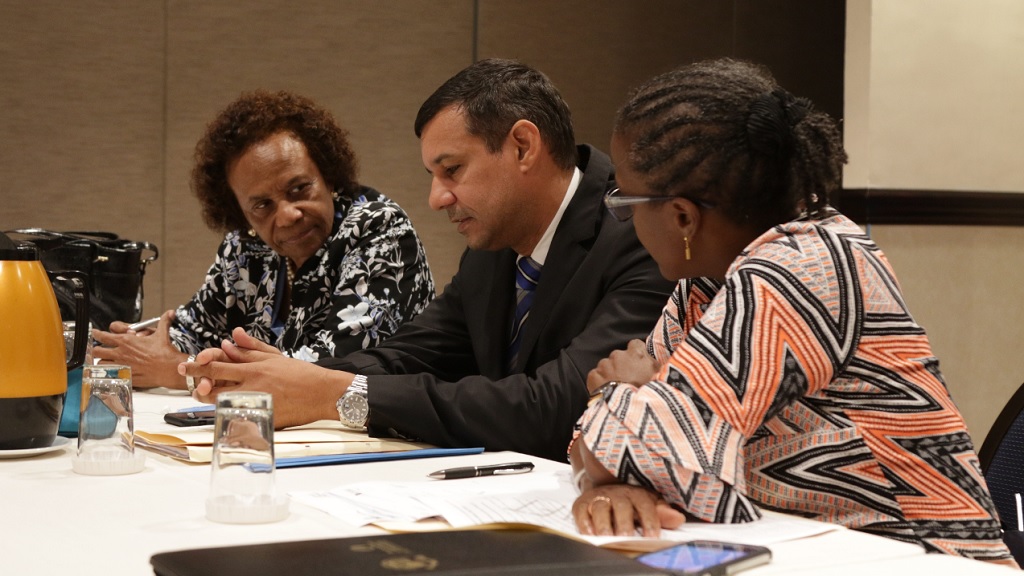 Kent Gammon (centre), chairman of the Independent Anti-Doping Disciplinary Panel, in conversation with other members of the panel Dr Marjorie Vassell (left) and Denise Forrest just before the preliminary hearing in the matter of Briana Williams vs JADCO at the Jamaica Pegasus Hotel on Tuesday, September 10, 2019. (PHOTOS: Ramon Lindsay).

Briana Williams will face the Jamaica Anti-Doping Commission (JADCO) from September 23-25 to answer to her positive test for the banned diuretic Hydrochlorothiazide (HCTZ).

This was disclosed by attorney-at-law Kent Gammon, chairman of the Independent Anti-Doping Disciplinary Panel following a preliminary hearing in the matter, which was held behind closed doors on Tuesday at the Jamaica Pegasus Hotel

"We have set the hearing dates, that the most I will tell you, for the 23rd, 24th, and 25th of September at 10 o'clock. More than likely we might come back here but I will confirm. At that time we will then take the evidence and we will then make our determination accordingly," said Gammon.

The first date of the trial comes four days before the start of the 2019 IAAF World Championships, which will be held in Doha, Qatar from September 27 to October 6.

Williams’ charges are hoping that the 17-year-old, who tested positive for the banned diuretic Hydrochlorothiazide (HCTZ) at the Jamaican National Championships in June, will be cleared to participate at the Worlds.

However, with the trial set to end on September 25, two days before the start of the IAAF World Championships, it is unlikely that Williams will participate at the Worlds if she is clear of any wrongdoings. 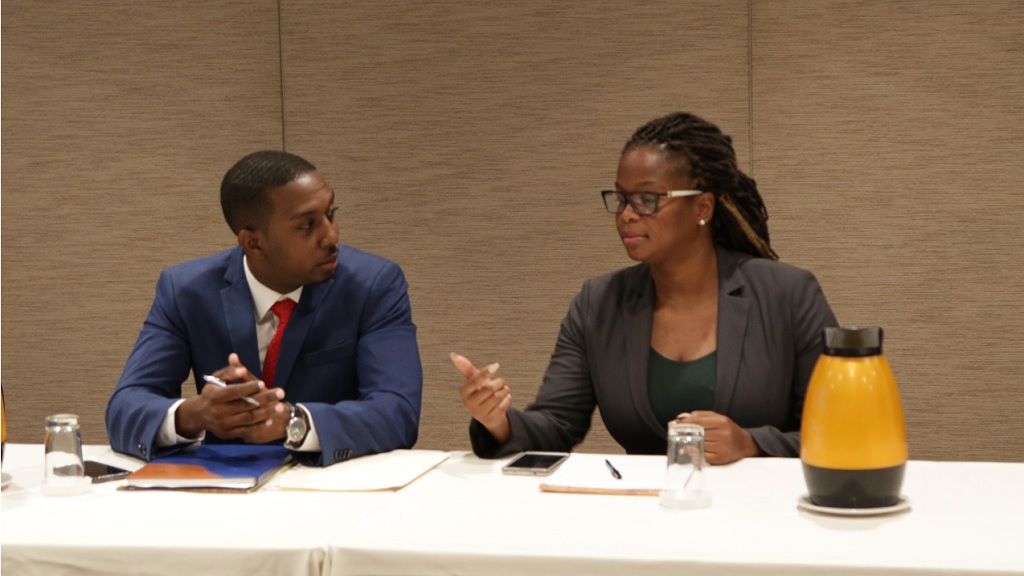 Lawyers Kristie Irving (right) and Xavier Leveridge, who represented Briana Williams at the preliminary hearing, in discussion just before the day's activity started.

When asked if Williams' team had asked for earlier dates, Gammon said "I won't comment on that"

Gammon further stated that "we had a smooth process and I think we are ok with the process today and we are ready to proceed on the 23rd.

"We had the preliminary hearing as to whether the athletes wanted to proceed with a hearing and she chooses to have a hearing. We wouldn't have known that until today and we will proceed on the 23rd and we will make our findings in due course based on the evidence."

Hydrochlorothiazide is a diuretic medication often used to treat high blood pressure and swelling due to fluid build-up. It belongs to a class of drugs known as diuretics/water pills. It causes one's body to produce more urine, which helps the body get rid of extra salt and water.

However, the use of Hydrochlorothiazide is prohibited by the World Anti-Doping Agency (WADA) for its ability to mask the use of performance-enhancing drugs

Williams is being represented by Canada-based sports attorney, Dr Emir Crowne. At the preliminary hearing on Tuesday, a local team of lawyers, which comprise Kristie Irving and Xavier Leveridge represented the athlete.

The young sprint sensation booked her spot on the team to Doha after clocking 10.94 seconds in the 100m final at the National trials to finish third behind Elaine Thompson and Shelly-Ann Fraser-Pryce.

It has been reported that at the National Trials, Williams took over-the-counter Pharma Cold and Flu tablets to fight a high fever while competing in the 100m, where her time of 10.94 seconds was a national junior record and a world Under-18 record.

Williams' legal team is arguing that the medicine that the athlete took was found to contain elements of the diuretic.