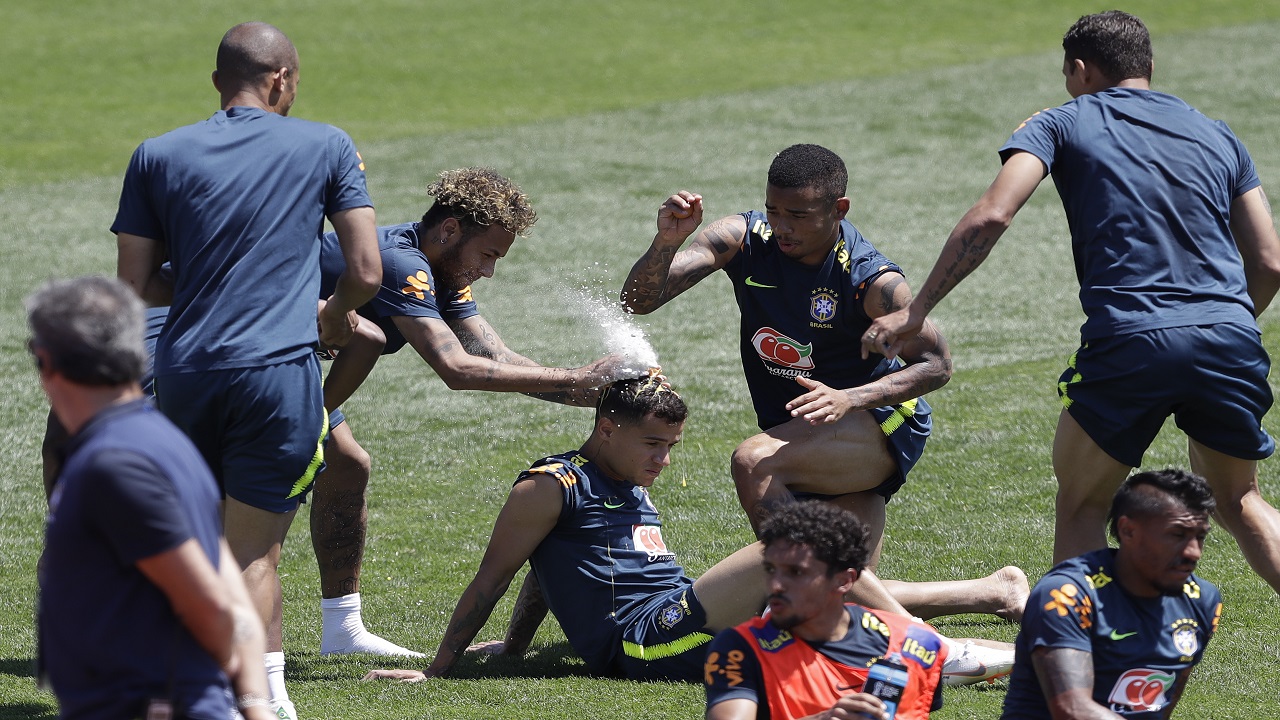 It didn't take long before Neymar and his Brazil teammates started heading to the beach after the team arrived at its World Cup base in Sochi.

The five-time world champions are feeling quite at home at the Black Sea resort city, enjoying warm temperatures and a private beach.

Players were so comfortable, in fact, that the team's first practice session ended Tuesday with Neymar and others throwing eggs and flour at playmaker Philippe Coutinho and defender Fagner, who were celebrating their birthdays. Just two (Neymar and Coutinho) of the world's three priciest players having a laugh ahead of a tournament where they'll be carrying heavy expectations.

Brazil has near-ideal conditions for its World Cup preparations in Sochi, with possibly the closest setting to what the team had back home before traveling to Russia.

"It was a positive first impression, the beauty of the city, its beaches," goalkeeper Alisson said. "We are having lunch and breakfast with a view of the sea. That's a plus for us."

The private beach at the team's luxury hotel was a hit with the players from the start. Neymar was one of the first to take a shirtless walk by the sand on the team's day off on Monday. He and other players posted photos taking time off by the beach.

Brazil practiced for the first time in Sochi on Tuesday and allowed local fans to attend the training session. Nearly 4,000 people were handed tickets to watch the team's first activity on Russian soil.

"It's important to have contact with the local fans," Alisson said. "We are happy that it happened. We'll try to get to know more of their city in the coming days."

Fans loudly chanted Neymar's name during the session, and the squad was at ease throughout. One young fan invaded the pitch to try to get closer to the players, taking a selfie with midfielder Casemiro before being escorted out.

Sochi, which hosted the 2014 Winter Olympics, was always Brazil's first choice for its base. The country's football federation went out of its way to secure the coveted location even before it knew where the team would be playing its matches. The Austrian federation initially picked the five-star hotel where Brazil is staying, but luckily for the Brazilians the Europeans did not end up qualifying for the World Cup.

Brazil will not play any matches in Sochi and will travel more than 4,300 miles (7,000 kilometers) for its group-stage games in Rostov-on-Don, St Petersburg and Moscow.

The federation said it wanted players at a place where they felt comfortable between matches and Sochi was the perfect site with "great infrastructure and a pleasant environment."

Brazil has its own hotel wing and meetings rooms have been transformed into areas where players can meet with family members and friends on days off. In addition to the "Family Room" and the "Friends Room," which are visibly marked with signs on the wall, an area for the players' kids also was created.

"Family means everything to us," Alisson said. "They are the ones who are by our side in the good moments and in the bad moments. Having them near us makes our stay easier."

The hotel's presidential suite, on the terrace overviewing the Black Sea, won't have any guests as it was turned into a fitness area to aid with the players' rehabilitation after matches.

Brazil has been limiting fans' access to players since its chaotic World Cup preparations in 2006, when the usually calm lakeside resort city of Weggis in Switzerland turned into what looked like a state fair as thousands of people flocked to town to watch Brazil's open practice sessions under coach Carlos Alberto Parreira.

Brazil was heavily favoured to win the title in Germany with a team that included Ronaldinho, Ronaldo, Kaka and Adriano, but it was eliminated by France in the quarterfinals.