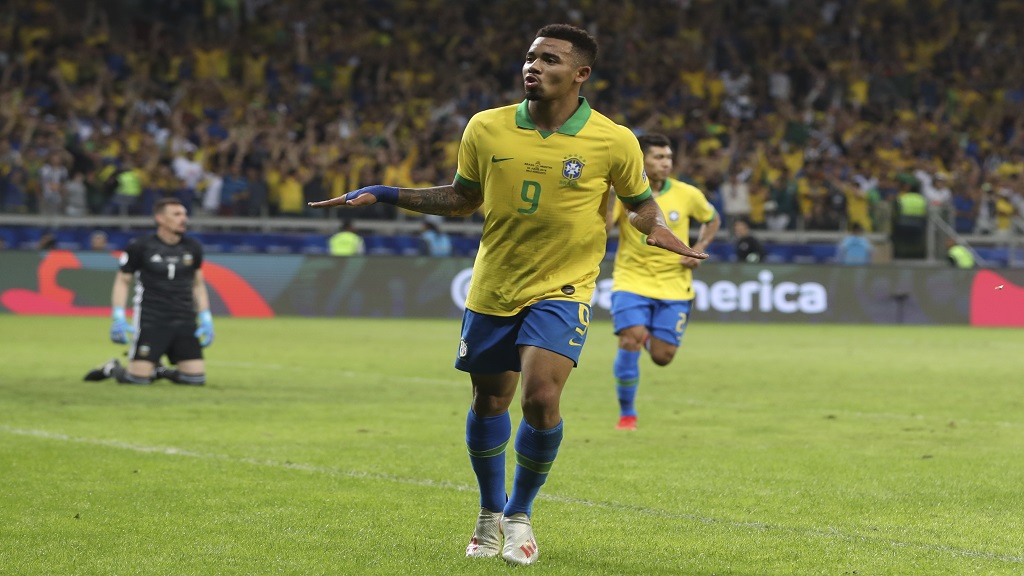 Brazil moved into their first Copa America final since 2007 with a 2-0 win over Argentina in Belo Horizonte on Tuesday.

Gabriel Jesus starred for Tite's men, scoring the opener before setting up Roberto Firmino's sealer in the semi-final at the Estadio Mineirao.

Led by Lionel Messi, Argentina had their chances, hitting the woodwork twice through the star forward and Sergio Aguero.

But their chances were dashed by Firmino's 71st-minute goal as eight-time champions Brazil reached the decider.

In what was a frantic start, Leandro Paredes went close for Argentina, his powerful effort from range going just over.

Jesus had looked bright early and he opened the scoring for Brazil in the 19th minute.

Dani Alves did brilliantly to release Firmino down the right side of the area, the forward crossing for Jesus to convert from close range.

As Brazil appeared content to sit back after their opener, Argentina went close to an equaliser on the half-hour mark.

Messi's well-weighted set-piece from a central area was met by Aguero, whose header bounced back off the crossbar.

Philippe Coutinho had a great chance to double Brazil's lead in the 56th minute, the attacker blazing over after being set up following a wonderful turn by Jesus.

And, just a minute later, Argentina hit the woodwork again, Messi's volley from the left side of the area bouncing off the post after a blocked Lautaro Martinez shot fell to the star.

Argentina continued to dominate as they looked for an equaliser, Messi's 20-yard free-kick comfortably saved by Alisson in the 66th minute.

Instead, Brazil struck on the counter-attack to double their lead thanks to some excellent work from Jesus.

Jesus led a break with a brilliant run from inside his own half before composing himself to square for Firmino to tap in and make it 2-0.

That was the decisive blow as Brazil, who had already sat back after their opener, held firm to progress to the final.

What does it mean? Belo Horizonte ghosts brushed aside

At the scene of their 7-1 mauling at the hands of Germany in the 2014 World Cup semi-finals, Brazil found a way – and got some luck. Argentina hit the woodwork twice, but Brazil did enough to reach their first Copa America final since 2007.

Brazil have never lost a competitive game at home to Argentina and that record was maintained, thanks largely to Jesus. The Manchester City forward was exceptional throughout, scoring once and assisting the other while causing constant problems.

Now 32, Messi's wait for a first senior title with Argentina continues. The star struggled to find top form at the Copa America, although he looked threatening against Brazil.

Brazil will face either Chile or Peru in the final on Sunday, while Argentina meet the loser of that clash in the third-place play-off a day earlier.

Messi admits not playing well for Argentina at Copa America