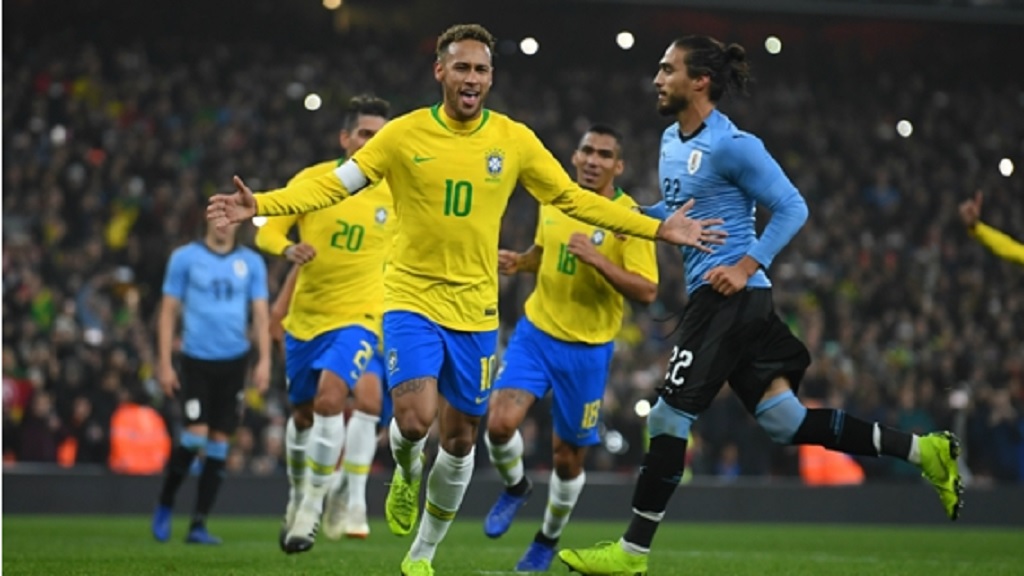 Neymar scored a controversial penalty as Brazil beat Uruguay 1-0 in a tightly fought friendly at Emirates Stadium on Friday.

A resilient display from Uruguay's makeshift defence looked set to end Brazil's winning run, but Tite's side was handed a lifeline when referee Craig Pawson deemed that Diego Laxalt had fouled Danilo.

Uruguay had enjoyed the better of the chances prior to the penalty incident, with Alisson having made a series of fine saves to deny Luis Suarez and Edinson Cavani.

But, despite a hint of handball from Danilo in the build up to the penalty incident and what looked to be an exaggerated fall from the defender, Uruguay's protestations fell on deaf ears as Neymar stepped up to secure Brazil's fifth straight win.

A slick team move resulted in Neymar tucking home in the 11th minute, only for the offside flag to cut Brazil's celebrations short.

It was Neymar's former Barcelona team-mate Suarez that drew the first meaningful save from either goalkeeper, as Alisson reacted sharply to tip the striker's shot over.

Suarez turned provider on the stroke of half-time, floating a wonderful cross into strike partner Edinson Cavani, but Alisson came to Brazil's rescue once more.

Richarlison's introduction sparked Brazil and, although a last-ditch challenge from Miranda denied Suarez a certain goal at the other end, Tite's side had its winner in the 76th minute.

Danilo looked to have handled as he barged his way into Uruguay's area, before going down easily after hanging out a leg to ensure contact with Laxalt – Neymar sending Martin Campana the wrong way from 12 yards, with Richarlison squandering a great opportunity to wrap up the win late on.

What does it mean? Uruguay's future looks bright

At 22 and 19 respectively, Matias Suarez and Bruno Mendez made some impact on their international debuts, more than holding their own against Neymar, Roberto Firmino and Douglas Costa, with Oscar Tabarez's unwavering belief in Uruguay's youngsters justified. Brazil, meanwhile, evidently missed the guile and craft of Philippe Coutinho, and it was only when Richarlison came on and added pace to the front line that Uruguay's defence looked troubled.

Alisson shows his worth

Brazil have two excellent goalkeepers to choose from, but Alisson more than proved his credentials as their number one, making two excellent saves to keep Suarez and Cavani – starting together for the first time since Uruguay's win over Portugal in the World Cup Round of 16 – at bay.

Walace unable to stake his claim
Casemiro's absence from the squad handed Walace an opportunity to demonstrate his qualities at the heart of Brazil's midfield, but he failed to exert his authority on proceedings.

Brazil's global tour continues with a friendly against Cameroon in Milton Keynes on Tuesday, while Uruguay travel to Paris to face world champions France.

No goal for Wayne Rooney in 120th, final England appearance