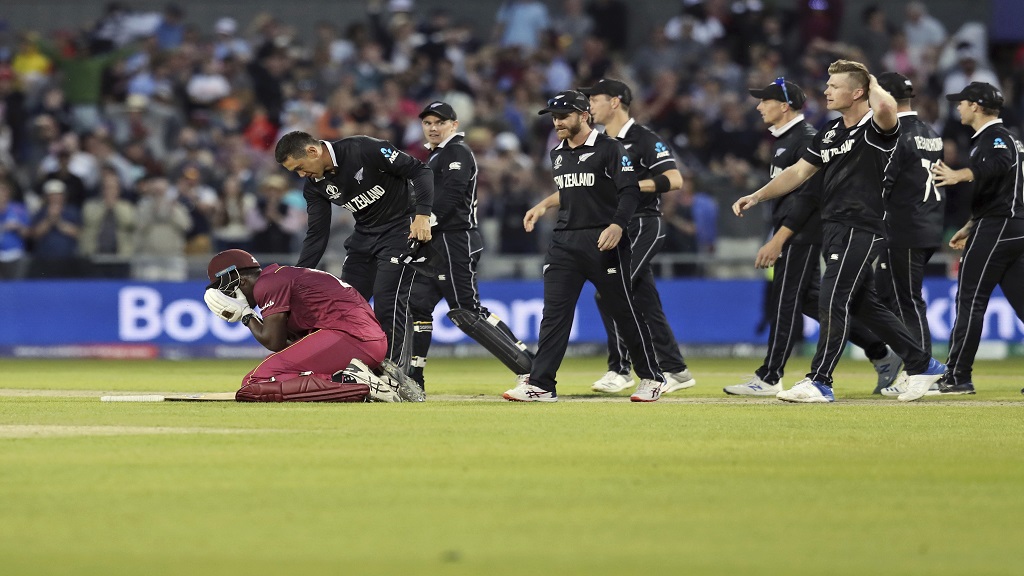 Carlos Brathwaite scored a stunning first century for West Indies but was left devastated when he holed out right at the death to hand New Zealand a dramatic five-run victory in the Cricket World Cup at Old Trafford.

The man who broke England's hearts by clubbing four successive sixes off Ben Stokes in the last over of the 2016 World T20 final was at it again in Manchester, but the terminal shot in his 101 will haunt Brathwaite like his own name will always give Stokes nightmares.

With one wicket to spare, West Indies needed six runs from seven deliveries for an improbable victory on Saturday, and Brathwaite - who had creamed 25 off the bowling of Matt Henry in the previous over - caught hold of a short delivery from James Neesham that was begging to be hit.

The ball soared high and long but Trent Boult at long-on watched it all the way and caught it barely a foot in from the boundary, that fine line between success and failure.

Brathwaite looked on in disbelief as New Zealand celebrated. He had cracked nine fours and five sixes, turning around an innings that contained a collapse from 142-2 to 164-7 at one stage. But the look on his face was of sheer horror.

It meant New Zealand captain Kane Williamson's 148 and Boult's 4-30 were the key match-winning contributions, if not the most spectacular, as the Black Caps racked up another victory.

Still unbeaten, and now surely to be spoken about as trophy contenders, New Zealand racked up 291-8 at Old Trafford. West Indies were all out for 286.

NEW ZEALAND ARE IN GOOD HANDS

Captain Williamson might not often bring out the crowd-thrilling shots that make others stand out, but he is a natural leader with bat in hand.

He and Ross Taylor, who made 69, showed great temperament after coming in with both openers back in the dressing room for golden ducks.

Their third-wicket stand of 160 would have counted for little if Brathwaite had cleared the ropes at the end, but ultimately it meant everything to the Black Caps.

GUPTILL WILL ALWAYS HAVE WELLINGTON, BUT THIS WAS ONE TO FORGET

Four years ago in Wellington, Martin Guptill carted the West Indies attack for a tournament-record 237 not out in the World Cup quarter-finals.

On Saturday he fell for a golden duck, lbw to the first ball of the match. When he reaches the point of reflection on his career, he might not hold Old Trafford in quite the same reverence as WestPac Stadium.