Bolt and Thompson win Sportsman, Sportswoman of the Year awards 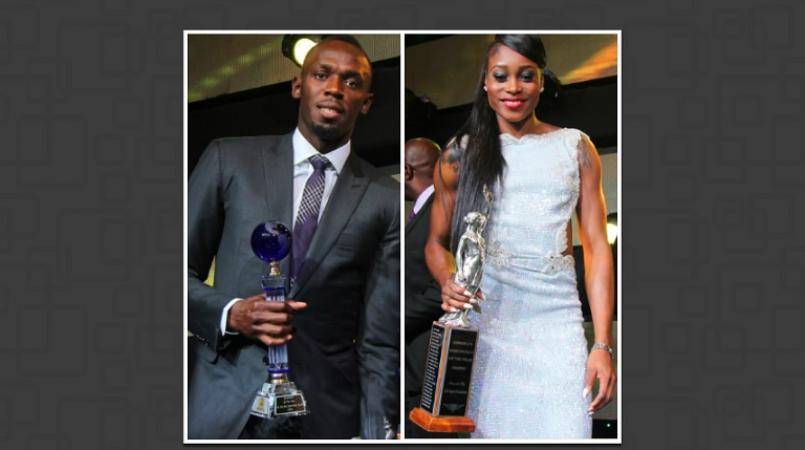 The announcement was made at a gala ceremony at the Jamaica Pegasus hotel.

The choices were expected as the two track and field athletes performed well at the 2016 Rio Olympics in Brazil.

The 30-year-old Bolt completed his amazing Olympic "triple triple" of 100 metres, 200 metres and 4x100m relay golds at the Rio Games in August.

The award was the second major award for Bolt since his achievements in Rio.

Last month, Bolt was named track and field's male athlete of the year, winning the award from the sport's governing body for a sixth time.

He also went undefeated throughout the whole season at all distances, including heats.

Bolt intends to retire after the 2017 World Championships in London.

Omar McLeod, who won the gold medal in the men's 110-metre hurdles in Rio to give Jamaica its first victory in event at the Olympics, was named runner up to Bolt.

Only three persons were nominated for the National Sportsman of the Year award. The other was West Indies cricketer Marlon Samuels.

Thompson was winning the Sportswoman of the Year award for the first time.

The 24-year-old Thompson, who was competing at her first Olympics, produced a stunning runs to achieve  a sprint double in Rio.

She is the first woman to complete the Olympic sprint double since Florence Griffiths-Joyner at the 1988 Seoul Games.

In a brilliant season, Thompson also equalled the national 100-metre record, clocking 10.70 seconds at the National Championships on July 1 to equal the mark set by Shelly-Ann Fraser-Pryce in 2012.

Thompson ended the year in glory by winning the IAAF Diamond League series in the 100 metres and finished second in the 200-metre series.

Swimmer Alia Atkinson, who set a new world short course record in the 50-metre breaststroke at the Tokyo stop of the FINA World Cup Tour on October 26,was runner up to Thompson.

Also nominated for the Sportwoman of the Year award were track and field athletes Shericka Jackson and Shelly-Ann Fraser-Pryce and cricketer Stafanie Taylor.

Meanwhile, the People's Choice Performance of the Year 2016 award, which was decided by a public vote, went to Calabar's Christopher Taylor for his anchor leg run in the 4x400m at the Boys and Girls' Athletics Championships; while racehorse trainer Wayne DaCosta was presented with the Chairman's awards.

Loop News photographer Richard Baker was at the Jamaica Pegasus hotel for the moment. See photos in slider:-