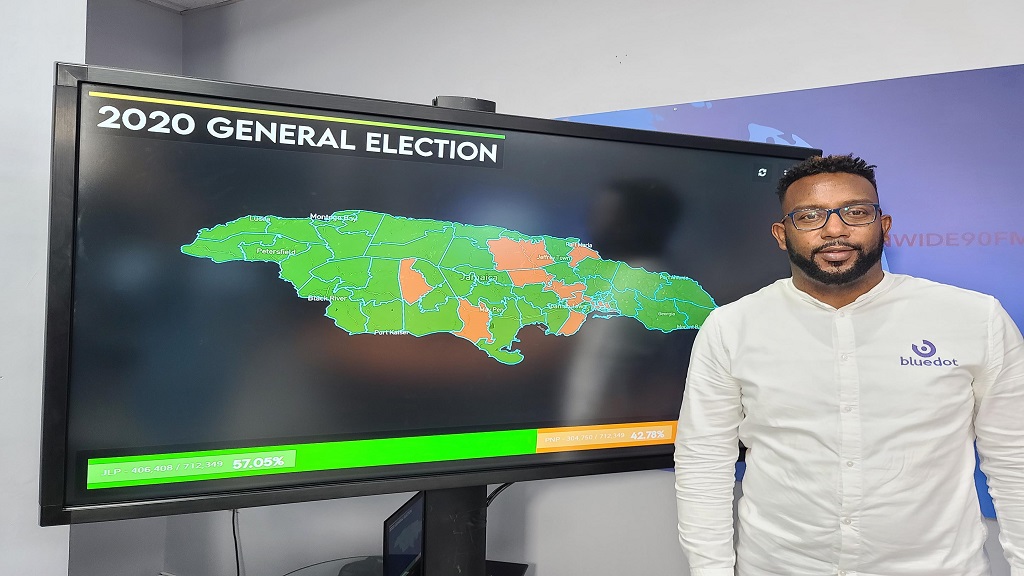 A new era of Jamaican politics has been ushered in as more political campaign strategists are turning to innovative technologies in hopes of securing victories for party candidates across both divides in the island’s local and general elections.

The newest innovation from Bluedot Insights, one of Jamaica’s leading market research companies providing data mining, data analytics and predictive analytics services, is the first to provide real-time results from its tech-driven data insights via the company’s Live Poll Dashboard.

The one-of-a-kind technology’s rapid turnaround allowed local political candidates and their teams, as well as persons from anywhere in the world, to view live polling data being submitted electronically by the Bluedot field team during the campaign period leading up to the recent 2020 General Elections.

Larren Peart, Bluedot’s founder and chief executive officer, said, “This election was primarily about groundwork. So, we focused on information that would help the candidates to make datadriven decisions by polling what constituents were saying about them and what they outlined as some of their issues.”

Peart’s team was hired to conduct constituency polls for 14 political candidates from both the Jamaica Labour Party (JLP) and the People’s National Party (PNP).

“The poll was tailored to collect as much verbatim opinions as possible. And, because we use GPS, we were able to instruct our clients to go to specific areas – down to the street level – to address the stated needs. We advised the candidates on how to approach that particular area based on sentiment data and they were able to tailor their messaging to speak directly to those needs once we noticed a trend. They acted quickly and that played a key part in their success.” 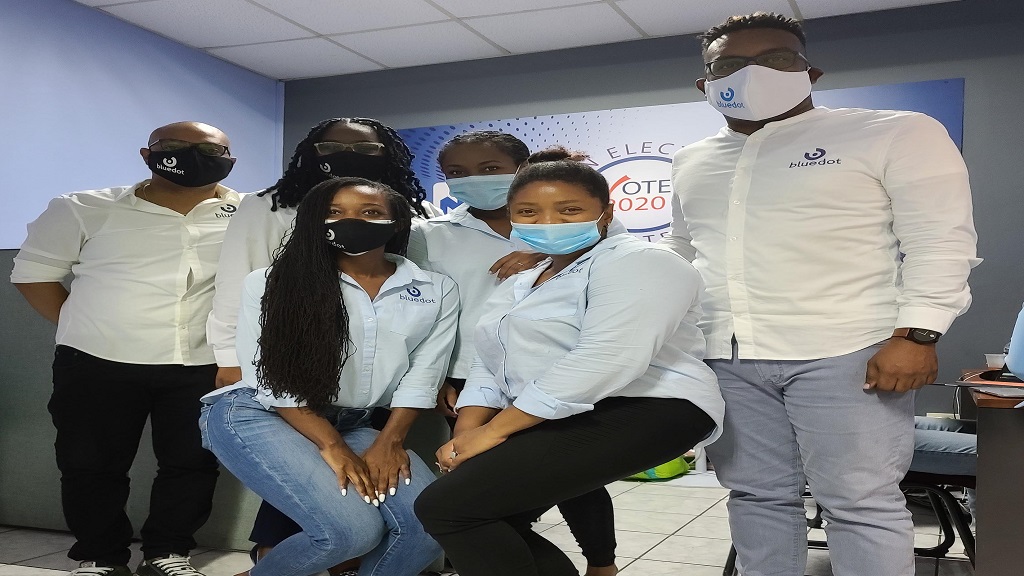 Larren Peart (right), Bluedot Insights founder and chief executive officer, stands with his team who spearheaded the tech-driven data analysis of the 2020 General Election in Jamaica.

The six-year-old company also boasts being the first in the world to use neuroscience to predict outcomes, as it did with the winner of the East Portland by-elections in 2019, and having Bluedot Comuna, the only online panel in the Caribbean which it uses to instantly tap into a pool of 14,000 nationally representative Jamaicans to conduct surveys at any given time.

All had accurately predicted the historic win by the JLP that secured 48 seats to the PNP’s 15 seats on September’s Election Day.

The results also provided vindication for pollsters who had recently come under heavy scrutiny by politicians and the wider public questioning their accuracy and objectives.

Kevin O’Brien Chang, political commentator, columnist and author for more than 20 years, said, “I’m a poll follower; they’re objective, independent and scientifically based. They give us reality, not just our personal views and opinions of where we are or political propaganda … the polls have no personal prejudices in them, so it raises the quality of the debate and we get a better democratic decision within the end – one based on facts, and not hearsay and propaganda.”

He continued, “When things are swirling all around you, it’s exciting and there are a million voices talking. But what do you pay attention to? Scientifically conducted independent polls are beholden to nobody, they’re not pushing any agenda except working to reflect what people on the ground are really saying. It helps the decision makers to say: ‘maybe our assumptions are wrong; let us change strategy’.”

Standing by methodologies that include both the use of technology and traditional means, Bluedot’s Chief Insights Officer Chavanie Bright maintains that the results, provided in partnership with Nationwide News Network, were always unbiased and accurate.

“We knew pretty early on that it was going to be a national swing and we made conservative predictions of 41-22,” she said. “For example, when looking at the numbers from Westmoreland Central, St. Elizabeth North Eastern, and also in the case of Manchester Central where we saw that the traditionally PNP-leaning Bellefield division showed signs of a flip, it confirmed to us that there was going to be a significant national swing.”

Professor Donna Hope, a political science and political philosophy expert who has provided more than 30 years of political commentary, opined that the new technology is already a game changer in terms of how parties and future candidates will approach their communications strategies.

She said, “Data is very important in strategising for any kind of activity that needs to target a broad sub-section of people. This is critical as you have to know and understand the population, the constituency, the consumer base or whatever you’re targeting so you’re able to meet their needs in a specific way.”

“You can’t be generalising when you want to win over the opinions, the votes, the resources or money of a group of people. If we a have a team or entity that can offer that kind of data in real time, then people would be more interested in going in that direction. So, Bluedot coming in with that kind of live data interface, from my own experience in working in the field of culture and observing the kind of politics we have in Jamaica and the region, it would suggest that they have a top formula that strategies can be birthed from.”