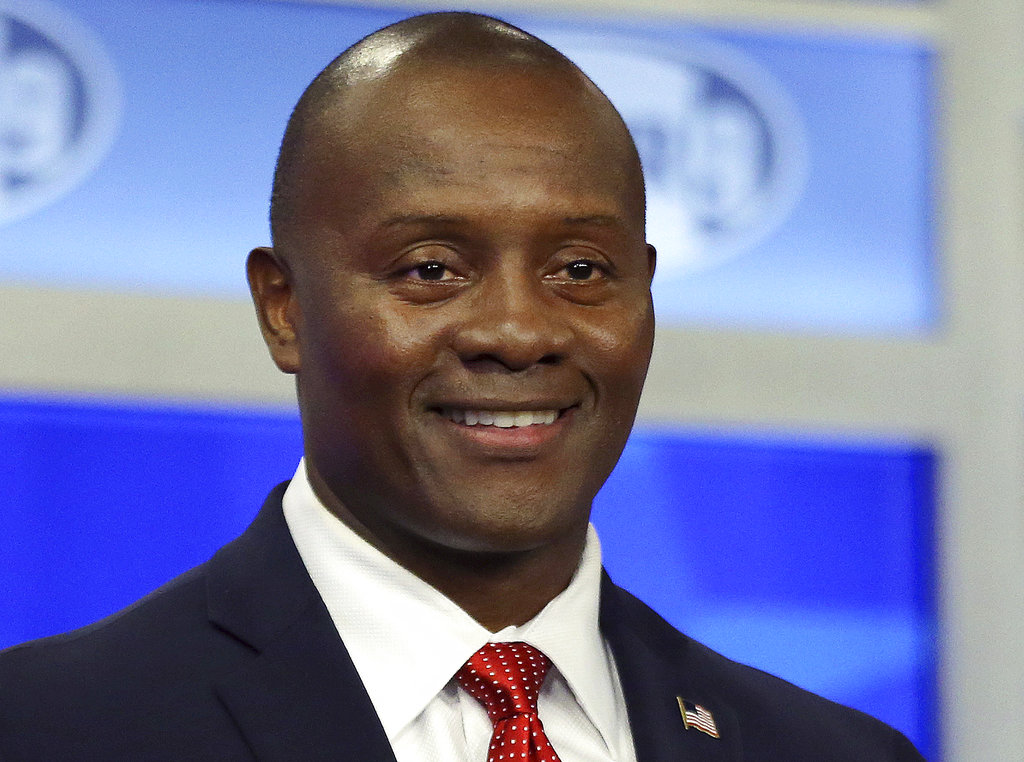 A black former police chief backed by the Trump administration won the Republican nomination Tuesday in New Hampshire's toss-up congressional district, while Democrats picked experienced, establishment-backed nominees for both that seat and for governor.

Eddie Edwards, who was endorsed by Trump attorney Rudy Giuliani, defeated six Republican opponents in the 1st Congressional District, which covers the eastern half of the state. A Navy veteran who also served as enforcement chief for the state liquor commission, Edwards is the second African-American to be nominated to a U.S. House seat in New Hampshire.

The district, which covers the eastern half of the state, was once reliably Republican but has flipped in each of the past four cycles. In 2016, it returned Democrat Carol Shea-Porter to Congress but backed President Donald Trump.

Shea-Porter's decision to step down after four nonconsecutive terms resulted in a swarm of candidates seeking to replace her, including Levi Sanders, son of Vermont senator and former presidential hopeful Bernie Sanders. He came up far short Tuesday in an 11-way race won by restaurateur Chris Pappas, who would be New Hampshire's first openly gay member of Congress.

Former Obama administration official Maura Sullivan raised more money than the 10 other candidates combined, but she faced criticism for being both new to the state and voting in general, having just moved to New Hampshire last year and acknowledging she failed to vote in several recent elections.

Pappas is a former state lawmaker who is serving his third term on the governor's Executive Council and runs a family restaurant in Manchester. He had the backing of the state's two Democratic U.S. senators, and said he was proud that most of the money he raised came from within the state.

Pappas told supporters Tuesday evening his campaign will be about decency, unity and progress. He described meeting an LGBTQ student in Manchester who said she was unsure of her place in the community.

"She needs a role model and a champion, too, and I hope this historic victory tonight has some small impact in making her understand this fact: You, too, are welcome here, and regardless of who you are or who you love, the sky's the limit," he said.

Edwards had sought to make the race about character, and said he'd refuse to support his rival, state Sen. Andy Sanborn, as the nominee after he was accused of sexual harassment at the Statehouse.

"People demand change in Washington," Edwards said. "They yearn for honesty, integrity, and leadership. They want to vote for someone who has served our country and understands the honor that comes with that responsibility."

Kelly said strong Democratic turnout should send a message to Sununu that voters want someone who will put the people first, not corporate special interests. A five-term senator from Harrisville, she frequently emphasized her experience as a single mother who raised three children while putting herself through college.

"The people of New Hampshire know that I will fight for them every single day because I understand their struggles," she said in a statement Tuesday night. "Chris Sununu should not underestimate me. I've been underestimated before."

Stewart Levenson, a whistleblower doctor who had flagged abuses at the state's veterans hospital, conceded victory early Wednesday to Republican rival Steven Negron, a state lawmaker, in a hard-fought primary to face Democratic U.S. Rep. Annie Kuster in the 2nd Congressional District. Kuster, too, faced no opposition in the primary.

Accustomed to going first in the presidential primary, New Hampshire voters were among the nation's last to nominate candidates for November, providing one of the final measures of the country's mood before the midterm election.