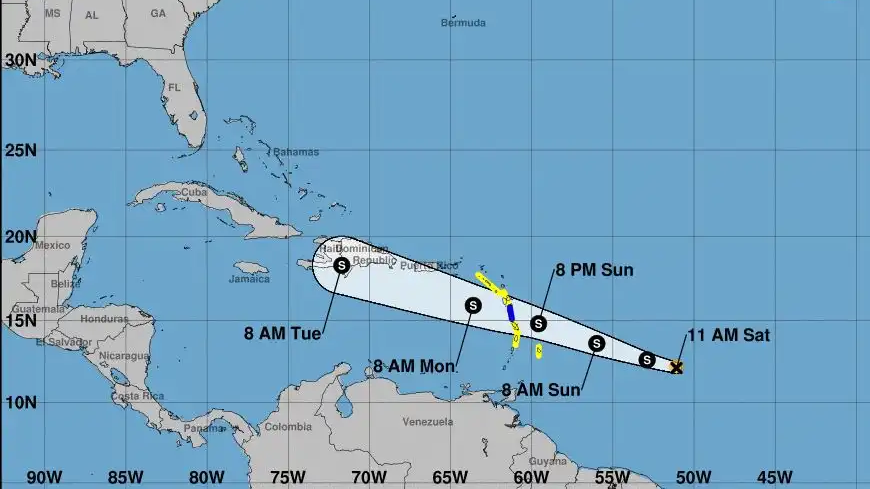 In an update from the National Hurricane Centre (NHC) in Miami, Florida, issued at 11 am on Saturday, it was reported that the former Hurricane Beryl has weakened to a Tropical Storm.

The Hurricane watch for Dominica, which was implemented at 5 pm on Friday, has been discontinued.

Tropical Storm Beryl is at this time about 720 miles off of the Lesser Antilles and has maximum sustained winds of 65 miles per hour or 100 km per hour.

A Tropical Storm Warning means that tropical storm conditions are expected somewhere within the warning area.

A Tropical Storm Watch means that tropical storm conditions are possible within the watch area.

The NHC advises that interests elsewhere in the Lesser Antilles should monitor the progress of Beryl, as additional watches or warnings could be required later today.

At 11 am the centre of Tropical Storm Beryl was located near latitude 12.1 North, longitude 51.1 West. Beryl is moving toward the west-northwest near 14 mph (22 km/h).

A west-northwestward motion with an increase in forward speed is expected during the next few days.

On the forecast track, the centre of Beryl will approach the Lesser Antilles over the weekend, cross the island chain late Sunday or Monday, and move south of the Virgin Islands and Puerto Rico on Monday and Monday night.

Maximum sustained winds have decreased to near 65 mph (100 km/h) with higher gusts.  Additional weakening is forecast during the next 48 hours, especially once Beryl reaches the eastern Caribbean Sea on Monday.

The system could degenerate into an open trough by the time it reaches the central Caribbean Sea and Hispaniola on Tuesday.

Beryl is a small tropical storm.  Tropical-storm-force winds extend outward up to 35 miles (55 km) from the centre.

Beryl is expected to produce total rain accumulations of 2 to 4 inches through Monday across the southern Leeward and northern Windward Islands.  Across the remainder of the Leeward and Windward Islands, the Virgin Islands, and Puerto Rico, rainfall amounts of 1 to 2 inches with locally higher amounts are expected.