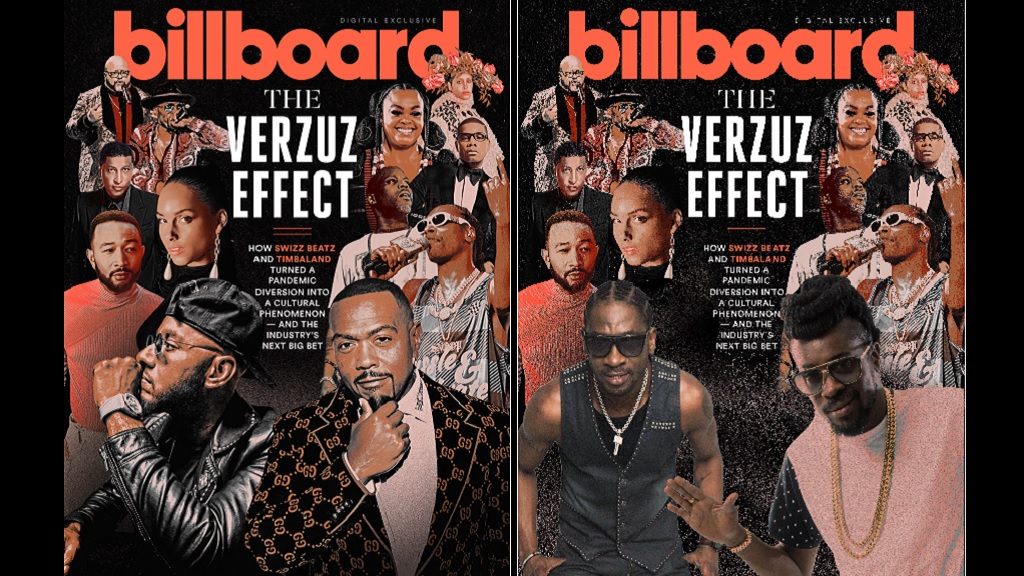 At left is the artwork for the Billboard cover story on the Verzuz series, while at right is the photoshopped version which features dancehall legends Beenie Man and Bounty Killer.

Fans of dancehall legends Beenie Man and Bounty Killer reacted in consternation and dismay Monday when Billboard magazine released the digital cover art for its story on the popular Verzuz battle series.

The graphic for the cover story, 'The Verzuz Effect', features the likes of Alicia Keys, John Legend, Babyface, Teddy Riley, Snoop Dogg, DMX and other American stars who have participated in the series, but fails to highlight the Jamaican dancehall legends who have been credited with raising the standard of the show.

Amid the backlash against the magazine, American producer Swizz Beatz, who co-founded Verzuz with rapper/producer Timbaland, posted a photoshop of the cover which swapped his and Timbaland's faces with those of Beenie's and Bounty's and acknowledged the contribution of the dancehall icons. The photoshop was reposted on Timbaland's Instagram account and that of the Verzuz series itself.

Beenie and Bounty also reposted the photoshopped cover, however, both voiced their disappointment in being omitted from the cover art, believing it was a thinly veiled diss of not only them, but of the dancehall genre as a whole.

"Big up Swizz and Timz but this is what our genre face! Everybody fwd and tek piece and build up dem ting and then do everything to undermine the genre Dancehall where they got it from," Beenie wrote on Instagram.

The episode has put a bad taste in the mouth of Jamaicans who had salivated over the clash a few months ago.

One social media user on Twitter summed it up succintly when he said: "Beenie and Bounty being left off of the Billboard cover is weird, and with all due respect, a photoshop edit (that won’t make the cover) doesn’t make it better. I genuinely think Tim and Swizz mean full well, but to be the second highest streamed Verzuz and be omitted..strange"

The two men, who had one of the best clashes in Verzuz history, attracted at least 475,000 viewers who logged on to watch the perennial-rivals-turned-friends go tune-for-tune in the series of online battles amid the coronavirus crisis which has triggered lockdowns all over the world.

Another social media user added that the omission shows scant regard for the genre that originally birthed the Verzuz concept with its annual Sting clashes and sound system clashes.

"Some others were higher in viewership but Beenie & Bounty definitely had the greatest impact that reached across genres & the relating fan base including Diasporas. Also the current face to face format was birthed by their edition too. Big up #soundclash culture," the social media user said.