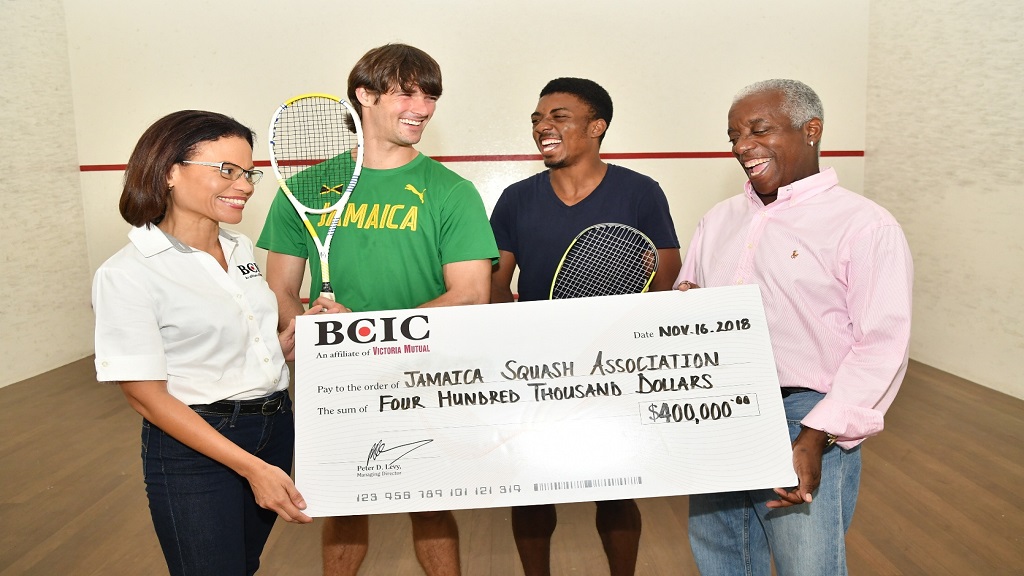 BCIC has stepped up its support for local squash with a $400,000 sponsorship package for the staging of the 2018 All Jamaica Senior Championships.

Following on its sponsorship of the All Jamaica Junior Squash Championships in June, the insurance giants will now headline the senior tournament, which is scheduled to run from November 19-23 at the Liguanea Club in Kingston.

All eyes will be on the top Jamaican and Caribbean player, Chris Binnie who will be chasing his seventh consecutive title to take his career tally to eight. Retaining his position as national champion will cap off a stellar year for Binnie who won a historic silver medal at the Pan American Squash Champions in August and a bronze medal at the Central American and Caribbean (CAC) Games in July.

Among those looking to unseat the defending champion are longtime rival, Bruce Burrowes, an experienced campaigner; as well as former junior national champion, Tahjia Lumley, who will no doubt make his presence felt at the senior level.

The tournament will also see the return of former men’s champion, Dane Schwier who should mount a strong challenge to retake the title.

The ladies competition should be equally exciting with former junior Caribbean champions, sisters Akelia and Larissa Wiltshire seeded at number and number two, respectively; paving the way for a family affair in the finals.  However, to play for the championship, the siblings will have to get past last year’s runner-up, squash starlet, Alex Jordan whose sights are set firmly on the top prize.

Also in the hunt are All Jamaica Under 17 champion, Mia Mahfood and her arch rival and fellow junior national team player, Mia Lake, who will both be firing at the top guns, hoping to make their breakthrough this year.

Tournament Director, Douglas Beckford said, “we expect that this year’s championships will be an exciting and highly competitive tournament as we will have Chris Binnie trying to extend his winning streak while all the rest of our top men’s players will be going all out to beat him.

"Then on the ladies side we can look forward to seeing the Wiltshire sisters in action and we might even see one of our junior players claiming their first senior title, which is always good for the continued growth of the sport.”

Simone Foote, BCIC’s Marketing Manager said, “BCIC is excited to partner with Jamaica’s most prestigious squash tournament. We were impressed with the stellar competition and the excellent sportsmanship we saw at the Junior tournament in June and it’s our pleasure to be back on board for the senior championships where the country’s best players will be in action.”

In addition to the main draw for the men and ladies, the tournament will feature several other categories including the Ladies and Men’s B Draw, the Men’s C Draw and the Male and Female Veterans’ competitions.