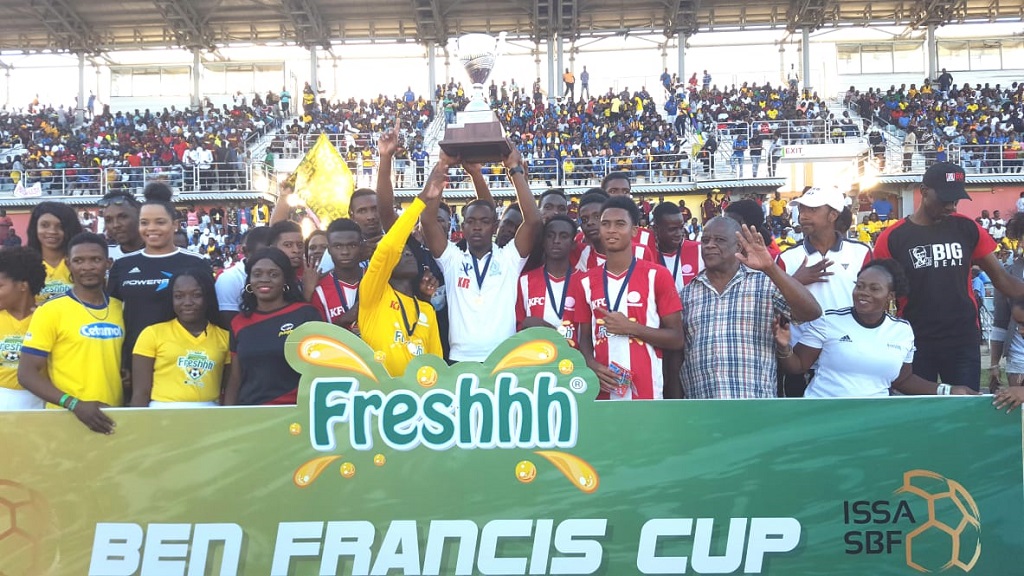 Ninety minutes were not enough to decide the urban area knockout champion, as BB Coke won their first ever Ben Francis Cup as they took down Garvey Maceo High 4-2 in penalty kick at the Montego Bay Sports Complex on Saturday.

With things tied up at 2-2 after regulation time, the game went straight to penalty kicks to determine the winner.

After beating Manchester High 2-1 in the semi-finals to clinch their spot in the final, BB Coke goalkeeper Shavar Foster played the hero in the shootout by stopping substitute Rajae Morrison attempt to get the 2007 champions Garvey Maceo back into the game.

At that stage Garvey Maceo had scored one penalty from three attempts, while BB Coke had netted two from two. The St Elizabeth-based BB Coke then closed in on victory when Kaymani Case put them 3-1 ahead after both teams had took three penalties apiece.

Shamar Robinson then sealed the historic victory for BB Coke by easily beating substitute goalkeeper Craig Bailey from the spot after Tavan Richards had scored the fourth kick for Garvey Maceo, their second goal.

With the victory, BB Coke becomes the 15th school to win the title.

Earlier, Garvey Maceo clawed their way from two goals down and had a chance to pull off a sensational victory on the stroke of full time when they were presented with contentious penalty. However, the Garvey Maceo fans were left in shock after Barrington Blake booted his spot kick high over the cross bar.

Jason Dyer (33rd minute) and Christopher Nelson (47th minutes) had given BB Coke a 2-0 advantage in their first trip to the final, but Marvin Williams (57th minute) and Jermaine Muirhead (88th minute) responded for Garvey Maceo in an action packed encounter.

The Ben Francis Cup has lost its importance since last season because of a change in format, which denied the top four teams in the daCosta Cup competition from competing.  The eight teams that finished third and fourth in their respective daCosta Cup quarter-final groups contested the competition, which comprised quarter-finals, semi-finals and the final.