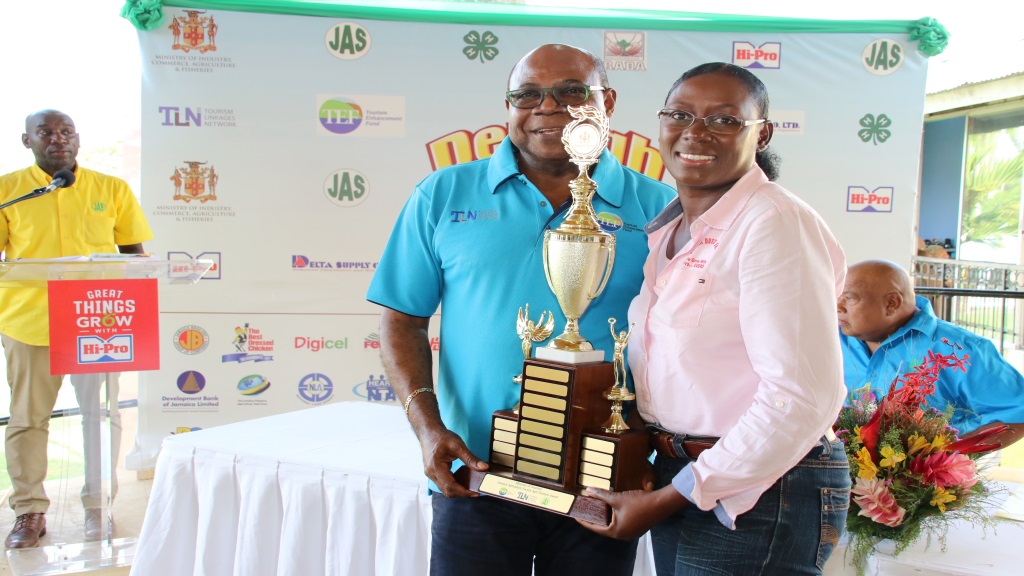 Tourism Minister, Edmund Bartlett, makes a special presentation on day one of the Denbigh Show in Clarendon.

In addressing the Denbigh show in Clarendon on Sunday, Bartlett said there is far more to agriculture-related tourism potential than most Jamaicans know of and appreciate.

He said while 88 per cent of world’s travel is influenced primarily by food, and 42 per cent of the global tourism spend is also on food, there is likewise another major drawing card for tourists in relation to farming.

In declaring that agricultural-related tourism “is not just about the food”, the minister said “it is also about investigating the production processes behind the specialised foods that destinations are noted for.”

He also said it has been estimated that the national demand for food in tourism is $40 billion, but the country is presently supplying only about 10 per cent of that demand.

As an example of the scope of benefits from that market, Bartlett cited that an average of five eggs are consumed daily by visitors, with over 4.5 million visitors projected for this year.

“Do the Math(s)!” the minister urged his audience.

He also drew attention to a community project which he said was forged in the Lilliput area of St James. He said with the support of the Rural Agricultural Development Authority (RADA), a hydroponic agricultural project was establish in backyard gardens that “produced rich and ripe tomatoes, lettuce and…, which they have been able to sell to the hotels in the area, and get paid for their produce.”

He said not only has the project been financially satisfactory, “but there is now more inclusiveness and the people in the community feel a greater sense of belonging to the tourism sector,” which surrounds them.

The ministries of tourism and agriculture, through the Jamaica Agricultural Society ((JAS), organisers of the annual Denbigh Agricultural Industrial and Food Show, have forged a broad understanding to jointly foster the island’s thrust to develop and expand the agricultural tourism market. This move has been pronounced in the close collaboration with the Denbigh Show, where tourism displays are on the slate, perhaps for the first time in the show’s 67-year history.

Denbigh under way minus the GG; said to be due to other state duty