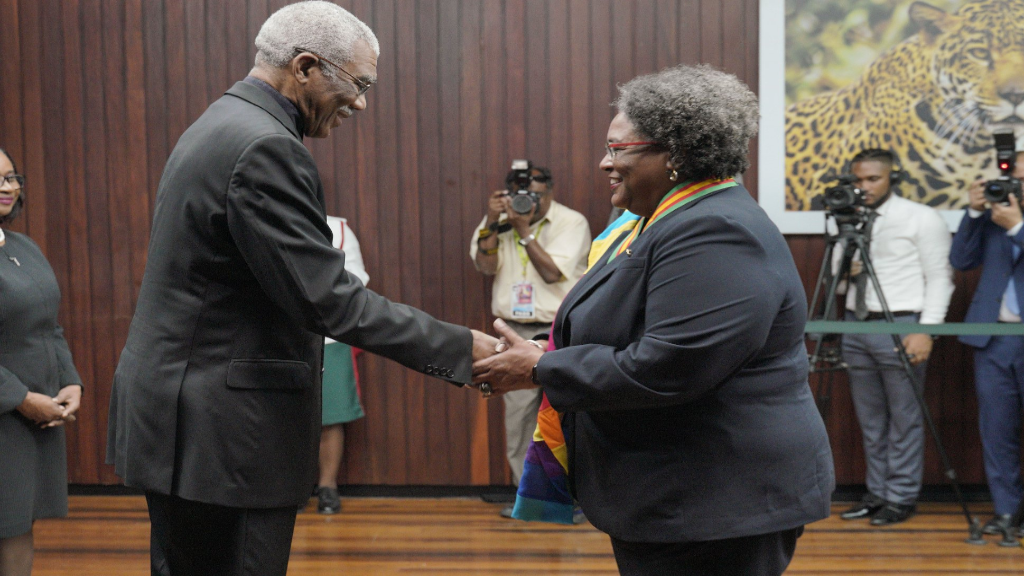 Chairman of the Advisory Council of the Orders of Guyana, Justice Yonette Cummings-Edwards, explained that Mottley was given the award due to her commitment towards the Caribbean Community (CARICOM) and Caribbean Single Market and Economy (CSME).

“This year is the Golden Jubilee and it is significant that this Dear Land of Guyana pays special honour to a distinguished citizen of CARICOM, Prime Minister Mia Amor Mottley, who has rendered outstanding service and valuable service to the Caribbean region,” Cummings-Edwards stated.

President David Granger said the award is another notch in Guyana and Barbados’ history of friendship and collaboration.

“The conferral of Guyana’s order of Roraima on Barbados’ Prime Minister exemplifies the essential elements of the historical fraternal relations between our two Caribbean states. This investiture is richly symbolic for Guyana, for Barbados and the Caribbean. Our two states pioneered the founding of the Caribbean Free Trade Area in 1965, prior to independence,” he stated.

Mottley thanked Granger and the Guyanese people for the award saying that she was not accepting the award only on her behalf but the people of Barbados.

“The path of our two countries is inseparable and I look forward to our being able to build on that relationship because it is only in working together on a common mission that we shall achieve for our people,” Mottley added.

Mottley, who is the Chairman of CARICOM, received the award before her visit to the CARICOM Secretariat that is located in the Guyanese capital Georgetown.

Barbados PM vows to support the people of Dominica