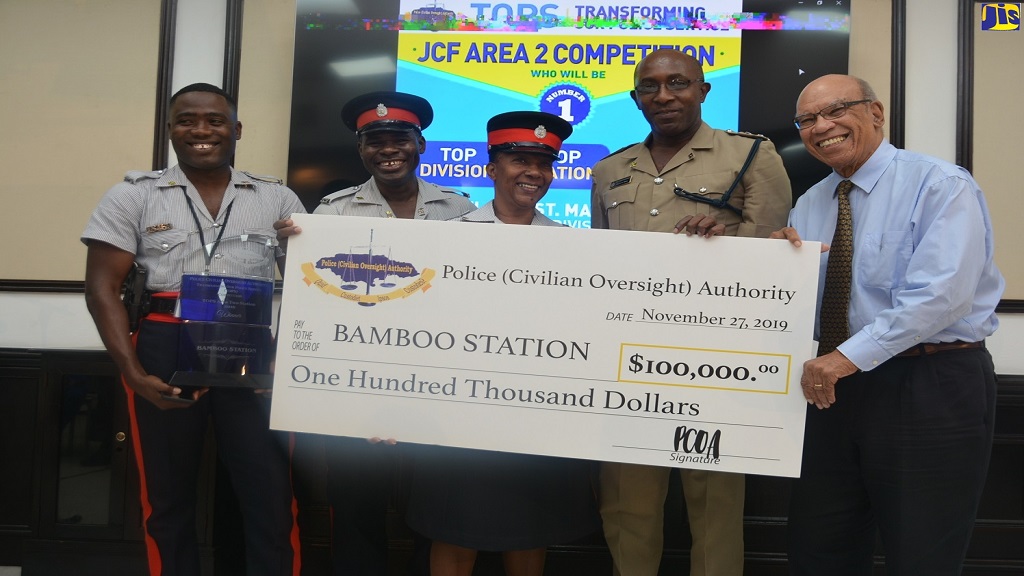 Bamboo topped 31 police stations across the Jamaica Constabulary Force (JCF) Area 2 network, comprised of St Mary, St Ann and Portland, in a pilot initiative that began on September 16 and ended on October 31.

The stations were judged on their compliance with specific JCF standard operating procedures, such as records management, station administration, station facility, utilities conservation and customer service.

During the TOPS Competition Awards Ceremony, which was held at Couples San Souci resort in St Ann on November 27, Bamboo Police Station was awarded the winning trophy and a cheque valued at $100,000.

Sub-officer in charge of station, Sergeant Patricia Brown, told JIS News that the competition was a worthwhile initiative, as it should help to improve police operations and accountability, as well as boost staff morale.

“I am feeling elated, I am overwhelmed, and I don’t have enough words to express about winning this award,” said Sergeant Brown, who has been at the station for the past three months, along with 17 other staff members.

For her part, PCOA Chief Executive Officer, Otarah Byfield-Nugent, said the competition was aimed at raising the level of compliance, standards and procedures among members of the JCF.

“We understand that you work under very stressful conditions, sometimes under very undesirable conditions, but we want to show you that we recognise the value of your service, and we are hoping that by creating a competitive element or environment, you will be encouraged to perform,” Byfield-Nugent told the JCF members.

She also indicated that the initiative highlighted the importance of the internal or back office process at police stations.

Meanwhile, Police Commissioner, Major General Antony Anderson, in a message delivered by Assistant Commissioner of Police (ACP) Clinton Laing, commended the PCOA on the initiative that examines the JCF’s service and standards.

“It is our hope that this pilot initiative is the beginning of greater partnerships for the future,” he said.