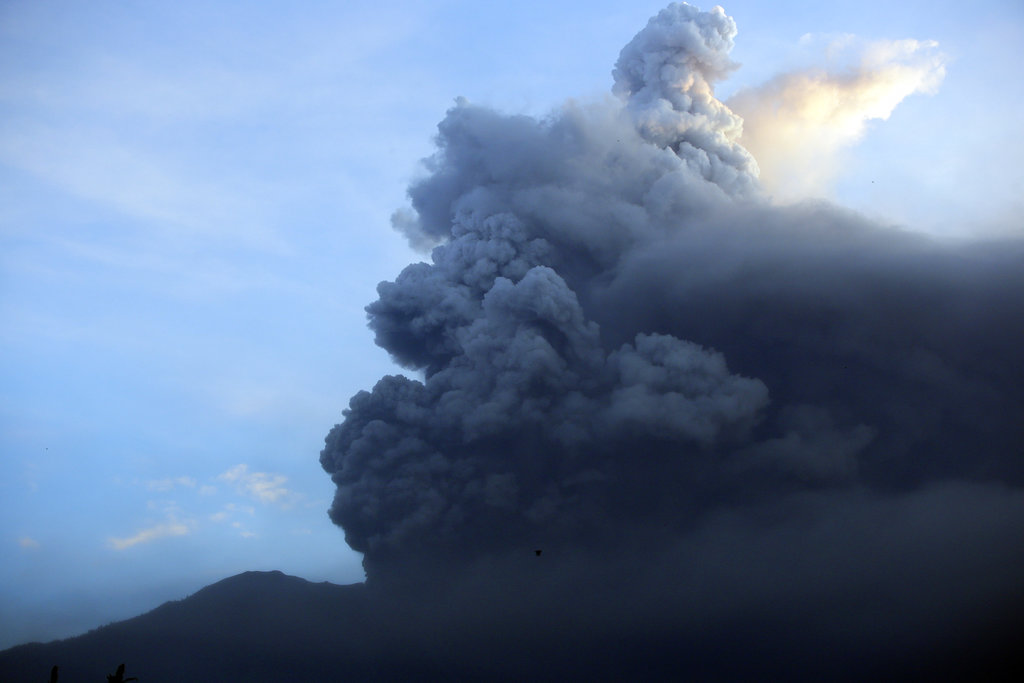 A volcano on the Indonesian island of Bali has rumbled to life with eruptions that dusted nearby resorts and villages with ash and forced the closure of the small international airport on neighboring Lombok island as towering gray plumes drifted east.

Mount Agung erupted on Saturday evening and three times early Sunday, lighting its cone with an orange glow and sending ash 4,000 meters (13,000 feet) into the atmosphere. It is still gushing and the ash clouds have forced the closure of Lombok island's airport until at least 6 a.m. Monday, an official at the airport said.

Most scheduled domestic and international flights were continuing Sunday at Bali's busy airport after a rash of cancellations on Saturday evening.

Disaster officials said ash up to half a centimeter (less than half an inch) thick settled on villages around the volcano and soldiers and police had distributed masks.

Authorities warned anyone still in the exclusion zone around the volcano, which extends 7.5 kilometers (4.5 miles) from the crater in places, to leave.

Made Sugiri, an employee at Mahagiri Panoramic Resort, located around 10 kilometers (6 miles) from the crater, said a thin layer of volcanic ash reached the area.

"We are out of the danger zone, but like other resorts in the region, of course the eruptions cause a decrease in the number of visitors," he said.

"I think these latest eruptions are more dangerous, given the thick clouds it's releasing," he said. "Certainly we worry, but we have to wait and see. Hopefully there is no significant eruption."

Government volcanologist Gede Suantika said a red-yellow light visible in ash above the mountain was the reflection of lava in the crater. Suantika said Agung could spew ash for at least a month but did not expect a major eruption.

Australian airline Jetstar, which canceled nine flights to and from Bali on Saturday evening, said most of its flights would operate normally Sunday after its senior pilots assessed it was safe to fly. However, it warned that the movement of ash cloud is highly unpredictable and that flights could still be canceled at short notice. Virgin, KLM and AirAsia Malaysia also canceled several flights on Saturday and AirAsia canceled more than 30 flights on Sunday.

"We weren't notified by Jetstar in advance of us getting here (to Bali's airport)," said Australian tourist George Bennick. "So we are very disappointed about that."

Agung also had a minor eruption on Tuesday, but authorities have not raised its alert status from the second-highest level, which would widen the exclusion area and prompt a large evacuation of people.

About 25,000 people have been unable to return to their homes since September, when Agung showed signs of activity for the first time in more than half a century.

Indonesia sits on the "Pacific Ring of Fire" and has more than 120 active volcanoes.

Mount Agung's alert status was raised to the highest level in September following a dramatic increase in tremors from the volcano, which doubled the exclusion zone around the crater and prompted more than 140,000 people to leave the area. The alert was lowered on Oct. 29 after a decrease in activity.

Dog that was abandoned in airport dies from a 'broken heart'

Egypt reeling from attack on mosque in Sinai that killed 305