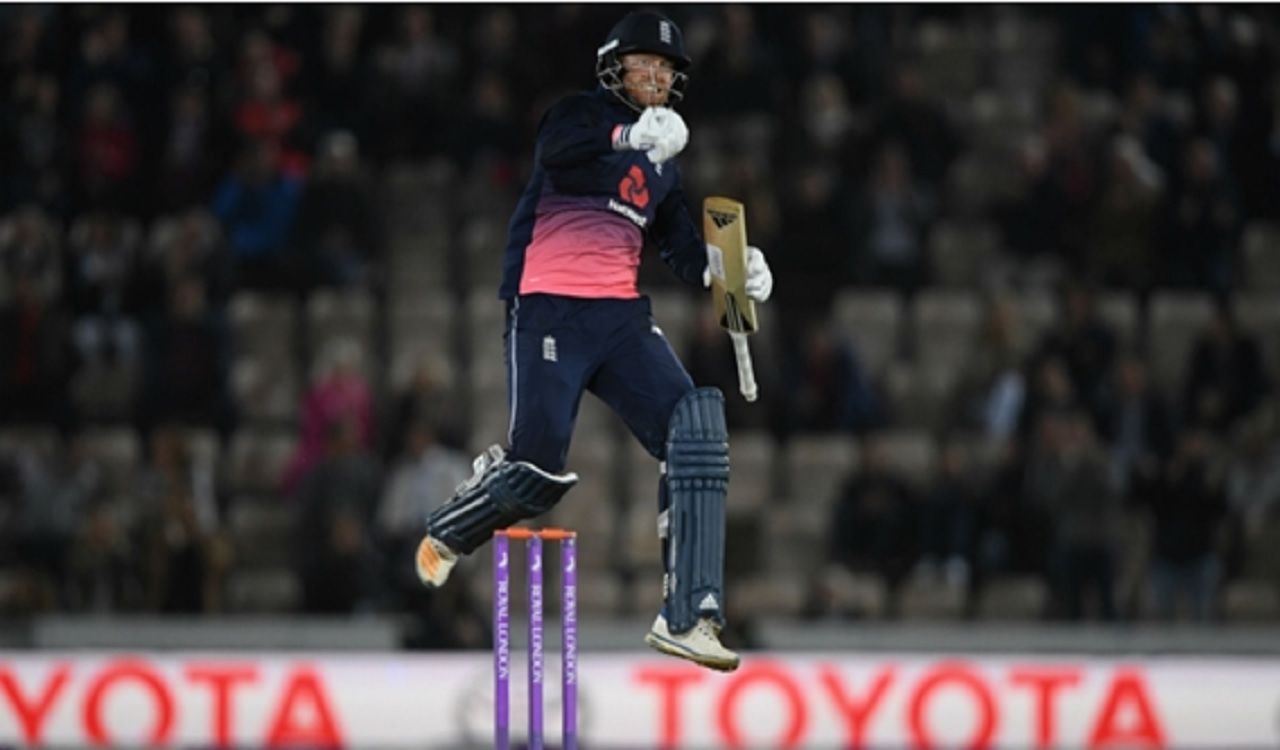 Jonny Bairstow celebrates his hundred at the Ageas Bowl

Jonny Bairstow and Jason Roy starred again as England rounded off their home international season with a thumping nine-wicket victory over a lacklustre West Indies side at the Ageas Bowl on Friday.

Stokes, who was initially taken into custody on suspicion of causing actual bodily harm following an incident in Bristol before being released under investigation without charge, and opener Alex Hales, with his team-mate at the time of the altercation, each missed the fourth ODI at The Oval and remained unavailable on Friday.

Both players have been suspended on full pay by the England and Wales Cricket Board (ECB) pending further investigations.

In the context of that ongoing saga, England's latest victory is unlikely to command too much attention, but Eoin Morgan's side can nevertheless take satisfaction from a hugely convincing win and a 4-0 series triumph.

The rejuvenated Roy, once more opening in place of Hales, followed up his 84 last time out with 96 from just 70 balls, while Bairstow cruised to his second hundred of the series to cement his position at the top of the order, finishing unbeaten on 141 from 114 deliveries alongside Joe Root (46 not out).

Having come so close to keeping the series alive in the rain-affected Oval ODI, West Indies were guilty of a dismal performance in the final match of their tour.

Chris Gayle (40) provided some early fireworks after his side had been put in to bat - the opener swiftly making up for a cautious start by clubbing a remarkable 34 runs from six Jake Ball deliveries.

However, the Windies struggled to regain any momentum after Gayle and Kyle Hope had fallen to superb catches from Liam Plunkett. A diving take running back from mid-off ended Gayle's fun and gave debutant Tom Curran a notable maiden ODI wicket, while Plunkett also pulled off a one-handed take off his own bowling to remove Hope for 33.

Marlon Samuels used up 60 balls in a sluggish innings of 32 that ended when he was stumped off Moeen Ali, while Shai Hope, who was dropped twice, went 77 balls without a boundary before eventually accelerating to 72 from 95 deliveries.

Spinners Moeen (1-36) and Adil Rashid (1-42) were chiefly responsible for restricting the Windies, who appeared short of a par score despite a late cameo from Ashley Nurse (31 not out from 12 balls) and some painful figures for Ball (1-94).

The inadequacy of West Indies' total was soon clear as Roy and Bairstow scored freely in an opening stand that yielded 30 runs more than the 126 they shared at The Oval.

Roy was agonisingly denied a ton when he fell lbw to Miguel Cummins, but Bairstow - who compiled his maiden ODI century at the start of this series - and Root added a further 138 in a hurry as England eased home with 12 overs to spare.