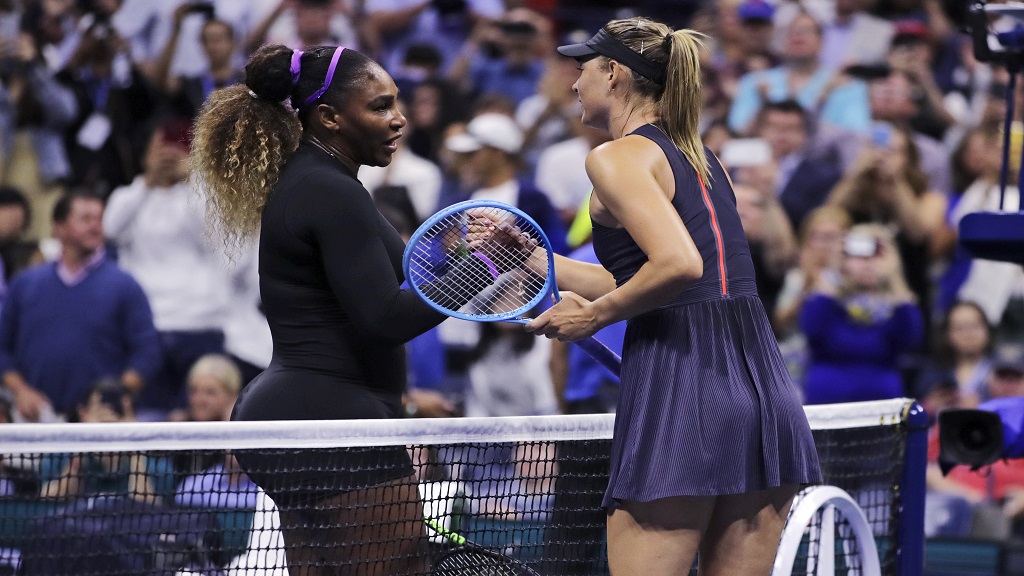 Serena Williams was not about to let Maria Sharapova make a match of this.

So facing a break point early in the second set, Williams conjured up a backhand passing shot so good, so powerful, so precise, that Sharapova had no chance to reach it. Williams watched the ball land, and then raised a clenched left fist toward the night sky.

In her first match at the U.S. Open since last year's loss in a chaotic, controversial final, Williams stretched her winning streak against Sharapova to 19 matches with a nearly flawless performance that produced a 6-1, 6-1 victory Monday.

Asked whether she could even imagine losing that many matches in a row across 15 years against one opponent, Williams paused for a moment, then replied: "Gosh, I never thought about it like that."

She now leads their head-to-head series 20-2.

"Every time I come up against her," Williams said, "I just bring out some of my best tennis."

Sure did this time; the whole thing lasted all of 59 minutes.

Williams won twice as many points, 56-28. She saved all five break points she faced and lashed serves at up to 115 mph. She broke five times.

"I always said her ball somehow lands in my strike zone," Williams said. "I don't know. It's just perfect for me."

Few players would have stood a chance against Williams the way she was hitting balls deep and true — and certainly not a diminished Sharapova, who is ranked 87th after missing much of this season with a bad right shoulder that needed surgery. This was a showdown fit for a final, at least in theory: These two met in a title match at each of the other three Grand Slam tournaments but never had faced each other in New York.

Williams arrived at Flushing Meadows, where she's won six titles, accompanied by questions about her back, because spasms that flared up this month forced her to stop playing during the final of one hard-court tuneup tournament and pull out of another one entirely.

Didn't seem to be an issue against Sharapova.

A year ago, she was beaten by Naomi Osaka in straight sets in a U.S. Open final that devolved after a back-and-forth between Williams and chair umpire Carlos Ramos. When Williams was asked Monday night what she thought of the U.S. Tennis Association's decision that Ramos would not officiate any match involving her or her older sister, Venus, at this year's tournament, this was the reply: "I don't know who that is."

LOL, as the kids say.

Williams was calm and cool as can be against Sharapova, only rarely showing the slightest hint of emotion with a cry of "Come on!" or the occasional fist pump, such as the one after the key backhand on break point.

It shaped up, at least, as far and away the most intriguing matchup on Day 1 at the year's last Grand Slam tournament.

Few athletes in any sport have been as popular in recent decades.

Both have a career Grand Slam.

Both have been ranked No. 1.

So, yes, there were plenty of other matches around the grounds Monday, with Roger Federer dropping his first set of the tournament against a qualifier ranked 190th before coming back to eliminate Sumit Nagal of India 4-6, 6-1, 6-2, 6-4, No. 1 Novak Djokovic opening defense of his title with a 6-4, 6-1, 6-4 victory over Roberto Carballes Baena, and 21-year-old American Reilly Opelka providing the biggest upset of the afternoon in his U.S. Open debut by eliminating No. 11 Fabio Fognini of Italy 6-3, 6-4, 6-7 (6), 6-3.

And, sure, 2016 champion Angelique Kerber continued her rough Grand Slam year with a first-round exit against Kristina Mladenovic by a 7-5, 0-6, 6-4 score, while 2016 runner-up Karolina Pliskova and reigning French Open title winner Ash Barty both struggled through rough starts before emerging.

The Williams family only dropped a total of three games in two matches Monday, because Venus beat Zheng Saisai 6-1, 6-0 earlier.

Nothing brought out the spectators the way Serena Williams vs. Maria Sharapova did, with full-throated roars greeting them when they walked from the locker room into a dimly lit stadium.

When the lights came on, Williams proved far more ready for prime time.

Only once before had Sharapova lost a night match in Arthur Ashe Stadium, going 22-1 until Monday.

Serena: I'll stop fighting for equality the day I'm in my grave