Back with Barcelona, Messi thrives again in 2-0 win 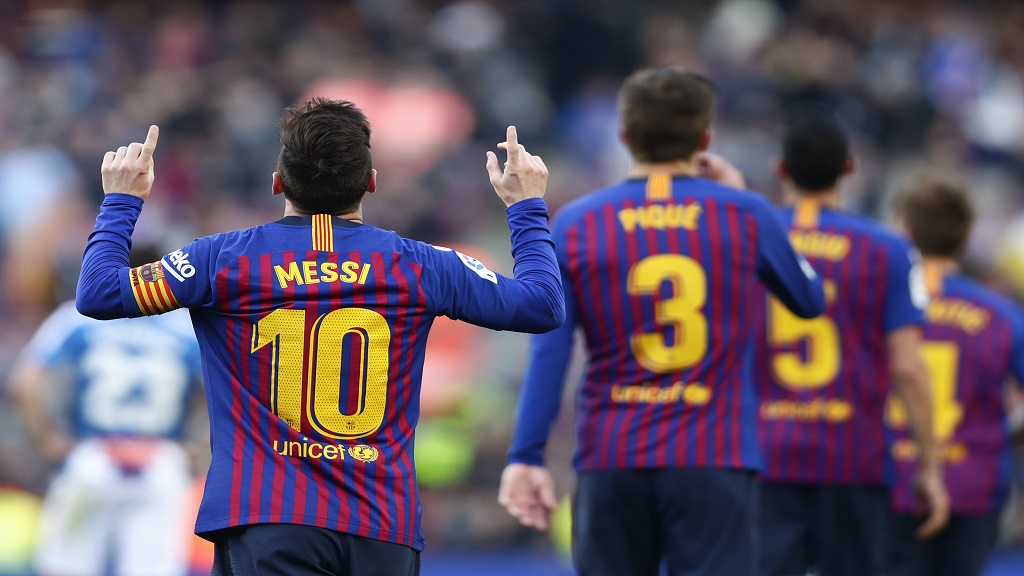 Lionel Messi picked up from where he left off before the international break, leading Barcelona to another Spanish league victory.

After struggling for Argentina yet again, Messi returned to Barcelona and thrived as usual, scoring twice in the team's 2-0 win over Espanyol in the Catalan derby on Saturday.

It was the 334th league win for Messi with Barcelona, tying him with former Real Madrid goalkeeper Iker Casillas for most all-time in the competition.

Messi opened the scoring with a free kick in the 71st and sealed the victory from inside the area in the 89th, leaving Barcelona 13 points in front of Atletico Madrid, which visits fifth-placed Alaves later.

Messi scored six goals in his last three matches with Barcelona before the international break, when he didn't do much to help Argentina in a 3-1 loss to Venezuela in a friendly last week. He later complained about the constant criticism against him in his homeland, saying even his six-year-old son asked why he was being attacked.

There were no complaints from the crowd at Camp Nou Stadium after another great performance by Messi, who leads the league scoring list with 31, 13 more than his closest competitor, teammate Luis Suarez.

"We all know what Messi can do and how important he is for us," Barcelona midfielder Sergio Busquets said. "We are used to seeing him deliver a lot for us."

Espanyol defender Victor Sanchez had a chance to clear Messi's left-footed free kick shot at the goal line but ended up heading the ball into his own net. Messi's second goal came with an easy low shot after a pass from substitute Malcom.

"Everyone should enjoy Messi while he is still playing," Espanyol coach Joan "Rubi" Ferrer said. "He is unique and will be missed when he is done playing."

It was the 12th straight win for Barcelona at home in the derby against Espanyol, which dropped to 14th. Barcelona hasn't lost or drawn a match against Espanyol at Camp Nou in nearly a decade. Its only loss to the rival since then was last year in an away game in the Copa del Rey.

Barcelona, the defending league champion, has not lost in the league since November.

Saturday's match attracted a lot of attention in China, with media there highlighting the first match of Chinese sensation Wu Lei against Messi.

Wu, who came off the bench in the 64th, has been the center of attention at Espanyol since being signed from Chinese club Shanghai SIPG in the winter transfer window. His jersey is the top-selling for Espanyol, which is owned by a Chinese businessman.

Wu is only the second Chinese to play in the Spanish league, and the first ever to score a goal. The other Chinese in Spain's first division was Zhang Chengdong, who played briefly for Rayo Vallecano in the 2015-16 season.

Getafe lost a chance to strengthen its grip on fourth place after losing to southern Madrid rival Leganes 2-0.

The result ended Getafe's seven-game winless streak and left it in danger of being surpassed by fifth-place Alaves, which hosts Atletico Madrid later on Saturday.

Michael Santos and Juanfran scored second-half goals for 11th-place Leganes, which had lost two in a row.

Another winning start for Solskjaer as Man U beat Watford