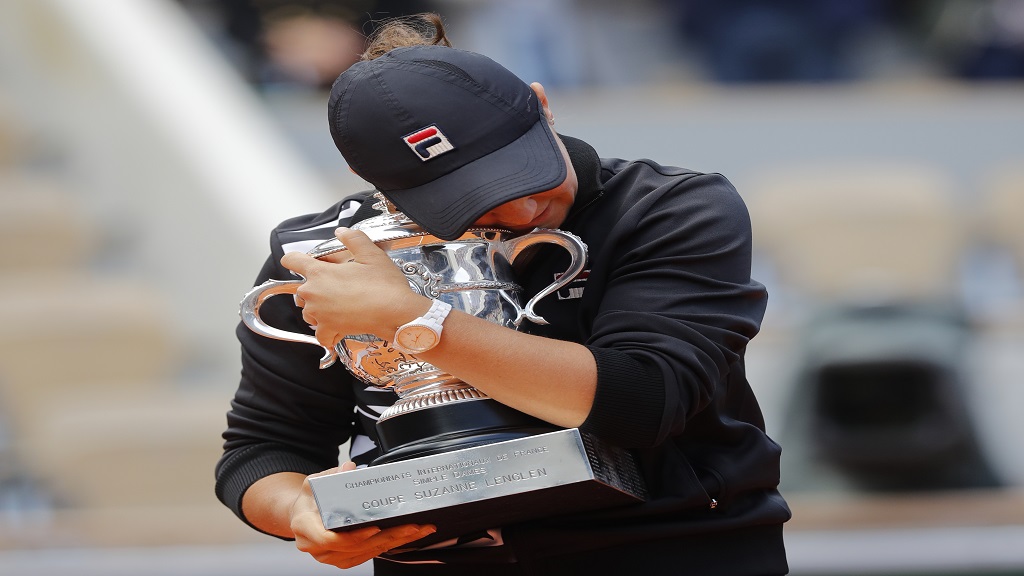 Australia's Ashleigh Barty holds the trophy as she celebrates winning her women's final match of the French Open tennis tournament against Marketa Vondrousova of the Czech Republic in two sets 6-1, 6-3, at the Roland Garros stadium in Paris, Saturday, June 8, 2019.

Ashleigh Barty decided to take a break from tennis in 2014 to play cricket. After almost two years away, the Australian returned to the tour, and that career choice paid off in a big way Saturday with her first Grand Slam title.

The No. 8-seeded Barty took control right at the start of the French Open final and never really let go, beating unseeded 19-year-old Marketa Vondrousova of the Czech Republic 6-1, 6-3.

Pretty close to it, particularly at the start.

She raced to a 4-0 lead and then held on, showing that she learned her lesson after blowing a 5-0 edge in the opening set of her quarterfinal victory a day earlier over another unseeded teenager, 17-year-old American Amanda Anisimova.

Barty wound up with a 27-10 edge in winners against a far shakier Vondrousova and became the first Australian to win the trophy at Roland Garros since Margaret Court in 1973.

"You gave me a lesson today," Vondrousova said to Barty during the trophy ceremony at Court Philippe Chatrier.

Neither Barty, 23, nor Vondrousova had ever played in a Grand Slam final before. Neither had even been in a major semifinal until this week, either.

Told during an on-court interview that she hadn't seemed jittery, Barty replied: "Oh, I was. Very nervous."

Barty hadn't even been past the fourth round in her first 17 Slam appearances before getting to the quarterfinals in front of a supportive home crowd at the Australian Open in January.

But she truly looked the part Saturday, with her formidable sliced backhand creating openings that she took advantage of with her topspin forehand, which produced 11 of her winners.

The women's final started about 1½ hours later than scheduled because it followed the resumption of Dominic Thiem's 6-2, 3-6, 7-5, 5-7, 7-5 victory over Novak Djokovic in the men's semifinals, a match suspended Friday evening because of rain.

After the U.S. Open five years ago, Barty walked away from professional tennis. She had been a successful junior, winning the 2011 Wimbledon girls' title, and played in three doubles finals by then, too.

But her time in cricket gave her a chance to reconsider how she wanted to approach her other sport, and she returned to the WTA in 2016.

"It's been a magical two weeks," Barty said.

Addressing her coach and others in her guest box Saturday, Barty said: "Thank you guys for sticking with me. It's been the most amazing journey we've been on the last three years. And I feel like it's just the start. Let's go celebrate tonight."

The 38th-ranked Vondrousova was playing in only her ninth major tournament and this was her first trip beyond the fourth round.

She hadn't dropped a set over the past two weeks, using a game filled with variety and every shot in the book, a style her semifinal opponent, Johanna Konta, called "tricky."

Wasn't too tricky for Barty.