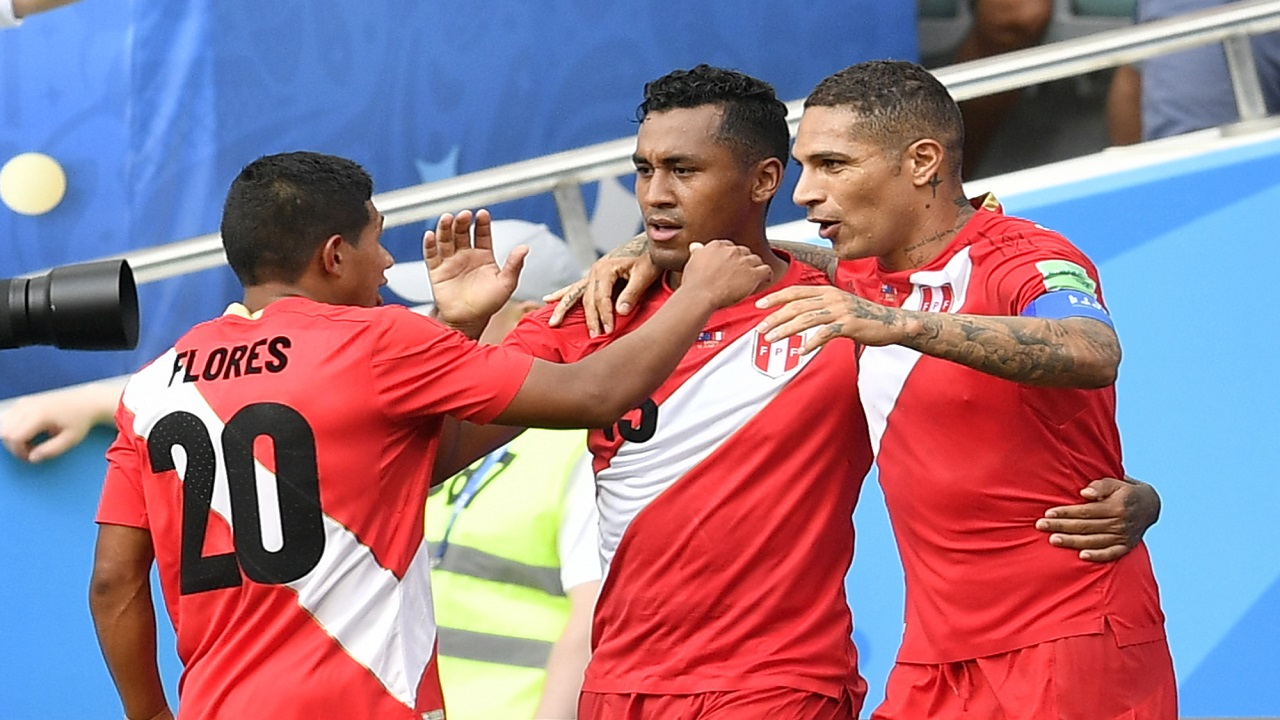 Back at the World Cup for the first time since 1982, Peru isn't leaving Russia empty handed.

The Peruvians failed to score a goal in their opening two matches, but the team finally gave its fans a reason to celebrate when it ended Australia's hopes of advancing to the knockout round with a 2-0 victory on Tuesday.

The Australians had to beat Peru and hope Denmark lost to France in the other Group C match, but neither result occurred. France and Denmark drew 0-0 in Moscow.

Andre Carrillo's 18th-minute goal — a half-volley from inside the area — was Peru's first in a World Cup since its last appearance 36 years ago. Peru hadn't won a World Cup match since defeating Iran in 1978.

Peru captain Paolo Guerrero, who almost missed the tournament because of a doping suspension, scored the other goal in the 50th with a left-footed strike after getting to a loose ball inside the area.

"This triumph is for our people and for Jefferson (Farfan)," Guerrero said of his teammate who missed the match after being hospitalized with a head injury sustained in practice last weekend. "We showed that Peru can play as equal to anyone."

Australia striker Tim Cahill, a 38-year-old veteran who entered the match in the 53rd minute, had a chance to become only the fifth player to score in four World Cups, joining Pele, Uwe Seeler, Miroslav Klose and Cristiano Ronaldo. But he had few chances.

Australia needed the victory to reach the round of 16 for the first time since 2006 but it had a slow start at Fisht Stadium, unable to get near the opposing area. The Peruvians, boosted by a loud crowd that heavily outnumbered the Aussies, took advantage of their chances and gave their team an honorable finish after two opening losses.

The whole squad saluted the boisterous Peruvian fans after the match, spending several moments near their sections in the stands.

Australia's best chance to score came in the 27th minute when Tom Rogic made a run through the Peru defense and had his shot saved by goalkeeper Pedro Gallese.

The victory allowed Peru to move into third place in the group, finishing with four points. The Australians ended up with one point after losing 2-1 to France and drawing 1-1 with Denmark.

Australia leaves consoled by decent performances even though it didn't get the points to show for it. It played relatively well in the opener against the French and had chances to get more than a draw against Denmark.

Peru had deserved more in its first two games, when it failed to capitalize on numerous scoring chances, including a missed penalty by Christian Cueva against Denmark.

It had been a long time before Peru had found the net in a World Cup. The last time was in its second match of the 1982 tournament, a 1-1 draw against Italy.

The team also scored in a 5-1 loss to Poland that year. It's last World Cup victory was a 4-1 result against Iran in the first round of the 1978 tournament in Argentina.

Scoring hasn't been easy for Australia at World Cups recently, with its last three goals in the tournament coming from penalty kicks, including two from captain Mile Jedinak in Russia.

Australia is only the second team in World Cup history to score three consecutive goals from the penalty spot. Ghana did it from 2006-2010.

Griezmann to face Peru despite ankle issue and struggles – Deschamps