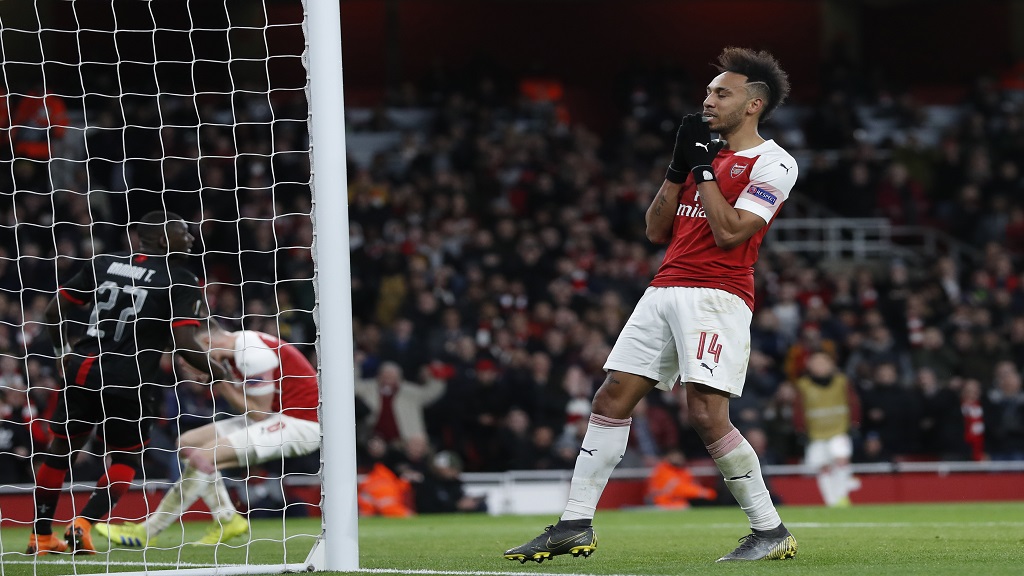 Arsenal's Pierre-Emerick Aubameyang, right, reacts after a missed scoring opportunity during the Europa League round of 16, 2nd leg, football match against Rennes at the Emirates stadium in London, Thursday, March 14, 2019.

Pierre-Emerick Aubameyang scored two goals and set up another as Arsenal overturned a two-goal deficit to reach the Europa League quarterfinals with a 3-0 home win over Rennes on Thursday, while Inter Milan was knocked out by Eintracht Frankfurt.

Aubameyang celebrated his second goal by pulling on a Black Panther mask he had placed behind the advertising boards, after coming to the rescue for an Arsenal side that lost the first leg 3-1 in France last week.

The Gunners erased that deficit in just 15 minutes, with Aubameyang scoring early and then setting up Ainsley Maitland-Niles for the second, before adding his second in the 72nd.

While Rennes was unable to protect its first-leg advantage, Frankfurt pulled off an upset by eliminating Inter thanks to a 1-0 home win.

Chelsea had the biggest victory as Olivier Giroud celebrated his 50th European game by scoring a hat trick in a 5-0 rout of Dynamo Kiev.

Giroud struck early in Kiev, added his second later in the first half and completed his hat trick in the second half for Chelsea to advance with a massive 8-0 win on aggregate.

Giroud was the third player this season to score three in Europe's second-tier competition.

Marcos Alonso and Callum Hudson-Odoi also had one apiece for Chelsea.

Valencia advanced thanks to an injury-time goal from substitute Goncalo Guedes that secured a 1-1 draw at Krasnodar and a 3-2 aggregate victory, while Villarreal eliminated Zenit St. Petersburg 5-2 on aggregate.

Here's a look at Thursday's action:

It was a flying start for Arsenal.

Aubameyang opened the scoring five minutes into the game after tapping in a cross from Aaron Ramsey. Just 10 minutes later, Aubameyang contributed again, this time crossing for Maitland-Niles to head in the second. However, replays showed that the striker was offside before delivering the cross.

Aubameyang sealed the win with another easy tap-in when he met Henrikh Mkhitaryan's cross, and immediately ran to grab his Black Panther mask before pulling it over his head. It was the latest superhero of choice for the Gabon international, who has previously pulled on Batman and Spider-Man masks after scoring while playing for Borussia Dortmund.

"In Gabon, we call the national team the Panthers of Gabon, so it represents me," Aubameyang said.

Giroud made sure Chelsea was in control from the start.

He netted in the fifth minute from close range after a corner kick from Willian landed right in front of him. The two were among the seven changes coach Maurizio Sarri made from a 1-1 draw with Wolverhampton in the Premier League on Sunday, a blow to Chelsea's hopes of making the top four Champions League qualification places.

To win the Europa League is another option to secure a spot in the Champions League for next season.

Sarri didn't have striker Gonzalo Higuain available because he had a fever after the weekend match and didn't travel to Ukraine.

But Giroud more than an adequate replacement.

He added his second in 33rd after Alonso set him up with a cross from the left. And in the last move of the first half, Giroud released Callum Hudson-Odoi free on the left to cross for Alonso who tapped in the third.

In the 59th, Giroud rose in the area to head in Willian's free kick from the right for his ninth goal in nine Europa League matches to top the scoring table.

Ahead of the game at the Olympic Stadium in Kiev, Sarri complained about the quality of the pitch, calling it dangerous for the players but UEFA said the problem was mainly aesthetic and posed no risks.

Napoli coach Carlo Ancelotti had to swallow his first loss in the Europa League after winning the previous three games, but it was still enough to advance.

Napoli striker Arkadiusz Milik opened the scoring with a volley 14 minutes into the game, putting the overall result beyond doubt. Milik also scored in the 3-0 victory in the first leg last week.

Munas Dabbur answered that one for Salzburg later in the first half for his eight. Substitutes Fredrik Gulbrandsen and Christoph Leitgeb completed the comeback in the second half.

In Milan, Lobbed Luka Jovic lobbed Inter goalkeeper Samir Handanovic early for Frankfurt to advance 1-0 on aggregate after the two played to a goalless draw in Frankfurt in the first leg.

Gerard Moreno and Carlos Bacca scored in each half to guide Villarreal to a 2-1 home win. Branislav Ivanovic got a consolation goal for the visitors.

After losing the first leg 2-1 in Spain, Krasnodar looked set to advance on the away goals rule after Magomed Suleymanov gave it a 1-0 lead five minutes from time. But Guedes secured a spot in the last eight for Valencia in the third minute of injury time.