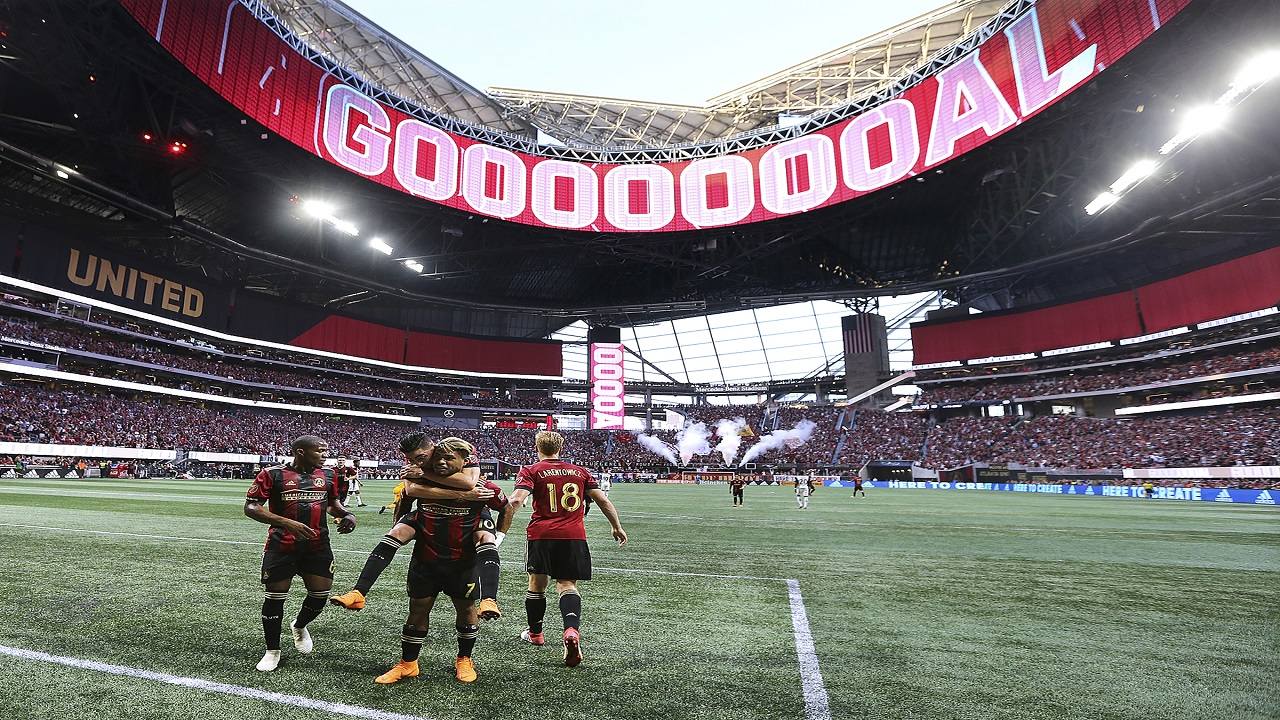 In this June 2, 2018, file photo, the roof of Mercedes-Benz Stadium is open as Atlanta United forward Josef Martinez celebrates his goal against the Philadelphia Union on a penalty kick during an MLS match in Atlanta. (Curtis Compton/Atlanta Journal-Constitution via AP, File)

Mercedes-Benz Stadium was shown off in the videos the North American bid officials played for FIFA voters Wednesday in Russia. The images were all shiny, new and impressive — from the stadium's retractable roof and huge oval video board to the all-important shots of sellout crowds for MLS Atlanta United.

"Based on the world-wide interest in the World Cup, I think it has the potential to have the same impact the Olympics did in '96 on our city," Harper said Wednesday. "I think it's fantastic."

In its second season, Atlanta United already has set three MLS single-game attendance records, most recently 72,035 for a March 11 win over D.C. United. The Atlanta home average of 48,200 for the 2017 season also set a record.

"You have one of the best stadiums in the world full of passionate soccer fans," Harper said.

The World Cup will return to the U.S. for the first time since 1994. It was an important win, especially with the U.S. left out of the 2018 World Cup field in Russia.

Mexico President Enrique Pena Nieto expressed pride his nation will be the first to host three World Cups, following 1970 and 1986.

Pena Nieto said FIFA's decision is a vote of confidence in Mexico and added "it is not only our people and our families, our companies and our businesspeople, soccer also knows that Canada, the United States and Mexico are deeply united."

Canadian Prime Minister Justin Trudeau used Twitter to offer congratulations "to everyone who worked hard on this bid — it's going to be a great tournament!"

Celebratory reactions on social media came from all quarters.

"Just woke up to the news that the 2026 World Cup is coming to North America!!!!!!!! Congrats to everyone who put in the tireless work to make it happen. How are we supposed to wait 8 more years?" Donovan said.

MLS Commissioner Don Garber described the winning bid as "a testament to how our three nations came together for an unprecedented united bid. It's a monumental step in our collective vision to further advance the game of soccer here and to do what we can to help grow the game around the world."

The Baltimore Ravens used their Twitter account to post a photo of M&T Bank Stadium "shining red, white and blue tonight as we support the World Cup United Bid. ... We hope to see a World Cup match in Baltimore!"

Washington Redskins cornerback Josh Norman was kicking a soccer ball following Wednesday's minicamp practice when he was told the World Cup is coming to the U.S.

"That is bananas," Norman said. "It's going to be here, so I won't have any problem going. I will be a part of that. I'm super-excited about it. Then again, I would love to travel internationally. But it's good that you don't have to go far. ... You're right in the middle of it."

Bengals defensive end Carlos Dunlap, who played soccer before he was allowed to play football as a child, said he has always wanted to experience the excitement of a World Cup.

"I've tossed it around many times, going over there to see World Cup because the energy they have at their games and stadiums for soccer is second to none — unless it's us against the Pittsburgh Steelers or the Florida Gators against Georgia in the Cocktail Party," said Dunlap, who attended Florida. "It rivals those."

The annual Florida-Georgia game in Jacksonville, Florida has been topped on the list of the state's top sporting events, according to Cole Stranahan, 14.

Stranahan, a native of Orlando, Florida who was visiting Atlanta with family members on Wednesday, said the rise of soccer in his state will be boosted by the World Cup.

"When I was born in Orlando soccer was hardly even a thing in Florida," Stranahan said. "Now in Orlando it's the main sport even ahead of basketball. Having a new team has really helped. But it's just getting the World Cup here in North America is showing how it's growing in the region."