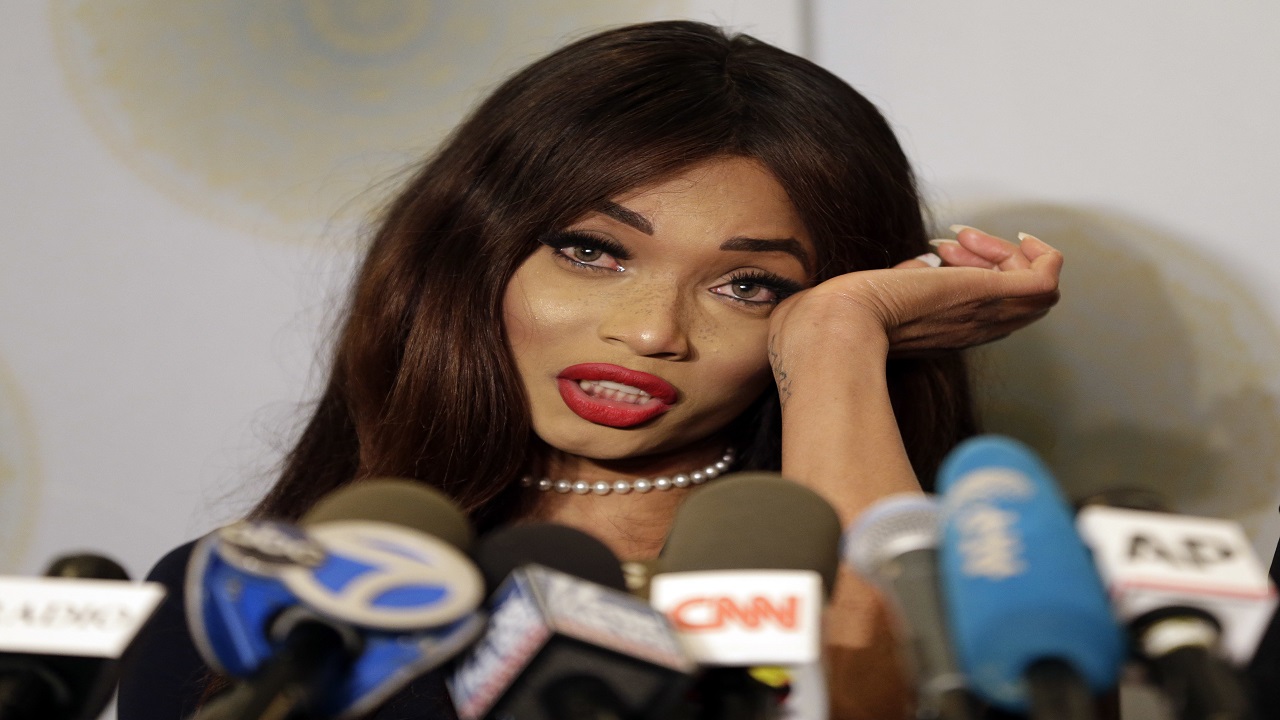 Kadian Noble cries as she recounts a sexual assault by Harvey Weinstein during a news conference in New York, Tuesday, Nov. 28, 2017.

An aspiring actress who met Harvey Weinstein by chance in 2014 detailed in tears Tuesday how she said the media mogul made her stand in front of a mirror in his hotel room in Cannes, France, while he stood behind her, groping her and forcing her to perform a sex act after pretending to be interested in her career.

Kadian Noble, 31, filed a lawsuit in federal court in Manhattan a day earlier. Her attorney Jeff Herman said he sued under a criminal sex trafficking statute of engaging in commercial sex act overseas because Weinstein is a U.S. citizen who coerced Noble under the guise of helping with her career.

"By offering Kadian help with her career, and then getting her to comply with his advances — that's the quid pro quo," Herman said. The lawsuit seeks unspecified damages.

A spokeswoman for Weinstein said he "denies allegations of non-consensual sex" and "has further confirmed that there were never any acts of retaliation against any women for refusing his advances."

Noble detailed the incident to reporters, saying that she met Weinstein by chance in 2014 at an after-party for the British Academy Film Awards, where he introduced her to Oprah Winfrey and Naomi Campbell, and she felt dazzled and lucky when he said he was interested in her.

He told her to contact an assistant and send them a demo reel. Later that year, he approached her in a hotel lobby at Cannes, which flattered her, and he suggested they look at her reel in his hotel room, she said. But when she got up there, it slowly dawned on her he was after something else.

"He was repeating to me, 'I need to know that you really like me,'" she said. "At this point it became a little bit confusing but still I had a lot of hope."

He grabbed her arm and stood her in front of a mirror where he groped her and then forced her to perform a sex act, she said.

"And I kept saying no, and I just felt so stupid. But at the same time a massive part of me had shut down. It makes no sense that I didn't run out of the room. And all I was able to do was just say no."

She said after the incident, his assistants never got back to her. Eventually she detailed the assault to one, who tried to convince her that he was a "good guy."

The worst part for Noble, she said, is it ruined her dream of becoming an actress. She felt like her career was going to take off after meeting him — but it was all a lie, she said.

"People believe in you," she said, addressing Weinstein. "It's not been fair that you've used the power, the gift you have, you've turned it into such a corruption."

Noble, who lives in London, said she reported details of the crime to the NYPD in recent weeks, which is investigating claims against Weinstein. In recent months, the scandal has widened to include allegations made by at least 75 other actresses, models and others. New York police have been investigating a 2010 rape allegation that could result in criminal charges.

Another civil lawsuit was filed Monday in London by a different woman who was not identified. Her attorney Jill Greenfield says her client was seeking damages for "personal injury" plus expenses and "consequential loss" arising out of a series of sexual assaults by Weinstein. Civil claims for rape and sexual assault are uncommon in Britain.