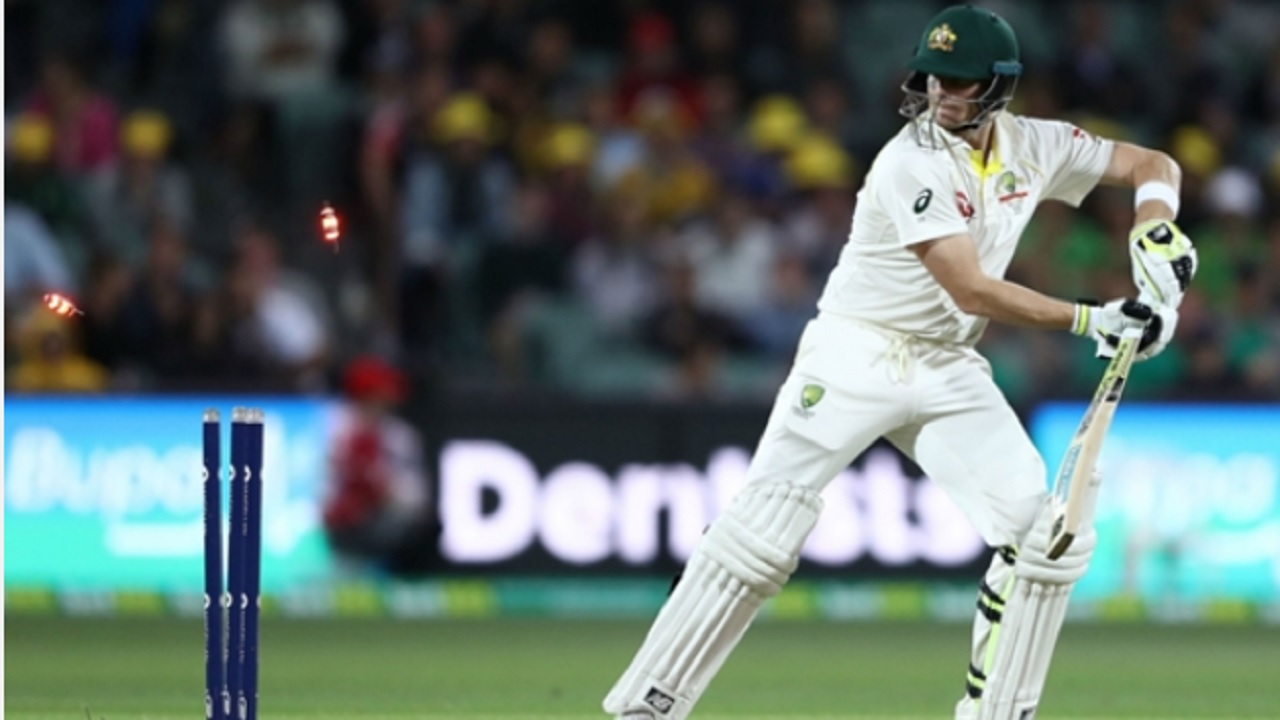 Steve Smith is bowled by Craig Overton in Adelaide.

Debutant Craig Overton was the man to remove Steve Smith as the Australia captain faltered for the first time in this Ashes series on day one of the day-night Test in Adelaide.

Somerset bowler Overton replaced Jake Ball to make his Test debut and took a memorable maiden scalp as Australia closed at 209-4 on a slow-scoring day of toil for both sides.

Smith's unbeaten 141 in Brisbane was the crucial contribution in putting the hosts one up in the series and his opposite number Joe Root shocked Adelaide Oval by opting to bowl first after winning the toss - a first in day-night Tests.

The lateral movement Root might have hoped for was not as forthcoming in a sluggish and rain-affected start to Saturday's action and only a mix-up between David Warner and Cameron Bancroft allowed Chris Woakes to run out the latter early in the middle session.

Woakes was in the thick of it as he removed Warner and had Usman Khawaja dropped before Australia's number three went on to make a fifty.

England fought back under the lights, however, ousting Khawaja and then finally finding the combination to unlock Smith's defences for 40, although an edgy Peter Handscomb (36 not out) and Shaun Marsh (20 not out) scrapped their way to stumps.

Root's decision at the toss raised eyebrows and drew comparisons with an altogether more calamitous bowl-first decision by Nasser Hussain in Brisbane 15 years ago and England's short-pitched tactics did not help in a first session limited to 13.5 overs.

Thanks mostly to Jonny Bairstow, farce followed Bancroft (10) in the aftermath of his maiden Test fifty, and his dismissal here was no less comical as he was left stranded halfway down the track when Moeen Ali fumbled Warner's defensive block straight to Woakes, who took a moment to compose himself and successfully shied at the stumps.

Overton was effectively hit back out of the attack after his opening spell in Test cricket and Khawaja, a centurion here facing the pink ball against South Africa last year, interrupted his off-spin woes when he hit Moeen for two fours in an over to take the partnership beyond 50.

However, England's labour was finally rewarded as Woakes cramped Warner to entice an edge behind three runs from a half-century and the same bowler ought to have had Khawaja when hooking to deep-backward square, only for Mark Stoneman to spill a stooping chance.

Khawaja slashed Moeen through third man to reach his ninth Test half-century, but he was gone four deliveries after dinner, loosely driving Anderson to James Vince at third slip on 53.

With Handscomb struggling at the other end, England sensed a chance to get at Smith, Anderson placed at short mid-on - handily right beside the Australia captain - in a position that looked more useful for chatting than catching.

Whether the talk had an impact or not, Smith's dismissal was ugly from an Australian viewpoint, the captain playing well away from his body as Overton got an off-cutter to nip in the gap and bowl him via a flick off the pad.

It was the first time Smith had been bowled on home soil in over two years (just the fifth overall) and England were visibly boosted by removing the dangerman.

Handscomb and Marsh offered few chances, but rarely looked comfortable as Anderson and Stuart Broad examined their techniques late on to no avail, with Root's decision to take the new ball ahead of the final over of the day doing little to prise the pair out.