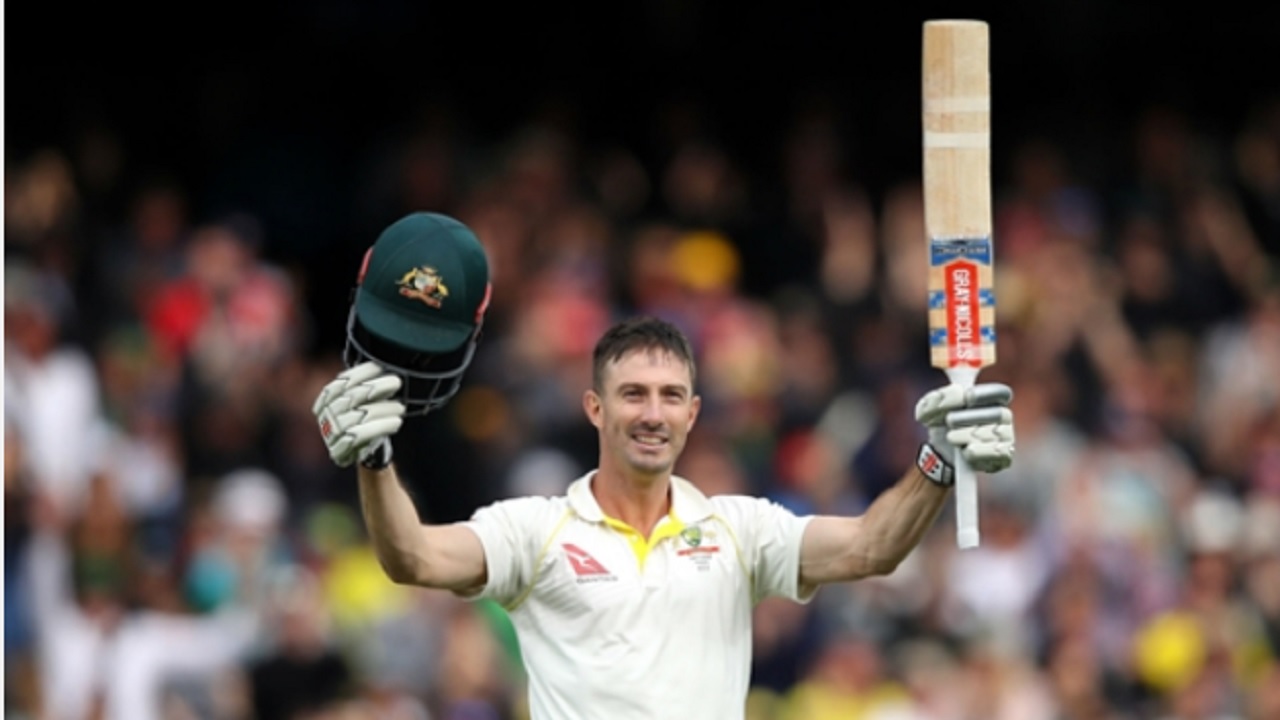 Shaun Marsh celebrates his Ashes ton against England in Adelaide.

Shaun Marsh hit his fifth Test century as Australia ground down England's bowlers in Adelaide before their top order was put on the rack under the lights.

Marsh vindicated his surprise selection in fine fashion, hitting an unbeaten 126 as Australia posted 442-8 declared in their first innings in the maiden Ashes day-night Test.

Captain Steve Smith had seen enough after Marsh blasted a beleaguered Stuart Broad back over his head for six, as the light began to fade at Adelaide Oval.

England had failed to threaten in Saturday's evening session after Joe Root inserted the hosts, but Mitchell Starc and Josh Hazlewood were an altogether more fearsome combination and ended Sunday's play well on top, removing Mark Stoneman (18) as England clawed their way to 29-1 before rain brought a premature end to their examination.

But the day belonged to Marsh, ably assisted by Tim Paine (57) and Pat Cummins (44), with England now facing a mammoth task to avoid going 2-0 down in the series.

Root's decision at the toss will be analysed in the post-mortem of this contest, but England followed a tight first day in brilliant fashion, Broad trapping Peter Handscomb (36) with the third ball of the first session to reduce the hosts to 209-5.

England were unable to maintain momentum, however, and their frustrations were deepened when James Anderson trapped both Marsh and Paine in front, on 29 and 24 respectively - both times umpire Chris Gaffaney raised the finger, both times the batsmen successfully reviewed.

Another man out to prove his worth, Paine eventually fell on the hook to Craig Overton (3-105) and Starc (6) could not hang around, but Cummins followed a fine knock at Brisbane with a Test-best performance alongside Marsh.

Cummins was scoreless off 36 deliveries, but took 40 runs from his next 44 faced as he and Marsh added a crucial 99 for the eighth wicket to demoralise England further, and their travails were neatly summed up just before dinner when Chris Woakes induced an edge from Marsh, only for Alastair Cook and James Vince to collide with each other and waste the chance.

Marsh brought up a fifth Test ton by pulling the listless Woakes for four, but Overton bounced out Cummins after dinner as Australia lost a wicket directly following a break for the fifth time in the innings.

It only allowed Marsh to go into attack mode and Broad was taken for 15 runs in the final over before Smith called them in.

Starc's 90mph opening delivery was quicker than anything England had managed in almost 150 overs and the left-armer swiftly tucked into Stoneman, squaring him up for a flash over gully before delivering a trademark fuller ball that trapped the opener in front - Stoneman's half-hearted DRS review only showing that leg stump would have been splintered.

Vince (0 not out) and Cook (11 not out) will hope their earlier moment of fielding farce is not a sign of things to come at the crease and England's chances may rest in the former captain's ability to replicate the kind of performance which helped him score 243 off the pink ball against West Indies in August.