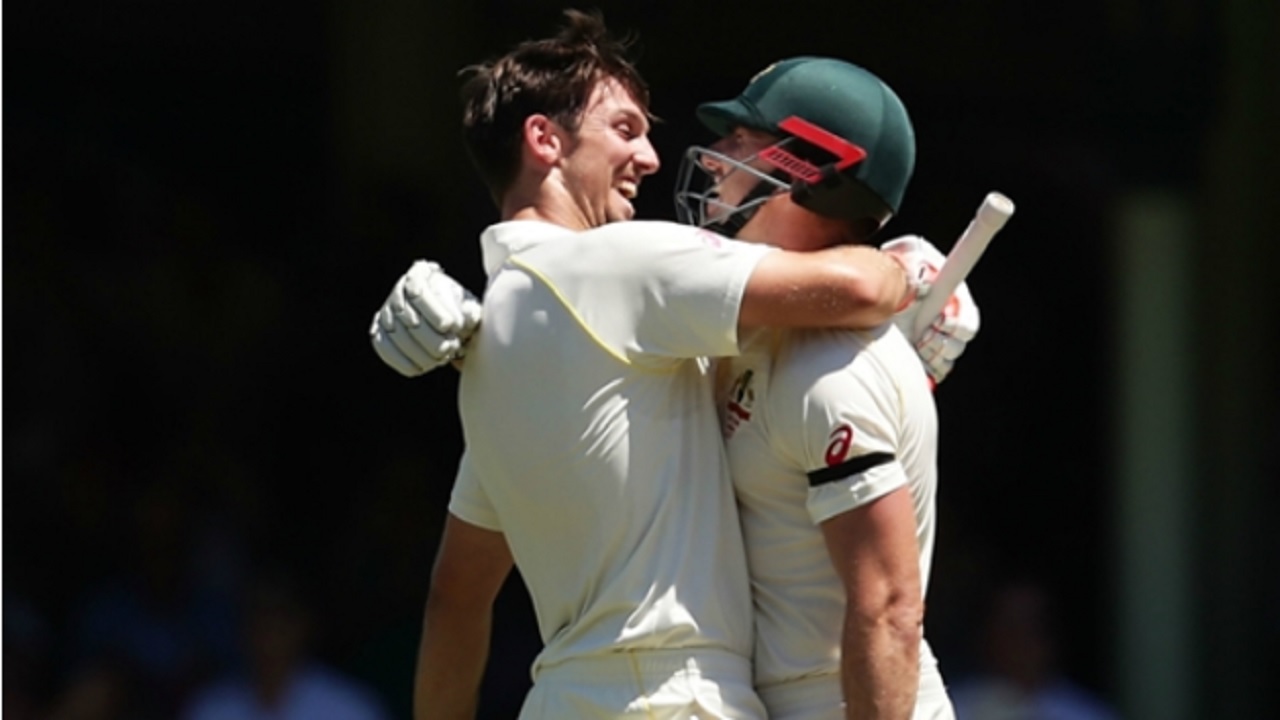 Brothers Shaun and Mitchell Marsh of Australia celebrate centuries in the fifth Ashes Test against England in Sydney.

Australia are poised to close out the Ashes series with a huge victory after the Marsh brothers made centuries before England lost four wickets in the scorching Sydney heat on day four of the fifth and final Test.

England were lifeless and zapped of energy throughout the penultimate day, having already surrendered the urn, as Australia posted 649-7 – earning a lead of 303 thanks to memorable hundreds from Shaun and Mitchell Marsh – before Steve Smith declared post-lunch.

Nathan Lyon, Mitchell Starc and Pat Cummins then wreaked havoc as the temperature exceeded 41 degrees Celsius on Sunday – and staggeringly 56 out in the middle – with the embattled tourists stumbling to stumps at 93-4, still needing 210 runs to make the Aussies bat again.

Alastair Cook (10) became the sixth player to bring up his 12,000th Test run but he fell to Lyon (2-31) after Starc trapped Mark Stoneman leg before without scoring, with James Vince and Dawid Malan also failing.

Joe Root took a nasty blow to the finger but was unbeaten on 42 at stumps and Jonny Bairstow (17 not out) also prevented further damage from being done on another punishing day for England.

Cook was given a warm ovation after reaching yet another milestone, but was cleaned up by Lyon after Stoneman was done for pace by Starc in a horror start to England’s second innings.

England breathed a sigh of relief when Vince's decision to review was successful on 15 – DRS showing the bat only hit the ground after he had been adjudged to have edged Lyon's delivery through to Tim Paine.

But there were no doubts about Vince's (18) dismissal in the next over when Steve Smith gobbled up the catch at the second attempt at slip off Cummins' (1-12) bowling, and Malan (5) soon followed after being trapped lbw by Lyon.

The selections of Shaun and Mitchell for the Ashes were met with widespread criticism following their previous struggles at Test level. However, the siblings further silenced the doubters with their second hundreds in the series as Australia reached lunch at 578-5, a lead of 232 runs, after resuming on 479-4.

Shaun Marsh was 98 not out when he returned and the 34-year-old – who produced an unbeaten 126-run knock in Adelaide – only needed five balls to bring up his sixth Test hundred, hitting a boundary off Moeen Ali (2-170) much to the delight of brother Mitchell and the crowd.

England paceman James Anderson (1-56) toiled tirelessly without luck after two decent lbw shouts were turned down, while Mason Crane (1-193) finished with the worst figures for an English debutant and the fifth-worst from any nation.

Mitchell Marsh, who was 63 not out at the start of the day, joined his brother in celebrating a century an hour later – the duo sharing another emotional embrace in the middle.

However, Mitchell Marsh's joy was short-lived after he was bowled by Tom Curran (1-82) the next ball with a seaming delivery which knocked over the off stump.

Shaun Marsh added 15 runs to his score post-lunch before he was run out by Stoneman for 156.

Starc (11) came out swinging and he was sent back to the pavilion in the same way as he tried to smash Moeen for six, caught easily by Vince, while Paine (38 not out) and Cummins (24 not out) added further runs as Australia posted their third-highest innings score in an Ashes Test on home soil.