THE ASHES: Australia land double blow late on day one in Sydney 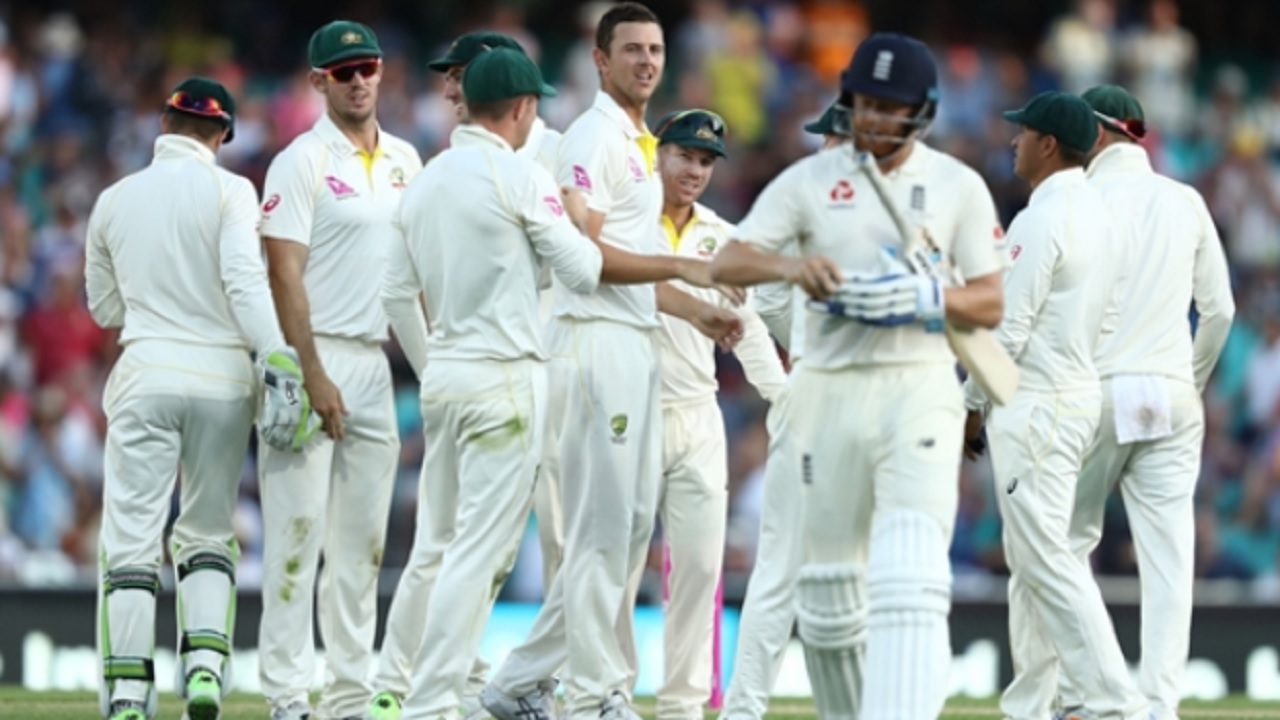 Australia landed two huge late blows after England had dominated day one of the fifth Ashes Test in Sydney.

After the tourists – who have already lost the series – appeared in control at the SCG, Australia struck with the wickets of Joe Root (83) and Jonny Bairstow (5) late on Thursday.

England were 228-3 but finished the day at 233-5 after the second new ball brought the massive late wickets of two experienced batsmen.

Dawid Malan (55) was unbeaten at stumps, having put on a 133-run partnership with Root, who is still without a ton in the series despite four half-centuries.

Pat Cummins (2-44) made two breakthroughs and Josh Hazlewood (2-47) and Nathan Lyon (0-61) looked dangerous, while the returning Mitchell Starc (1-63) struggled to find his best as he reportedly battled a calf injury, although he did manage to remove Root.

Rain saw the start of play delayed as an early lunch was called without a ball being bowled in the opening session, with Root winning the toss and opting to bat.

While there was some early movement for the pacemen, Root's decision to bat first looked a good one.

However, England were in danger of missing an opportunity as the top-order failed to capitalise on starts.

Mark Stoneman made a run-a-ball 24 before being undone by a short ball from Cummins, the opener edging through to wicketkeeper Tim Paine.

James Vince (25) wasted another start when he chased and edged a wide one from Cummins after putting on a 60-run partnership with Alastair Cook.

Cook (39) also fell as he was trapped lbw by Hazlewood, although Australia needed a review to get the big wicket of the opener, who made an unbeaten double century in the drawn fourth Test.

While Root looked comfortable, Malan struggled to get going and the two were involved in a huge mix-up with England 168-3.

But Mitchell Marsh threw to the wrong end and Paine's subsequent attempt was off target as the duo escaped.

After Root passed 50, Malan gave Australia another chance on 34, but Smith dropped a tough catch at slip off Lyon.

Malan and Root pushed England into control, but the second new ball brought wickets for Australia, the latter flicking Starc to Mitchell Marsh at square leg as he again fell short of a first century of the series.

The hosts wasted a late review on a not-out lbw decision against Bairstow, who then pushed at a Hazlewood delivery and was out caught behind off what proved to be the final ball of the day.

Grenada PM: Region must be prepared for Covid-19