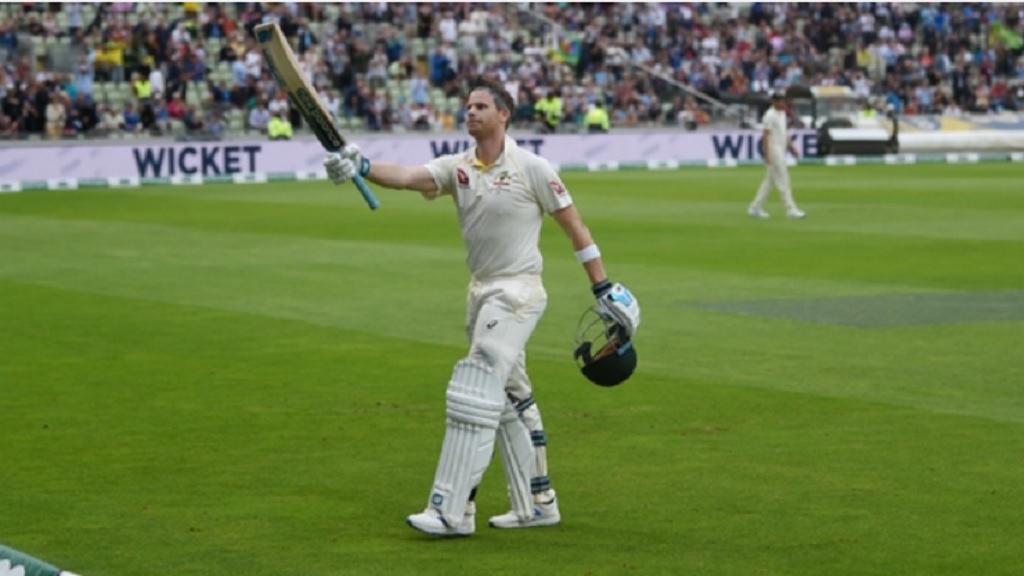 Steve Smith scored arguably the finest century of his Test career to rescue Australia from the brink of collapse in the first Ashes Test against England side facing an anxious wait to learn the extent of an injury to James Anderson.

Having won the toss and opted to bat, Australia twice looked in deep trouble despite England only being able to get four overs out of leading Test wicket-taker Anderson, who was sent for a scan due to "tightness" in his calf.

Australia were reduced to 35-3 and then 122-8, but on each occasion former captain Smith performed a rebuilding job and was rewarded for anchoring the innings with a hundred on his first Test appearance since serving a 12-month ban.

He thrived amid the predictable boos that greeted him, David Warner and Cameron Bancroft following their suspensions for ball-tampering in the South Africa series last year and, having successfully reviewed an lbw decision on 34, racked up 144 to guide Australia to 284 before Stuart Broad bowled him to claim his fifth wicket and 100th in Ashes cricket.

England survived two overs without loss before the close, reaching stumps on 10-0.

Australia won the toss and opted to bat, a decision that looked questionable as the first three wickets fell in short order. Warner, having been incorrectly given not out caught behind, went in the fourth over lbw to Broad.

HawkEye showed the ball would have missed the stumps, setting the tone for a day when umpire errors were commonplace before Bancroft edged the same man to first slip.

England successfully reviewed and had Usman Khawaja caught behind for 13, but Smith – in a stand of 64 with Travis Head – mounted his first recovery effort of the day as Australia reached lunch without further damage.

Chris Woakes trapped Head in front in the sixth over after the restart, with an aghast Smith correctly given a reprieve in the following over after initially being ruled out not playing a shot.

A sub-200 total looked on the cards but Smith, aided by a battling 44 from Peter Siddle, managed the situation brilliantly, farming the strike and peppering the boundary as the depleted England attack tired.

Siddle, who put on 88 with Smith, fell to Moeen Ali but the ex-skipper added another 74 with Lyon, an innings that comprised 16 fours and two sixes eventually ended by a visibly frustrated Broad before Rory Burns and Jason Roy staved off 12 balls.

England appeared poised to bowl Australia out for a meagre total without their star man, but as they struggled to find a way through Smith's incredible defences, the impact of the absence of perhaps the greatest exponent of swing bowling could not have been more obvious.

Smith looked utterly indignant as he reviewed Aleem Dar's decision to give him out lbw and his facial expression probably summed up the overall attitude to the performance of the two umpires. They made seven errors in a performance not fitting of the most famous series in cricket.

A day that seemed set to belong to England's bowlers ended up belonging to Smith. Though there were some boos as he reached his century with a wondrous cover drive, the majority of those inside Edgbaston rose to applaud a memorable Ashes innings, with Smith raising his arms as he soaked in the acclaim.

- Matthew Wade has been out lbw in each of his last four Test innings.

- Steve Smith has claimed a century in five of his last seven Ashes Tests.

- Stuart Broad brought up 100 Test wickets against Australia, becoming only the ninth man to do so for England.

- Steve Smith has a first-innings Test average of 79 for Australia.