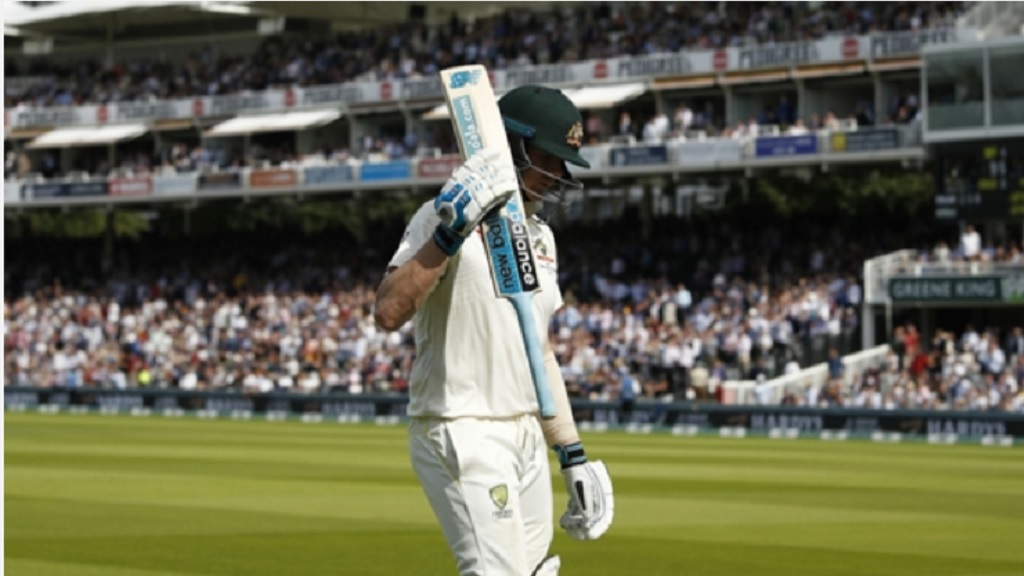 Steve Smith takes in the applause at Lord's.

Steve Smith braved a ferocious spell and a sickening blow from Jofra Archer to put Australia in a strong position heading into the final day of the second Ashes Test at Lord's.

Smith was unable to make it three centuries from as many innings in the series but the circumstances of this knock mean it might arguably live longer in the memory.

Once again anchoring the Australia innings and bringing up his half-century after Matthew Wade edged the in-form Stuart Broad (4-65) to slip, Smith was subjected to a brutal going over from Test debutant Archer (2-59).

He needed padding and a bandage after the paceman whacked him on the left forearm before Lord's held its breath when a bouncer speared into Smith's neck and left him prone on the turf.

Australia's talisman left the field as a precaution but returned to fall for 92 in 250 all out, eight shy of England's first innings total.

Burns pouching Wade for six in the morning session underlined the impression Smith was playing a different game to the rest of his colleagues in the Australian order, although his successor as captain Tim Paine (23) provided able support in a stand of 60 for the sixth wicket.

Paine fell to a short-leg catch by Jos Buttler off Archer, setting the stage for day four's exhilarating and frightening centrepiece.

Smith dropped the ball just short of Buttler from a delivery that clocked a remarkable 96.1 mph and he misjudged another vicious bouncer in Archer's next over to cause instant concern.

The medical advice to leave the fray appeared to displease Smith but he was back after Peter Siddle edged Chris Woakes (3-61) behind - the England all-rounder trapping Australia's main man in front after three more defiant boundaries.

Pat Cummins added a useful 20 and promptly got among England.

Roy's ordeal at the top of the order continued as he shovelled back a return catch before Root feathered a beauty behind first ball.

The hosts were reeling on 9-2 at that stage, leaving Burns and Denly to rebuild while riding their luck – both in terms of Australia's laxed review policy and David Warner's uncertain evening in the cordon.

Siddle took matters into his own hands with a return catch to claim the deserved scalp of Denly before having Burns caught behind.

Ben Stokes – afforded further lives by the errant Warner – and Jos Buttler did not always convince but were unbeaten on 16 and 10 respectively when rain brought a slightly early close.

Warner's toils with the bat at the hands of Broad so far in the series transferred to some shoddy work at slip as England tottered. Twice Paine failed to call for reviews that would have seen Nathan Lyon dismiss Burns and Stokes lbw. Both factors could prove costly in the final analysis of a rain-affected and low-scoring encounter.

Where England's World Cup heroes have largely failed to fire with the bat since white ball switched to red, Archer left no doubt over his credentials with a spell for the ages. The rangy speedster taking on Smith truly was an "I was there" moment for all in attendance.

After the thrill and concern of his joust with Jofra, there was a gladiatorial quality to Smith returning to the fray.

- Siddle needs two more wickets for 50 in Tests against England. The seamer has had four catches dropped off his bowling in this series.
- Root's duck was his first in Ashes Tests.
- Smith was out lbw for the third time in his past eight innings against England, although this was his seventh consecutive score above 50 in the Ashes.
- Before being dismissed for six, Wade brought up 1,000 runs in Tests.