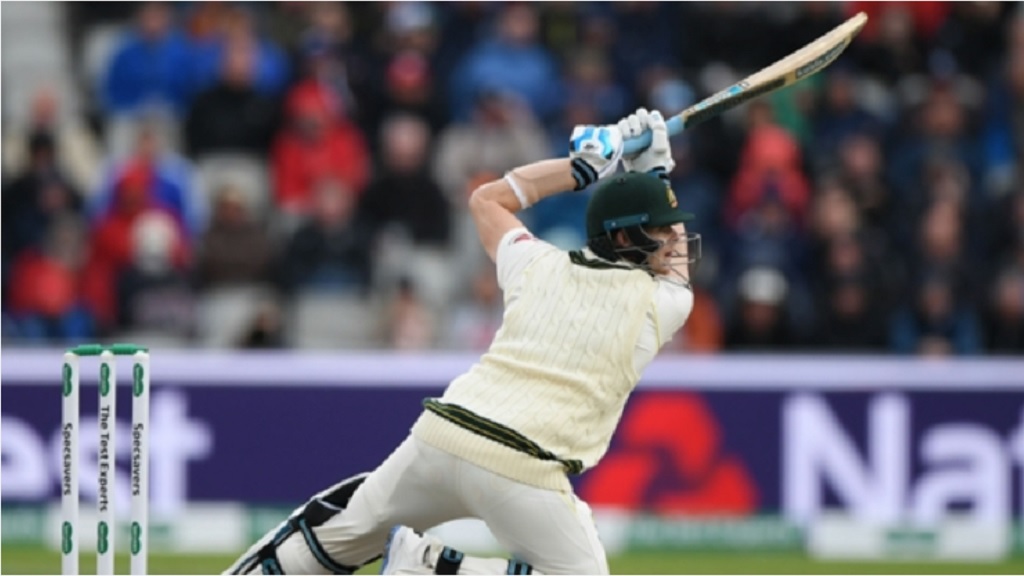 Craig Overton removed Marnus Labuschagne to end a century stand but Steve Smith was still there with Australia on top when stumps were called due to rain on a gloomy day one of the fourth Ashes Test at Old Trafford.

England paceman Stuart Broad dismissed David Warner without scoring - the fifth time he has snared the opener in a series which is level at 1-1 - before reducing the tourists to 28-2 by removing Marcus Harris.

Labuschagne (67) and Smith (60 not out) then showed why Tim Paine chose to bat on a flat pitch by putting on 116 for the third wicket on a cold, wet and windy day that saw only 44 overs bowled.

The composed Labuschagne made a fourth successive half-century since coming in as concussion replacement for Smith at Lord's, but Overton - picked ahead of Chris Woakes - dismissed him to leave Australia 170-3 when rain brought play to an early end.

Normal service was resumed by Smith after he missed England's dramatic win at Headingley due to the impact of a nasty blow from a Jofra Archer bouncer in the second Test in London as the former captain looked totally untroubled.

The out-of-sorts Warner fell in the first over, edging Broad to Jonny Bairstow when he failed to pull his bat away in time attempting a late leave.

Harris fell leg before for only 13 as the excellent Broad (2-35) built up a head of steam.

There was relief for Labuschagne when he was given not out after being done for pace by Headingley hero Ben Stokes, with England's review for leg before unsuccessful as the decision remained with the umpire's call.

Play continued without bails due to the wild conditions when the afternoon session finally got under way following a lengthy delay, with several stoppages as litter and beach balls blew across the pitch.

Labuschagne reached another superb half-century but was on his way when he was bowled by a beauty from Overton after Smith had gone to 50 with a drive that left him on his knees.

England lost a review when a ball from Stokes struck Travis Head outside leg stump and no further action was possible after the players went off for a late tea.

It looked as though this might be a day to remember for Broad and England when the bowler began by again getting the better of Warner and then adding the scalp of Harris.

That brought in Smith to resume the battle everyone had been waiting for with Archer, yet the England star, who has enjoyed an outstanding start to his career in the longest format, could not find the same pace or length as in previous Tests as the batsmen swatted away his threat.

Broad had at least looked in good nick but the adverse weather conditions appeared to take their toll, with the wind hindering his deliveries and even blowing the bails across the pitch to his increasing frustration.

Labuschagne may not have got his Ashes chance in 2019 had Smith not suffered a concussion in the second Test, but Australia appear to have tripped across a hugely effective partnership.

The decision to drop Usman Khawaja looks to have been justified already, with England continuing to enjoy themselves against the tourists' openers but finding a resolute duo at three and four.

Smith was going through his full repertoire of exaggerated leaves by the afternoon as Labuschagne dug in at the other end in another impressive outing until Overton's breakthrough.

Smith came out looking to make a statement and headed down the track in the direction of Archer after driving the quick through the off side for four.

- Labuschagne and Smith were batting together for the first time in Test cricket as they put on 116 for the third wicket.
- Smith has managed eight consecutive scores of 50 or more against England in Test cricket.
- Broad is now outright third in the list of most Test wickets for England against Australia (Ian Botham 148, Bob Willis 128 and Broad 110).
- The England bowler (16) is now just one wicket behind series leader Pat Cummins (17). Five have come against Warner.
- Warner is averaging 11.3 in this series (seven innings); his lowest rate ever in a Test series.