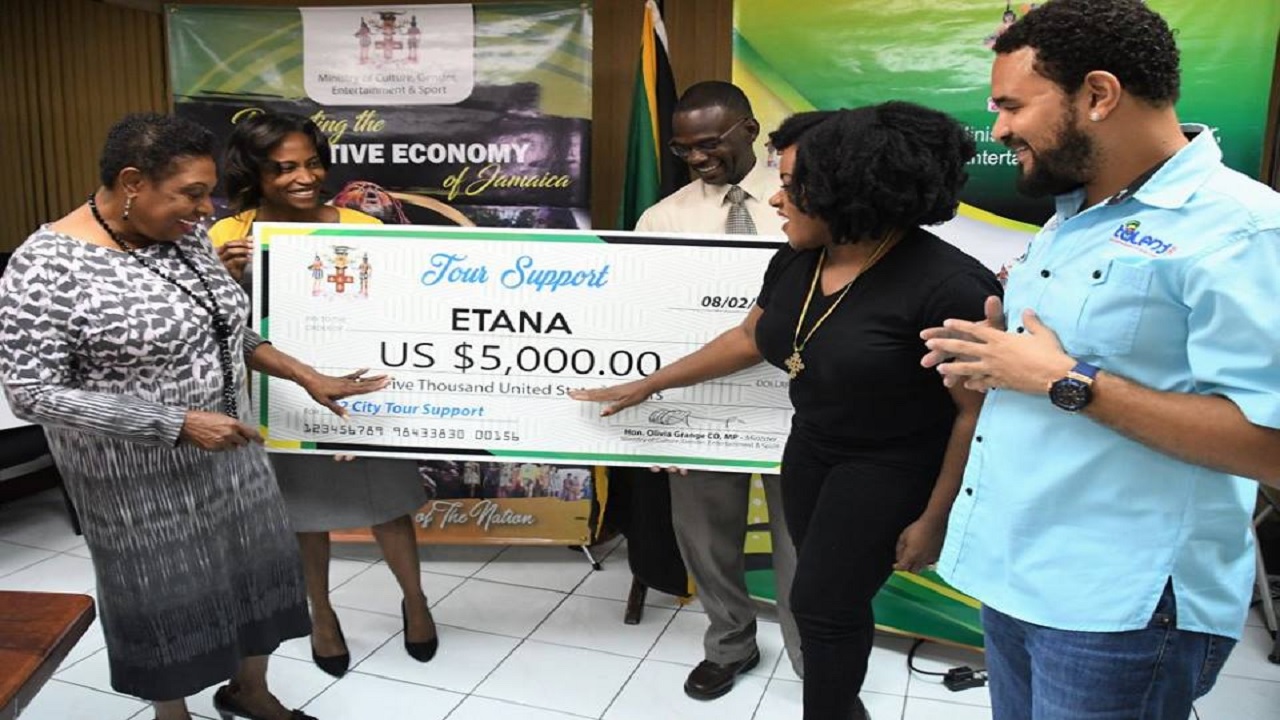 Reggae singer Etana (second right) points to the symbolic US$5,000 cheque while Entertainment Minister Olivia Grange (left) and others look on at a ceremony last week.

Jamaican artistes, who receive funds under the Government’s Tour Support Programme are monitored and evaluated to ensure that brand Jamaica is promoted during their tours.

The programme, which falls under the Ministry of Culture, Gender, Entertainment and Sport, aims to strengthen the country’s Brand through media marketing and partnership.

Senior Director for Entertainment in the Ministry, Gillian Wilkinson McDaniel, said the Ministry is provided with trip reports and other marketing documents.

“All our projects and programmes have a monitoring and evaluation process. We have to monitor and we have to evaluate whether or not it makes sense. We get the trip report. We get all of the marketing documents and so we can evaluate; that is precisely what we do,” she said.

She was addressing a press briefing on Tuesday at the Ministry’s New Kingston offices to discuss the support programme.

Earlier this week, the Ministry announced that reggae artiste Etana had received a grant of US$5,000 to support her 32-city tour of the United States (US).

Wilkinson McDaniel said the Ministry will be assessing the impact of the support, including the number of visitors that come to Jamaica.

“How many tourists does it bring to Jamaica, those are things we have to work out in terms of the quantification with the Ministry of Tourism,” she noted.

She said that artistes may have to undergo some kind of protocol training in relation to what happens while they are on tour.

“How do they act as artistes while they are on tour, how do they represent brand Jamaica, because this is something, of course, that we have to guard jealously in relation to what it is that we say about Jamaica when we are on tour,” she explained.

Support for artistes was provided under the Artiste Ambassador Programme initiated by the Tourism Ministry in 2013 to utilize the brand of touring artistes to sure up and to provide additional marketing for destination Jamaica.

Wilkinson McDaniel said it was recognition that over the decades, Jamaican reggae and dancehall artistes “have been the vanguard and the ones who have held the Jamaican flag high internationally.”

“We know it has been reggae music that has been the essence of the Jamaican brand and so knowing that and knowing the history of Jamaican music and its pull for destination Jamaica, the (programme) was started,” she said.