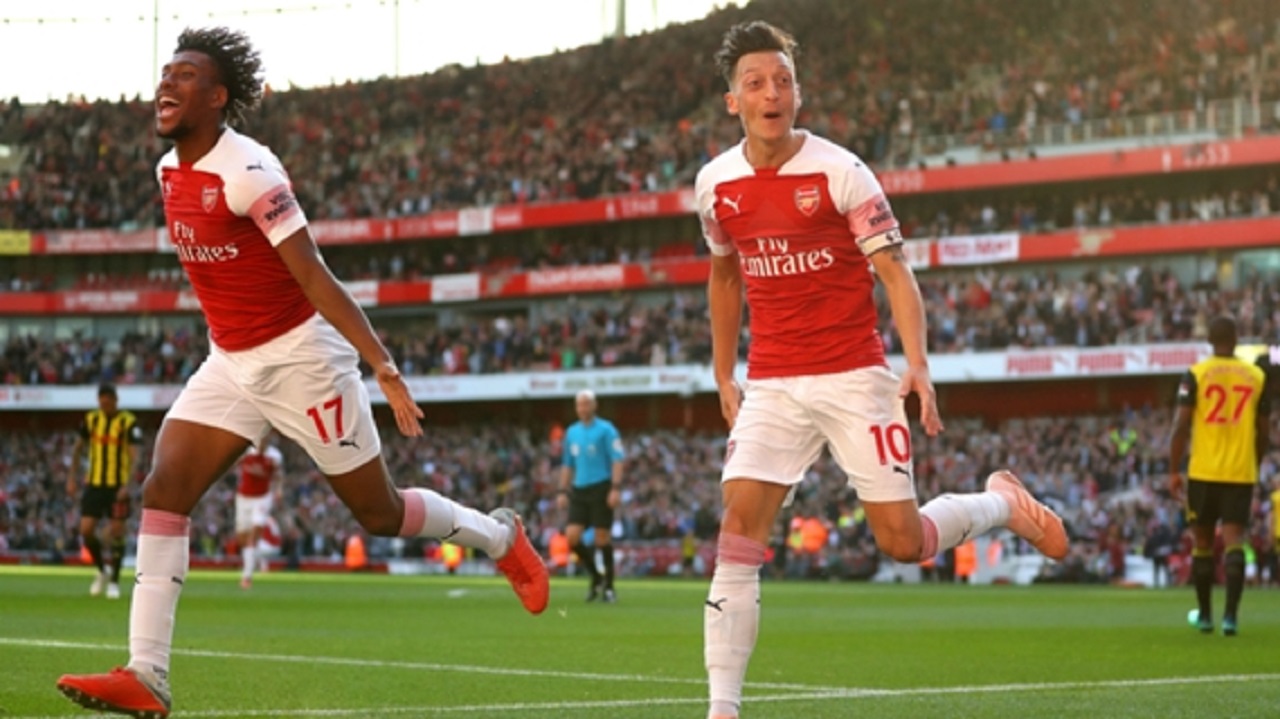 Arsenal struck twice in the final 10 minutes to see off a spirited Watford 2-0 at Emirates Stadium on Saturday and register a fifth consecutive Premier League win.

Unai Emery's side were second best to the Hornets for much of the second half and were indebted to Premier League debutant Bernd Leno – who replaced the injured Petr Cech on the stroke of half-time – for two fine stops.

That gave them the platform to win the game late on as Craig Cathcart's own goal in the 81st minute put them ahead and then Mesut Ozil's strike two minutes later secured all three points.

After an impressive start to the season – which saw them win their opening four games – Watford have now gone three without a win and are in danger of slipping down the Premier League table.

After a lively opening Alexandre Lacazette squandered a golden opportunity in the 15th minute, clipping a tame effort over the onrushing Ben Foster and wide of the post after latching onto Abdoulaye Doucoure's poor headed pass.

Leno wasted little time in making his mark after replacing Cech - who pulled up holding his hamstring after a goal kick - getting down smartly to push Troy Deeney's flicked effort from Roberto Pereyra's free-kick around the past six minutes into the second period.

Lacazette's woes in front of goal continued soon after, skewing his header horribly wide after a sweeping counter attack, before Leno again came to his side's rescue, racing off his line to block Andre Gray's effort.

Substitute Isaac Success clipped agonisingly wide late on before Cathcart turned Alex Iwobi's cross into his own net under pressure from Lacazette.

Ozil then sealed the win with a cool finish from Lacazette's cross in the 83rd minute as Emery's men marched on.

OVER AT GOODISON PARK:  Everton picked up their first Premier League win since August after seeing off Fulham 3-0.

Second-half goals from Gylfi Sigurdsson and Cenk Tosun secured only a second victory of the league season for the Toffees and ended a run of back-to-back defeats.

The win, which leaves Fulham three points outside the relegation zone, extended Everton's record run of wins at home against Slavisa Jokanovic's side to 22.

AT MOLINEUX STADIUM: Wolves extended their unbeaten run to five Premier League matches with a 2-0 home victory over Southampton after late goals from Ivan Cavaleiro and Jonny.

Cavaleiro came off the bench to score on his first top-flight appearance after combining with Raul Jimenez 11 minutes from time.

Three minutes before the end, Jonny also opened his Wolves account to seal the points.

Southampton were resilient in defence but offered very little in attack as their poor start of the season continued – they have now won only one of their opening seven league games.

AT THE JOHN SMITH'S STADIUM: Harry Kane scored twice as Tottenham warmed up for a Champions League clash against Barcelona with a comfortable 2-0 Premier League win at Huddersfield Town.

Kane struck twice in Spurs' 4-0 win in this fixture last season and although Mauricio Pochettino's side could not match that result on Saturday, the striker's first-half double was enough to seal victory.

Spurs were without Christian Eriksen, Dele Alli and Hugo Lloris due to injury, but Kane stepped up with a header and a penalty to follow his spot-kick in a 2-1 win at Brighton and Hove Albion in their last league fixture.

Huddersfield are bottom of the table with David Wagner's men still waiting for their first home league goal of the season, while Spurs move up to fourth.

AT ST JAMES' PARK: Newcastle United were comprehensively outplayed as their winless start stretched to seven Premier League matches in a worrying 2-0 defeat at home to Leicester City.

Forgiving in both boxes and lacking quality in between, Rafael Benitez's side failed to ask regular questions of the visitors on Mike Ashley's first appearance at St James' Park in 16 months.

Benitez commented ahead of the match that he would welcome Ashley's return and his reasons were perhaps evident in a performance that could well have led the club's owner to conclude reinforcements are required.

Jamie Vardy struck the opener from the spot in the 30th minute following DeAndre Yedlin's panicked handball and Leicester's victory, their sixth in seven competitive meetings with the Magpies, was fittingly sealed with a second-half header from the influential Harry Maguire.

Passive for much of the first half, Newcastle were made to regret the two early chances they squandered.

Joselu first dallied over an opening that Maguire's sliding challenge snuffed out, before an unmarked Mohamed Diame headed Christian Atsu's inviting cross past the post.

Maguire was dominant in both boxes and it was his shot that struck Yedlin's raised arms for the penalty that Vardy converted for his third of the campaign.